Too Fast For Love Tour

Too Fast For Love Tour

I have seen the future of boy bands, and man does it have a fucking potty mouth. The “Too Fast For Love” tour, featuring 3OH!3 and Cobra Starship, made one of its last stops at Orlando’s House of Blues, and permanently stained the pure ears of a sold-out crowd of innocent teens with eminently danceable anthems and a non-stop stream of profanity. I imagine shocked looks are being exchanged around the breakfast table the next morning as I write this, as concert attendees ask for the motherfucking orange juice.

I wasn’t too heartbroken about the missing photo pass – I’ve come to always expect some sort of jerkaround at HoB – but walking back to the car to drop off the camera made it too late to catch Chicago’s I Fight Dragons. I was curious about the chiptune rockers, but it seems the crowd was underwhelmed, judging from the reaction when band names were called out later on during the show. If you’re playing classic video game music and a lot of your audience is younger than the Super NES, you lose the power of “retro” and “nostalgia” and instead become target for labels like “antiques.” Still, I’d hope some people’s musical horizons were broadened. 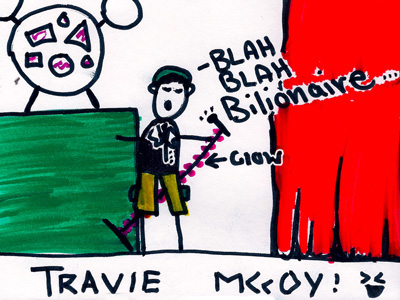 illustration by Tatyana Koss
Maybe not quite a billionaire yet, but there’s potential.

Next up was Travie McCoy, whose debut solo album had been released by Fueled By Ramen the day before. Performing with a drummer and a DJ, Travie entranced the audience from behind a light-up mic stand. I was pleasantly amused to hear a Supergrass loop used as the basis for “We’ll Be Allright.” Other noted samples were some of Michael Jackson’s “Bille Jean” on “Superbad,” and a thumping cocktail featuring Barrett Strong’s “Money” as the opener to the hit single “Billionaire” which had the audience singing along.

While the stage was being cleared for 3OH!3, I took a look around the venue. Sold-out meant a sea of blonde heads stretched from edge to edge of the main area in front of the stage, but the bar area was fairly clear and the usual rush of thirsty concert-goers to the bar between sets was completely missing. Apparently, the desolation at the bar and the general youth of the audience emboldened some of the grownups into maintaining clear lines of sight between their barstool and the stage by harassing the kids standing in front of them into moving somewhere else. Lady, there’s nowhere else – it’s sold out. Try that krap at a Korn koncert, and see what it gets you. 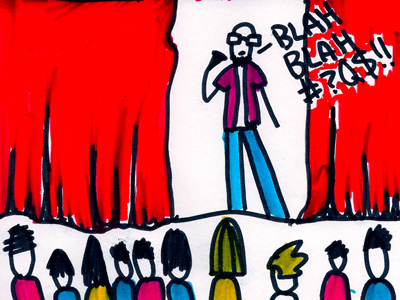 A roar went up as 3OH!3’s backdrop unfurled behind the stage. Across the sea of heads, I could glimpse the reflected glimmering starlight of thousands of cell phone screens, their owners concentrated on texting the news to the person next to them. But there were still another fifteen minutes of preparations to go, and the crowd restlessly waited for something to happen. As the band filed on stage to the strains of an instrumental, the slow-simmering audience boiled into a frenzy. The sound of the opening “Starstrukk” was like dropping a cup of water in a gallon of smoking oil. The air above the floor filled with fans flashing 3OH!3’s gang gesture – hold your hands above your head with the index and thumb tips touching, forming a circle, with the other fingers extended straight out. III – O – III, get it?

The stage at this point featured some whiz-bang colored strobes pointed at the audience. If there were any sufferers of epilepsy at the show, they didn’t seem to experience any seizures. Or maybe the House of Blues’ security commandos displayed their ruthless efficiency and secreted them away before triggering a teen panic. 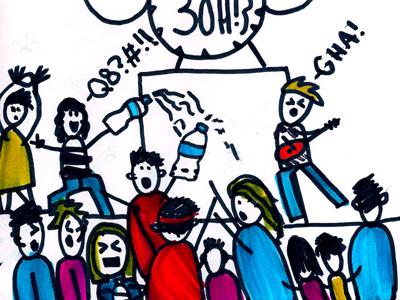 “Put your fucking hands up!” exhorted the band redundantly as they launched into “My First Kiss,” the band’s single with Kesha. The audience sang along, as they did for every song. When the band announced they’d be playing “Chump Change,” to ecstatic cheers, I thought to myself that’s a pretty good name for a song. My daughter corrected me and told me it was called “Chokechain,” a precious little ditty about vicious dogs, real or imagined, who knows. “Don’t Trust Me” was another song that energized the crowd, causing the band to declare them the “best fucking audience on this tour.” Aw, gosh, I bet you say that to all the fucking audiences.

After 3OH!3’s set, it was time to discover a secondary effect from the young crowd’s lack of legal drinking ID – no lines at the bathroom. The mob was restless, but unwilling to abandon their small patch of standing space without the urging of their bladder. Once again, the venue was filled with the sparkling light show of cell phones as the fans passed the time, presumably exhausting the cellular network’s supply of the letters “O,” “M,” and “G.” 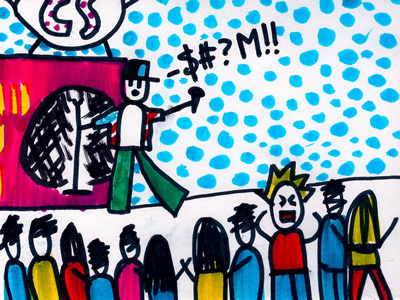 Cobra Starship started their set with “City At War,” rivaling the audience in explosive capability. The strobes had been augmented with a backdrop consisting of grids of small, bright, multi-colored lights for an interesting effect. As the band played, washes and pulses of colored light surged and faded behind them. Unchanged was the prolific swearing – “Maybe I’m not as famous as Justin Timberlake, but I’m a bigger asshole” declared Cobra Starship vocalist Gabe Saporta, to eliminate any possible doubts. Congratulating the audience for being “in on the joke,” the Urugayan-born Saporta made good use of his roots in punk band Midtown to maintain an intimate air of fuck-everyone-else rebellion. Victoria Asher, the sole female on stage that night – a stark contrast to the nearly all-girl audience – strutted about in a vintage dress and a keytar, providing anachronistic counterpoint to the testosterone freakshow.

There is a gang sign for Cobra Starship as well – make a fist with your right hand with the index and middle fingers extended, and place your open left hand behind it. Kinda looks like a cobra, ready to strike, doesn’t it? I don’t think so either, but that didn’t stop the audience from turning the floor into a snake charmer’s nightmare, should the charmer have enough imagination to see hundreds of waving pasty adolescent arms as viciously poisonous reptiles.

The third or fourth Michael Jackson reference of the night opened Cobra Starship’s big hit, “Hot Mess,” and Saporta’s role was made redundant as the audience screamed out the lyrics amidst a shower of colorful balloons, which lasted for another couple of songs, bouncing from one edge of the crowd to another before the curtain came down. The teens nervously told each other of the existence of an “encore,” a song that is played after the band pretends they’re done. Saporta’s cynical explanation of contractual obligations for encores probably went over most of their heads, but there’s no doubt they appreciated “Good Girls Go Bad,” the first single off their recent Hot Mess album.

As soon as the lights went on, the audience quickly and dutifully filed out of the venue, years of lunch-line etiquette still fresh and dominant in their minds. There was very little finishing up of drinks, or last-minute pit stops before hitting the road.

Stripped of the fans’ fervor, the music that night would have been somewhat humdrum. Beat-heavy dance rock with self-aggrandizing lyrics, excessive cussin’, and monster synth riffs is hardly enough to make for a distinct youthful musical movement – that’s not the point. Genres will come and go in popularity, but there will always be a market for music that pisses off your parents. Now pass me the motherfucking orange juice.