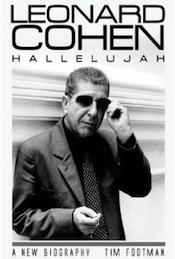 I’ve said it a million times, Leonard Cohen is the epitome of everything great. The sexual, intellectual, depressing romanticism that makes up Cohen is the greatest thing I’ve come across in perhaps my entire life. Tim Footman’s biography on Leonard Cohen, respectfully called Hallelujah, breaks down Cohen’s life one chapter at a time. From Montreal, to London, to Hydra and Cuba, over to New York and back to Canada, Cohen finds himself surrounded by beautiful and interesting women, different cultures, other artists, drugs, and all those “things” that make an artist’s life worth putting down on paper. Footman does an excellent job of breaking down each of Cohen’s books and records, relationships, and dips and dives into different religions with facts, personal opinions, and brilliant quotes that are more poetic musings, almost, from Leonard himself. The pictures in the book are superb, of course, and show Cohen in different stages of life up to a recent picture of the aging playboy.

The two chapters in this book that I was ecstatic to see were one on the song “Halleljuah,” where it’s discussed and pulled apart for our reading pleasure, and the other chapter comparing Cohen to Bob Dylan. First off – finally! Someone who understands that “Hallelujah” is about sex. Did the contestant on American Idol know this, or Justin Timberlake when he sang it on the Haiti benefit special on television? Probably not. It amazes me that people no longer listen to the lyrics in songs anymore, or maybe they do and can’t put two and two together. And how many times have I had to introduce Cohen’s music to people who are Dylan fans but have never heard any of Cohen’s music? Too many! Dylan is cool and all, but I think he’s overrated, and way too many young train-hopping kids are into him for facile reasons. Fellow music snobs (and idiots), please read these two chapters. I like how Footman also references Nick Hornby’s book High Fidelity at the end of his own book and gives us his Top 10 Leonard Cohen songs. Don’t worry, I won’t bore you with mine… although “One of Us Cannot Be Wrong” is definitely #1.

Leonard Cohen was born in 1934. In 1944, Nathan Cohen, Leonard’s father, passed away. A nine-year old Leonard wrote some lines down on a piece of paper, tucked it in his father’s tie, and buried it in the family’s yard – to me, in a symbolic sense, this is when the true poet and romantic was born. In Footman’s Hallelujah, he tells us that Cohen wasn’t actually born until 1949 when he discovered Frederico Garcia Lorca, bought his first guitar, and attended his first concert. Read this book, get acquainted with the man, and then we can compare mythologies.