It’s not summertime until the smell of sizzling sunblock mingles with that of fried fair food, and the sight of nearly nude sweaty bodies paints the otherwise green landscape with varying degrees of sunburn. It’s the dead of July, and it’s the Warped Tour. The lineup isn’t as important as the experience, nay the tradition, of a day of music that begins at 11am and doesn’t wrap up until the sun has set and your body is near collapsing. 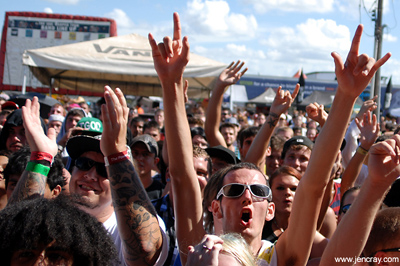 Jen Cray
Fans cook themselves in the name of music.

The Orlando stop of the tour, now in its 16th year, was initially scheduled to turn the streets surrounding Firestone Live into a sprawling urban edition of the fest, but was relocated to the greener pastures of the Central Florida Fairgrounds at the last minute, due to overwhelming ticket sales. Just as well – with the heat index clocking in at 108 degrees that day, setting up the tour on blacktop instead of grass would have been torturous for bands and fans alike. The sun was a key factor in the day’s festivities, leaving the beer stands empty but the lines at the water fountains constant. 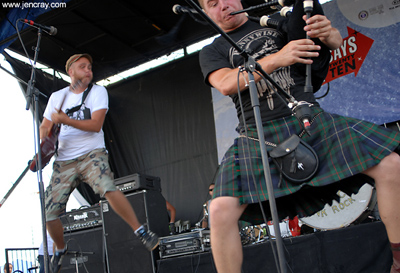 With about 75 bands to choose from, spread over seven stages and nine hours of playing time, every fan’s itinerary is unique. As is most often the case, the bands that drew the largest crowds tended to be the ones that made my ears bleed (is it really necessary for every band to have a screamer?!). Meanwhile, some of the best acts on the tour found their audiences to be barely big enough to call a “crowd.” 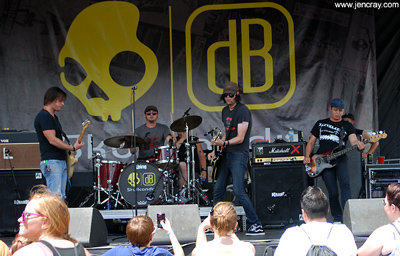 AM Taxi is a Chicago band, borne from the ashes of Lucky Boys Confusion, that takes to heart The Clash and The Replacements, but doesn’t shy away from the influence of purely pop ’80s hits like “Jessie’s Girl,” or “867-5309.” There’s a fantastically frivolous melody that rests below every song that’s saved from saccharine overload by the just-raspy-enough vocals of Adam Krier. Even in the noon-day sun, they laid down a foundation of cool, and got the handful of asses in front of their small stage shakin’. 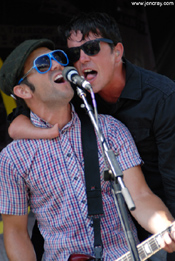 Also creating a minor stir in one of the nooks and crannies of the grounds, Far From Finished filled the air with guilty pleasure pop punk straight outta the Alkaline Trio playbook (who played later on in front of a much larger crowd). With just a hint of Irish flavor to Steve Neary’s vocals, this Boston band should have attracted the folks who were stomping it up earlier in front of Celtic punkers Flatfoot 56, but their youthful jubilation may have been a touch too sweet for their audio tastebuds. Don’t shy away from the melody, guys! What would this festival be without three chords and a catchy chorus? Celebrate the pop punk! 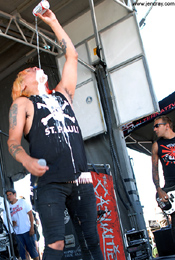 Jen Cray
The Casualties’ Jorge Herrera downs a cold one.

For those looking to up the ante a bit and get their mosh on, The Casualties are always a sure thing. Vocalist Jorge Herrera, whose trademark spiky hairdo was on vacation for the day, kicked off their set by pouring a Budweiser as much down his chest as down his throat. The colorful crew are Warped Tour veterans and never fail to pull in a rowdy crowd, but today their set conflicted with that of Riverboat Gamblers – which meant I had to cut things short and push my way through the open field in front of the world’s tiniest stage in order to catch the best band that most of you Warped Tour-goers missed. 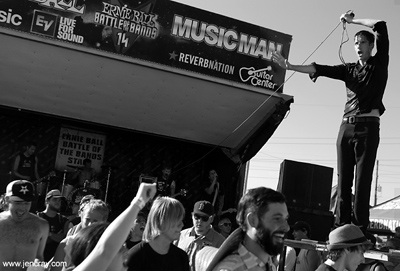 The Gamblers, and front man Mike Wiebe in particular, will put on a memorable show regardless of who’s watching. For instance, what other singer – in 30 minutes time – will climb a speaker stack that towers high above the stage, crawl out onto the hands of the crowd, and drag a portable piece of stage equipment out into the midst of the people to perform on top of while also talking the fans into a slow-then-fast circle pit? Entertainment for your eyes, and songs so bouncy they’ll make your head pop right off your neck! This is the group to plan your day around. Need another reason to love and support this Austin band? They’re selling t-shirts in which their name takes a backseat to the slogan “Mel Gibson’s an Asshole.” 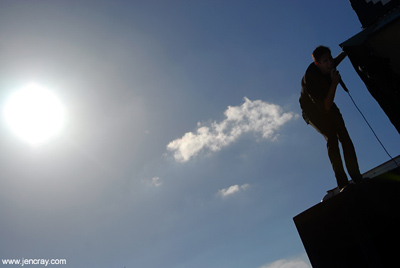 Jen Cray
A Gambler sizzles on a speaker stack.

Meanwhile, on the main stage, Andrew W.K. did his best to turn the daylit fairgrounds into a seedy nightclub with plenty of dark corners for doing naughty things. The wild-man with the Cheshire grin brought his aerobic instructor wife with him on tour and put her on the stage as a kooky addition to his “Party Hard” approach to entertainment. It was odd, quirky, a little nonsensical, but fun – much like Andrew W.K.’s music. 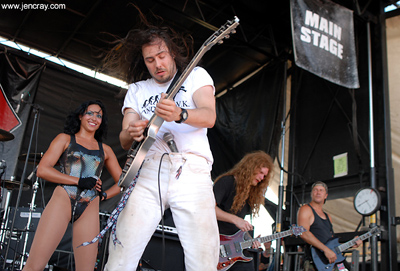 Ska, an ever present element of the summer fling tour, was felt in the form of Reel Big Fish and Streetlight Manifesto. The horns’ll get ‘em bouncing, but it was the screamo breed of metal that got them losing their minds. Every Time I Die got the blood boiling soon after doors opened, but it was The Dillinger Escape Plan that put the blood on the floor. With their hulking front man, Greg Puciato, and a whirlwind of band members constantly flailing around him, this so-called math metal band is one to witness – whether you can handle their audio fireworks or not. 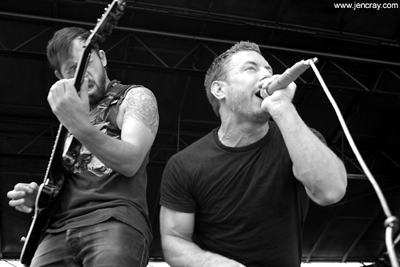 As the afternoon faded into the approaching sunset, more and more bodies could be seen looking for the sweet release of shade. It was while I, too, was catching my breath that I stumbled upon one of the happiest surprises of the day. The Upwelling is a modest trio from Queens that sounds like how The Lemonheads would have sounded had they had a little more confidence. Their sweet little set was heartbreaking and pretty one moment, and raging with epic yearning the next. They also somehow managed to mash up “London Calling” with “Welcome to the Jungle” for a blink-and-you’ll-miss-it snippet of a song. 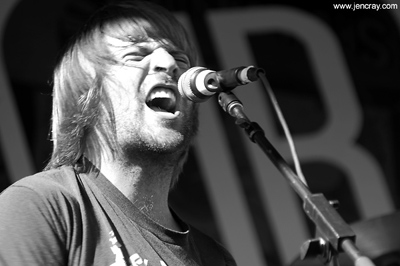 After sundown, as the remnants of the day are being scrubbed off of thousands of sunburnt bodies, the myriad of tour buses and vans packs up and hits the interstate on the way to the next day’s party. For two solid months, the Van’s Warped Tour will ravage cities all over the country with its traveling circus. You’re not too old to enjoy it, line up and get your ticket… but don’t forget the ear plugs and sunblock.