The Walker Brothers: No Regrets

The Walker Brothers: No Regrets

by John and Gary Walker 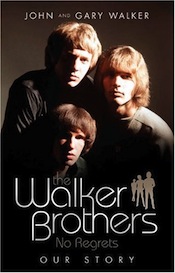 For a brief time in the “Swingin” Sixties, Beatlemania wasn’t even a patch on Walkermania. Three skinny California boys with great cheekbones, incredible hair, and godlike voices bewitched an already “over-excited” teenage audience in the UK with songs that were made for the highwire emotions of adolescence, but utterly at odds with the prevailing paisley popmood of the time. The music of the Walker Brothers was lush, stately, and orchestrated, dripping with gothic grandeur and existential despair. This was due in no small part to the exquisite baritone of focal point Scott Walker. Soon pushed into the uncomfortable role of frontman, Scott Walker wilted in the spotlight, becoming shy and withdrawn, retreating behind sunglasses into a world of avant-garde music, existentialist literature, and Bergman films. Increasingly alienated from his two bandmates, the Walker legend grew on the strength of ever-more grandiose numbers like “Archangel” and apocryphal tales like the one that had him attempting to escape his frenzied fans behind the walls of a monastery, only to have it besieged by fans to the point where the monks made him leave. Soon enough, the Walker Brothers went their separate ways, and all eyes were on the erratic career of Scott, one that veered between melancholy ballads, proto-krautrock, and teethgrinding noise. Scott Walker’s tale is one breathlessly told and retold by fans, besotted journalists, and fervent acolytes like David Bowie and Jarvis Cocker. All have a vested interest in maintaining the Walker mythos. No Regrets is under no such obligation.

The firsthand look inside the Walker machine is invaluable, and since Scott ain’t gonna be talking anytime soon, this is the only primary source look at Scott Walker’s early years aside from a short segment in the 30 Century Man documentary. John and Gary Walker (vocalist and drummer in the Walker Brothers, respectively) take turns telling their stories with clear-eyed and honest objectivity. Without any obvious axes to grind, there is a somewhat “Innocents Abroad” style tone to their tale of how three young California boys formed a band, took their show to England without any clear plans, became pop sensations, and fell apart, without even knowing why. Along the way, the reader will find answers to longrunning Walker headscratchers like why they never toured America, why they reunited in the Seventies, what happened to their period performance footage, and did Scott Walker really attempt suicide?

The drawback of this book is that it’s disappointing in the same way that the Gary Numan biography was disappointing. (Why wasn’t he walking slowly around neon-lit rooms in jumpsuits all day and night?) The clunky wording, the overly earnest sentiments, each seemingly going out of his way to prove that he (and by extension, the rest of the Walker Brothers) was in no way anything other than an ordinary, laddish musician. That’s not what we want! We want to think that the “other two” were every bit the tortured artist and aesthete that Scott Walker was – maybe all three of them sat around listening to Jacques Brel and reading Sartre and smoking cigarettes, maybe, maybe? Alas no, John and Gary even admit to finding Walker’s interests in avant-garde music and French philosophers a little “boring.”

While it is useful to have John and Gary around to call bullshit on fervent Walker mythologists (both even hint that Scott’s suicide attempt at the height of Walkermania MAY have been a publicity stunt), A Deeper Shade of Blue draws particular attention, and one can only imagine their reaction after seeing the 30 Century Man, but c’mon myth and popular music go hand in hand. All the way back to Paganini playing a violin supposedly strung from the entrails of a dead wife! For as long as Scott Walker holds his own history in a Stalin-esque grip, No Regrets is a useful tug at a curtain of solitude, dark sunglasses, cigarettes, art films, noise, and depression with which he has surrounded himself.