Trips down memory lane can be risky propositions. There’s always the danger of disappointment when seeing – and/or hearing – elements of your past with more weathered pairs of eyes and ears. The subject could appear much smaller or less important now, or your aged, jaded sensibilities may prevent you from enjoying things as you once did. 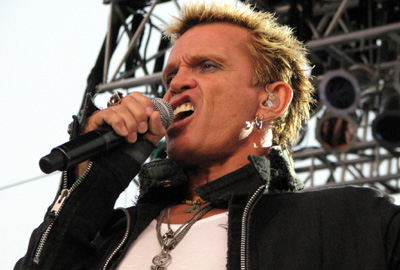 Therefore, I was not surprised to find myself hesitant to go see Billy Idol as he started his American tour on August 5. After all, I’d witnessed the over-the-top spectacle of the Whiplash Smile Tour (with The Cult opening) in ‘87, and, as a 16-year-old, caught Mr. Idol during his career-escalating Rebel Yell jaunt during the heady musical year of 1984. Would a third encounter, after two decades of the singer’s relative inactivity, be tempting fate? I almost decided to let this section of the past alone, lest Billy Idol tarnish my memories with a rote, by-the-numbers revue.

I should have given this ’80s icon more credit. Under the stars in front of a sellout crowd at the Tulalip Amphitheatre (an hour’s drive north of Seattle), Idol not only delivered the past in all its glory, he delivered the present. With his old sidekick Steve Stevens and a hot new band behind him, Idol put on a very energetic show that was surprisingly fresh and relevant in 2010. 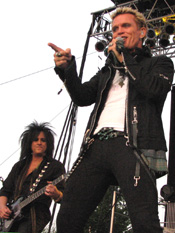 Indeed, there was little time for nostalgia as the crowd was caught up in the moment. A huge sea of plastic chairs, carefully arranged, proved to be merely place-holding obstacles.

Like a boxer somehow serving as his own ring announcer, the master showman took to the stage roaring, jabbing, cajoling and sneering. And, at 54, he looked as if he could go a few rounds. Yes, Idol’s craggy face showed wear, but the body – twenty years past the motorcycle accident that almost crippled him – moved about the stage incessantly, striking the Elvis and Gene Vincent poses that he has leased for the past 30-plus years. And Billy Idol can still sing! Throughout the night he seemed hell-bent on proving that fact, carrying notes and howling his banshee howl with surprising strength.

“Ready, Steady, Go.” Holy moley… the first song, and first welcome surprise, of a career-spanning set that included three other Generation X classics – “Kiss Me Deadly” with the rumbling “King Rocker” and “Running With The Boss Sound.” 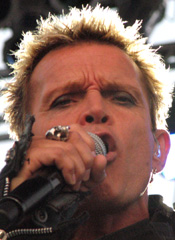 The show was about as polished as a Billy Idol concert could be; the songs were essentially extended versions of the studio cuts, which in this case wasn’t a bad thing. However, there were a few delightful tangents and variations, provided by Stevens and mind-blowing keyboardist Derek Sherinian (ex-Dream Theater). Dispelling any old notions that he was an effects-reliant player, Stevens flavored several songs with acoustic guitar, beginning with the often-overlooked gem, “Sweet Sixteen.” The pair tacked on an extra-long, delicious prelude to “Eyes Without a Face,” adding to the wait for the famous guitar solo – Stevens could play that one in a coma, but it still raised the hairs on the back of my neck. 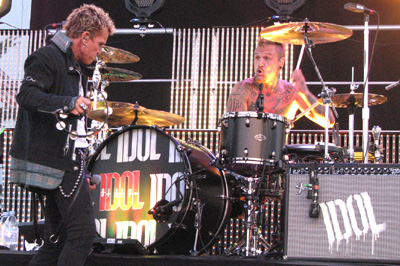 Sherinian soon dropped clues that he might be a Keith Emerson disciple, with a penchant for re-creating early analog synth sounds as a counterpoint to slightly more modern fare. Billy Idol meets prog rock? I had the feeling that the virtuoso would play bits of “In the Court of the Crimson King” any moment, and hot damn, I think he almost did. After his fantastic nod to the Lizard King, “L.A. Woman,” Idol and rhythm section (Billy Morrison, guitar; Stephen McGrath, bass; Jeremy Colson, drums) left Stevens and Sherinian to their own devices. The latter began their interlude with a sweeping medley of vaguely familiar notes and chords, including “Tom Sawyer’s” signature noodling, before Stevens took over, tearing through classical riffs – and a purloined Zep intro – like a spiky-haired Segovia. 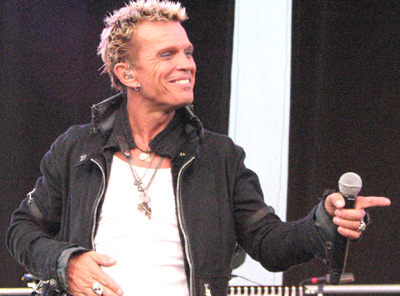 As straightforward as the prerequisite hits were, Idol’s choice of “filler” was bold and a bit inspired. Besides the bonus points for Gen X songs, Idol scored with a blistering “Blue Highway” and the sole offering from Devil’s Playground, “Scream.” “Kings and Queens of the Underground,” a new composition, proved to be a fascinating and somber autobiographical tale. Another new song, “Love is Strange,” was another winner, chock-full of trademarked swagger and go-go rhythm; “Scarred For Life,” however, lacked the Idol charm – even Stevens’ pyro_fret_nics couldn’t save the oddly generic tune.

What, no “Hot in the City,” no “Cradle of Love?” Personally, I would have appreciated another selection or two from the Whiplash Smile album, as well, but Mr. Idol was too busy snarling to take requests. 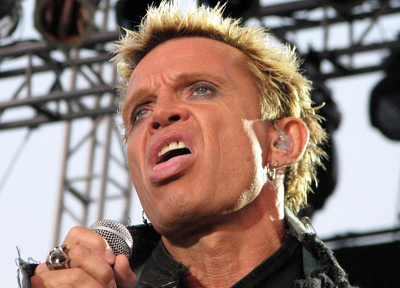 “White Wedding.” “Dancing with Myself.” “Mony, Mony.” I knew all these songs, but had forgotten just how many great ones Idol had under his belt. I was reminded, over and over again, how unique and versatile this performer really was. Billy Idol, the self-promoting punk-turned-video star-turned-middle-aged icon kept his image – and our collective memories – alive and well that night.