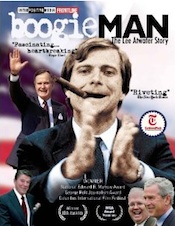 The most sickening thing of all is that he didn’t believe a word of it. Lee Atwater was no flag-waving Republican, no true believer. He saw early on that, as Robert Novak puts it in this stomach turning documentary, “Republicans will say anything to get elected.” Atwater aligned himself with Republicans because it was the quickest way to make the biggest splash, get on the fast track to D.C. and fame and fortune.

And fame and fortune he got. In doing so, one could lay literally hundreds of thousands of dead bodies at his feet. For he gave us Reagan and the Bushes. Taking the lessons he learned at the feet of early mentor Strom Thurmond, (basically how to say “nigger nigger nigger” in polite company), he created the infamous Willie Horton ad that helped defeat Michael Dukakis in 1988. Reagan aide Ed Rollins called him “Oliver North in civilian clothes” – a chilling thought.

Chilling because men like North and Lee Atwater have no use for democracy. The only thing that matters is the winning, and anything you do to attain that goal is allowable. Trade arms for hostages. Run drugs in Central America to buy guns off the books. Throw out the most outrageous slanders, such as announcing that Kitty Dukakis once burned an American flag at an anti-war rally in the Sixties. Who cares if it’s a lie? Winning the election is the only vindication you need, and once in power, who’s to question how you got there?

He mentored Karl Rove and played blues guitar with B.B. King. And in the end he died of a rotting cancer in his skull. Some would call that karma, but we are not to know these things. Watching this masterful documentary will enrage any actual American patriot as you witness the seeds of the destruction of our democracy brought about by a smirking, slimy con man who grasped the utter inhumanity existent in the Reagans and Bushes of the world and ran with it. We now have an entire media network that runs as a 24/7 homage to Lee Atwater. Fox and its grotesque distortion of reality, Breitbart and his video fakery, all are straight out of the Atwater playbook.

Watching this movie, my wife remarked that if we could go back and kill Lee Atwater when he was in high school, what a different world we would have today. Oh so true. It would not be a perfect world, but without the malevolent presence of a totally amoral Republican party, emboldened with the take no prisoners style perfected by Atwater, it would be, one would hope, a more honest place.

Lee Atwater was a mean guitar player. Too bad he played America even better.