The sign posted at the entrance to Backbooth, for the Phantogram show that warned of “massive” amounts of strobe lights could have easily read, “prepare to have your mind teleported to another dimension.” Those unprepared for the onslaught of strobe lights doubled over with random flashing video sequences projected on a white screen behind the band (as well as on the band themselves) should close their eyes, or find a dark spot in the corner of the club from which to listen because the visual effects of the Phantogram live show can be a bit overwhelming for sensitive optic nerves… but for those able to stomach it, it’s quite an awesome mind meld! 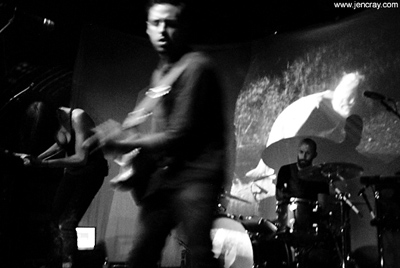 Opening the gateway into the night was the drummer for experimental indie band WHY?, Josiah Wolf. His solo jaunt finds him partnered with Liz Hodson, because no matter how many instruments Wolf is capable of playing he can’t play them all simultaneously… though it’s not for lack of trying! 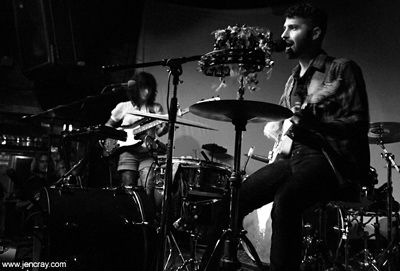 Strapped in behind a drum kit with a guitar slung across his shoulder and microphone positioned toward his face, the one-man-band juggles the beat, the melody, and the vocals. Impressive and highly hypnotic as this feat is, I couldn’t help but wonder: why not employ a couple more band members to shoulder the burden? Hodson holds down the low end, offers up some dreamy sounds on the xylophone, and contributes some lush Mazzy Star-ish vocals on ‘most every song. Which begs another question: If there are two of you on stage, and you both equally share lead vocals, why not name your group rather than just going by your given name? Just a few thoughts that swirled around my brain during an otherwise beautiful opening set by Josiah Wolf and partner. 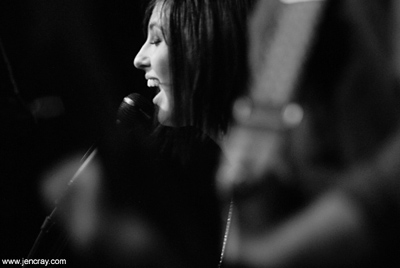 Snuggled in tightly around the low corner stage, a few hundred Orlando new-music-seekers surprised New York’s Phantogram with a nearly full-to-capacity turnout. With the exception of an inexplicable handful whose poor concert etiquette ruffled a few feathers, the crowd was jacked in and ready for lift-off – the sort of lift-off only capable of being delivered by this new school of indie electronic rock bands.

With a live drummer on board for the tour, the trippy and lush landscape created by Josh Carter (guitar/vocals) and Sarah Barthel (keyboards, vocals) was given a sexier groove. Drum machines are fine on record, but there’s no imitating the primal pulse brought to the table by an actual drummer. While the flesh and blood beatmaker Tim Oakley worked his magic, Carter and Barthel twitched and twisted – while swallowed up inside of the kaleidoscopic images projected on and behind them. The effect, further driven home by the ambrosial vocals of Barthel and the way it clashed into Carter’s trip hop approach to singing, was otherworldly. 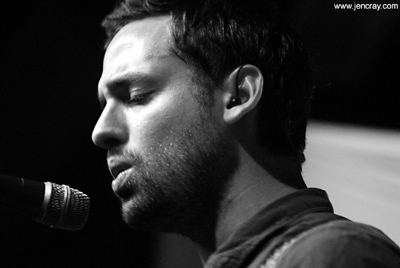 Having just the one full album, Eyelid Movies, to create a set list around, the performance was cut short for lack of material. What the night was lacking in length it more than made up for in mood. “Running From the Cops,” for all of its electronic vocal effects, was stark and sexy (think Nine Inch Nails meets Portishead). “Mouthful of Diamonds” elicited cheers from its opening riff and sunk its teeth into every brain in the room like an ecstasy-inducing parasite. “When I’m Small,” the album’s crowning jewel, had much the same reaction. Like The XX, whom they recently toured with, Phantogram have found a way to make modern trance music sound downright tribal. The result is hypnotic. 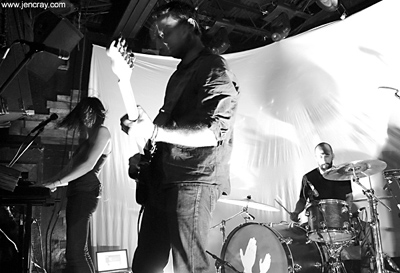 Bodies swayed, eyes closed, and the frenetic strobe lighting illuminated and darkened – in equal measure – the shared experience of the crowded room. It was just a Friday night in downtown Orlando outside, but inside of Backbooth it was a way hipper dimension.