Forever Changes: Arthur Lee and the Book of Love

Forever Changes: Arthur Lee and the Book of Love 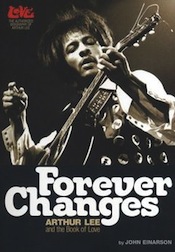 Sometimes you can tell the pioneers by the arrows in their backs, but more often all they leave behind is an abandoned homestead overgrown by vines. That pretty much describes the remnants of Arthur Lee and his ground breaking group Love. Coming out of post-Watts riot South Central LA, he discovered music but had little formal training. But his inability to read music didn’t prevent him from making rock and roll; he and his buddies charged ahead and soon ruled the Sunset Strip scene. Folk music had grown into folk rock, and the record companies began to smell the stink of money in the crowds of unwashed hippies. Arthur Lee helped lead the charge: Love put blacks and whites on stage and in the audience as friends and equals. “This is what we were talking about,” thought the civil rights crowd, and when Lee incorporated jazz and then symphonic sounds, his fellow musicians thought “This is far freakin’ OUT!” LSD, cocaine, and heroin were in the mix, and that began his downfall after three meteoric albums. Lee kept an iron grip on the band, yet they missed some important opportunities. Besides refusing to play the first Monterey Pop Festival, Love never toured, as Lee feared the racism of the Midwest and the South. Once the dope kicked in, the Doors picked up where Love left off, and Lee’s star was eclipsed. Post-success led to the usual string of failed reunions, partial rehabs, changing public tastes, and jail time. Eventually leukemia took him into the murky obscurity of failed musical innovators like the MC5, fondly remembered by a few old vinyl collectors and aging DJs but a cipher to the rest of humanity.

Lee wrote a partial biography shortly before he died, leaving long periods of his life blank and more questions than answers. Einarson, a professional with nearly a dozen similar biographies under his belt, took the manuscript and fleshed it out. Interviews with Lee’s remaining bandmates, managers, girlfriends, and anyone else who knew the man fill most of the book. The drugs and debauchery are presented in a neutral, flat tone, the research is thorough and solid, and I can’t imagine an unturned stone in this book. That’s the strength of Forever Changes – and its weakness. Halfway through the book I began to dread the remaining pages. Einarson’s dense prose and repeated examination of every facet of Lee’s existence was sapping the joy out of rock history. Einarson’s writing flows, but very slowly, and after a while I saw Lee as a jerk who was nice to his mother but ripped off his bandmates and treated his women like dirt. The best part of the story is the depiction of Sunset Strip at the height of the hippie movement, but by the time I reached the index, I felt like I’d been beaten with a paperback edition of Gravity’s Rainbow. Rock and roll sure ain’t pretty.