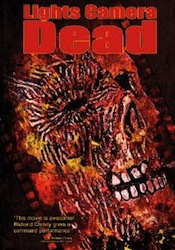 You never know what you’re going to see when you get one of these low budget slashers in the mail. I’m happy to say that this one is clever and entertaining and goes for an engaging plot with liberal doses of humor before the blood splatters. It’s almost like… foreplay. Ryan Black (Reid) believes the action and effects of this film-within-a-film are most crucial while his writer Steven Didymus (Lira) relies on the text to deliver the subtext in this direct-to-VHS epic. We begin with the screen test. Some of these actors’ tests are so bad they could be standup comics in real life. The cast settles down to large-breasted Melanie (Monica Moehring), Ryan’s girlfriend Kari (Lollo), and the hostile production assistant Ted (Coldon Martin). Ryan and Steven are perfectionists; they believe the audience wants the actors in frame, loud enough to hear, and if possible, off book. The rest of the crew regards this as unnecessarily arty considering they don’t get paid, bringing immediate tension to the production. Soon production collapses with maybe 15 minutes of footage in the can. When the editor (Hunter White) tries to quit, Ryan and Steven accidentally kill him. This gives them an idea, and soon the whole cast is called to a “preview” in an abandoned cabin, deep in the woods, late at night, and out of cell phone coverage. You would think kids know better these days, wouldn’t you?

I think the cast was more scared of each other than you’ll be of them. There’s plenty of hacking and spurting, and Melinda really is a great scream queen. The dialog is witty and snarky, my favorite G-rated line being “He’s the director; he’d never assign himself such a menial task.” My favorite R-rated line is “There will be no testicles sucked here unless Melanie does it.” There are more, but I giggle when I try to type them. Ryan and Steven are great as the obsessive filmmakers who let nothing block their artistic vision. A few of the actors can actually act; Lollo’s Kari was excellent and supporting actors like Ashby Brooks as the doomed PA and Richard Christy as the drum-obsessed composer were especially enjoyable. The gore is secondary – this is a really a film about film-making best enjoyed by film buffs, but as a comedy it shines.