Oh, man. Just got back from the Caribou show at Backbooth in Orlando and I sure feel torn. The show was over too quickly, but on the other hand, I managed to make the drive home to Melbourne before midnight. 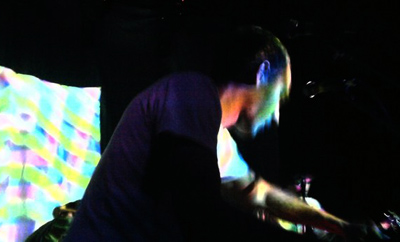 Canadian multi-instrumentalist and math genius Daniel Snaith, augmented by a fine trio of real live musicians, delivered a hell of a show to wall-to-wall head-nodders, some of whom I recognized from the Yeasayer two weeks earlier. Suffice to say, Snaith brought down the spirit of Brian Eno to the shoegazing masses, tweaking his synthesizer for all it was worth like Paganini sawing away on a Stradivarius.

But that wasn’t all he played. Snaith banged away on real drums, shook a tambo, played a plastic flutophone and strummed an electric guitar while the rest of the band stuck to their instruments, plus one (usually synth) – Ryan Smith on guitar, John Schmersal on Hofner bass(!) and Brad Weber on drums (more about him later).

Sorry to say, I didn’t catch opening act Arp, but from what I could tell they seemed like a pretty good fit with Caribou. 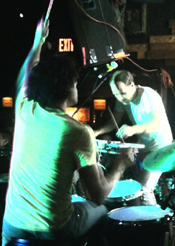 It was mostly a trance-heavy show, the band performing before a drop-cloth of a backdrop with abstract lighting projected on it, and lots of electronic pings and tweaks and a heavy dose of tunes from his/their latest album, Swim. After many extended, wordless synth solos, one exasperated concertgoer sighed, “Oh, God. Please play ‘Odessa’!” probably the most recognizable song off of the album.

They broke it up with the more pop-tinged numbers from earlier albums, like “Hendrix With Ko” off of Caribou’s 2003 release Up In Flames, and probably the closest thing Snaith has ever come to producing a hit record. The accessible songs were appreciated, but I would have preferred more from the psychedelic pop-tinged Andorra.

For all their electronic noodling, Caribou was one of the most organic, dynamic, natural sounding, and hard driving acts I’ve heard in awhile. I credit that to the strong bass-and-drum pairing of Schmersal and Weber.

But Weber, what an inspiration. Standing behind him in the cramped theater, I was amazed how fast he moved those drumsticks – like a hummingbird on speed. He was without a doubt the strongest, most energized and hardest working man on stage that night. 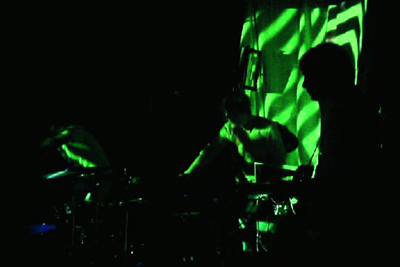 And it made me realize that if your music tends to be wispy and high-voiced, you’d better bring a really good drummer on tour to carry the sound over to the audience. Man, what a performance.

Oh, and they did perform “Odessa” as the finale, only to come back out moments later for a 10-minute version of “Sun,” both off of Swim.

It was well worth the drive.