Why, oh why aren’t Phoenix huge?! Not only is their music a perfect blending of The Strokes and Cut Copy, but their live show has got the sort of bells and whistles usually employed by the big guns like Muse. 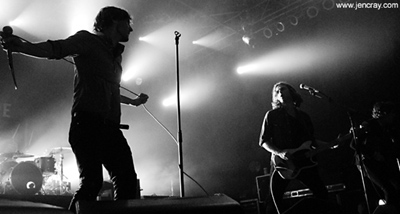 A sold-out crowd at the House of Blues greeted the French band for their first show on Orlando soil. 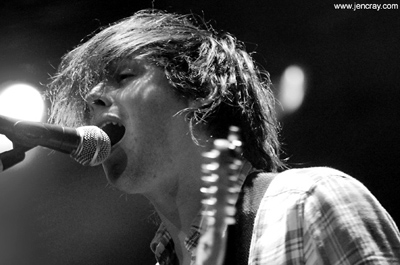 For all the anticipation that was cumulatively felt in the room for the night’s stars – and I was feeling it every bit as much as the rest of the 2,500 folks – opening band Wavves’ inclusion on the bill also had me tickled pink. Looking like a pizza dough stretched too thin, the three members that make up Wavves may as well have been in separate rooms, they were spread so far apart on the large stage. The lack of physical intimacy did nothing to thwart their abilities to pull the audience into their snotty, grungey, surf punk sound. 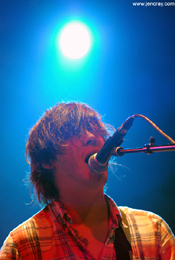 The master at the helm, singer/guitarist Nathan Williams, effortlessly kept all eyes on him, even while hiding beneath his rat’s nest hairdo. With hardly any talk beyond the expected mention of Disney World and Mickey Mouse, they managed to cram “King of the Beach,” “Super Soaker, “Post Acid” (prefaced by Williams with the confession, “this song’s about doin’ a lot of acid”), and a half-dozen other songs into their short time under the lights.

Eccentric, crunchy, and filled with white noise at times, Wavves are raw and unrefined, and that is gloriously refreshing! 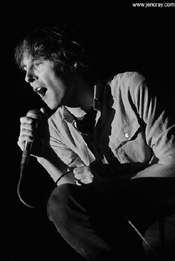 Floating through thick bursts of fog and lit only by a pair of bright white spots that shotgunned on and off to a dizzying degree on either side of the stage, Phoenix arose with a bang – launching into one of their biggest hits without pause. “Liztomania” was their chosen form of “bonjour,” followed up with a hysteria-inducing, in-the-crowd performance of “Lasso.”

Five minutes into the night and frontman Thomas Mars had already crossed the bounds of the security pit and thrown himself, body first, into the arms of the audience. Allowing the fans to touch you, why that’s like tossing out mini candy bars to trick-or-treaters – you’re bound to be a hit! 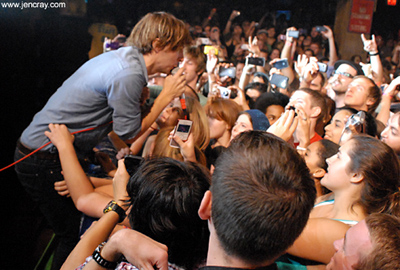 Jen Cray
Mars in the crowd

But Phoenix are not a band to rely merely on old tricks of the touring trade; they backed up their communion with the crowd with solid skills and surprises, onstage. After hurtling through a good 40 minutes of music, a white curtain fell before the band and the Daft Punk-inspired piano intro to the dreamlike “Love Like a Sunset” began. The slow buildup grew to a crescendo that found the curtain rising and left the band playing beneath lights that looked like sunlight as seen through blinds. It was a the strangest, and boldest, ten minutes of the whole set. 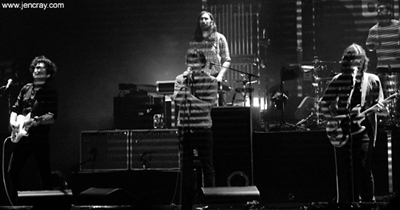 Jen Cray
Phoenix between the blinds

More songs off of the group’s four albums followed (yes, they really have been around that long!), including a stunning rendition of “Rome” that recalled The Cars, followed with the long and quirky “Funky Squaredance” off of their 2000 debut. 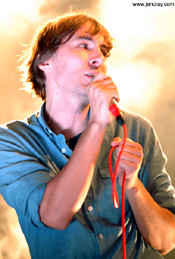 An extended encore that included a ballad sung in French (bold, again!) culminated with fan favorite “1901.” Mars, physically unable to remain onstage, found his away into the crowd once more, only this time, he ventured deep. Touring the edges of audience and dance floor with the help of an incredibly long microphone cord, by song’s end he was still sharing floor space with the rest of us.

October has been an unusually incredible month for tours gracing Central Florida stages, and we at Ink 19 have seen a lot of great shows in the past four weeks, but I’m willing to go on record and call Phoenix’s show one of the best!