Until The Light Takes Us

Until the Light Takes Us 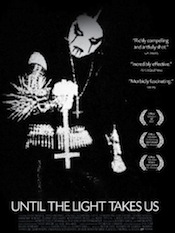 For the uninitiated, there is no more intimidating and incomprehensible sub-genre of heavy metal than Norwegian black metal. A tangle of corpse paint, murky and oft-extreme ideologies, and total atonal extremity, this is not for fans of a lil’ Guns N’ Roses or Lit. This is music for the committed outsider, exuding ugliness and an almost hypnotic melancholy. Contradictions are openly embraced; a love of tranquil nature often sits next to ugly nationalism or total sociopathy. More than punk or even gangsta rap, black metal revels in a 4-REALness that upped the ante to death, violence, and church burnings amongst its inner circle. The makers of this documentary are the first to treat this scene with total seriousness, living amongst the musicians and letting them tell their multifaceted versions of the truth.

The twin Janus faces of black metal are best represented by the dual innovators interviewed at length for this film: Fenriz from Darkthrone and Varg Viknernes (Count Grisnacht) from Burzum. Each of these bands had a major role in defining the black metal aesthetic as we now know it through classic albums like Transylvanian Hunger and Aske, and their shadows loom large over the scene to this day. Visually, they are a study in contrasts; Fenriz with long hair, denim ‘n’ leather attire, and an easy smile; Vikernes with neatly clipped hair, prison outfit (oh yeah, about that…), and official bearing. We see a typical day in the life of Fenriz as he goes record shopping, hits some bars, does a phone interview with an aspiring journalist, and stares bemusedly at a black metal photo exhibition. Vikernes’ sphere of movement is more circumscribed, as he is still in prison for the murder of Euronymous. So he sits ramrod straight and answers questions about his role in black metal at length, with ideological tangents aplenty. He treats his involvement in metal and his crimes as youthful folly, contrite but not fully repentant. It’s fascinating viewing.

Fallen innovators loom large in this film, and none larger than the deceased members of Mayhem, Euronymous, and the aptly named Dead. Dead, the gonzoid vocalist of Mayhem who set the tone for Black Metal lifestyle commitment by wearing clothes buried in the earth, who then killed himself, is portrayed as an impressionable puppet of the calculating businessman Euronymous. Indeed Euronymous, after happening upon Dead’s body, took a picture, which later ended up adorning the cover of a Mayhem live album. Euronymous was a mover and shaker without peer in early black metal, running a record label, record shop/social hub, guiding Mayhem, and ironically, playing on a Burzum record. Soon he would run headlong into the immovable object of Count Grisnacht, and only one would emerge alive. The youth and extremism that were such key components of this scene make it like hardcore on steroids.

Elsewhere, Demonaz and Abbath from Immortal, members of Enslaved and Ulver, as well as Hellhammer from Mayhem sit down for extended interviews. And Frost from Satyricon is another key player in the film. Traveling to Milan, he delivers a riveting solo non-musical performance as part of an art exhibition, breathing fire, destroying artwork, and finally appearing to slit his own throat. The directors do spend a little too much time lingering on the black metal-inspired visual art of Bjarne Melgaard, which is only a fraction above doodles on the back of a high school notebook, and it’s time that would be better spent on any one of many bands. I feel I should also highlight a truly stellar extra that makes the price of the deluxe two-disc edition completely worthwhile: Fenriz, in a classroom, giving an extemporaneous 45-minute lecture on the history of black metal, complete with diagrams! Priceless!

Until The Light Takes Us: http://www.blackmetalmovie.com