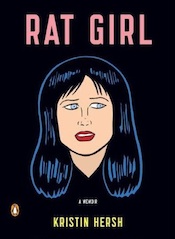 Kristin Hersh has a book! It’s called Rat Girl! The front lady of Throwing Muses and 50 Foot Wave talks about her life right as she was exploding, in the good ways and the bad. Her informal, charming tone makes this piece a relaxed read, as if your best friend was in this really great band and she was taking you everywhere she went – to crappy shows in her shitty car, the recording studio, and to the doctor’s office.

The book is set up with four parts encompassing an entire year’s worth of awesomeness, beginning spring 1985 and concluding in spring of the following year. Each “chapter” is broken up with memories of Hersh’s childhood set in a typewriter font, while some of the entries are further broken up by lyrics from her songs, also in a typewriter font, accented with a small zodiac symbol for Pisces. This helps to break up the swirling, pacing, labored, and frenzied stories, thoughts, dreams, and illusions of Hersh’s mind, so the visual pauses are much appreciated. I can imagine someone thinking, “How do we break this up so we don’t overwhelm the shit out of people?”

It’s this constant mania for a good portion of the book that pulls the reader through an astral plane of spiritual snakes and lizards, colors, racing thoughts, and stories from the past all flopping around each other like wet jeans in a dryer. The vibrancy of her descriptions and the pulse of her thoughts thumping off the page invite the reader to crawl inside her mindscapes for a while, but keep your eyes open and watch out. It’s this mania, she writes, that kept her from sleeping, kept her from feeling winter’s chill, and kept her going and going until her veins screamed for relief.

After being diagnosed with bipolar disorder and put on a stiff medication regiment, Hersh found out she was pregnant. She speaks rationally about the pregnancy, her shrieking fear and flaming hope for the baby, and also of her worries about the band. But since this is non-fiction and there were about 150 pages left, it’s obvious that Hersh didn’t dismantle Throwing Muses. The band continued to play, continued to write and rehearse, even recording an album, and continues into the present day.

I’ll stop ruining it for you. Rat Girl was such a pleasure to read. You’d be a mouth-breathing moron to not pick this up.