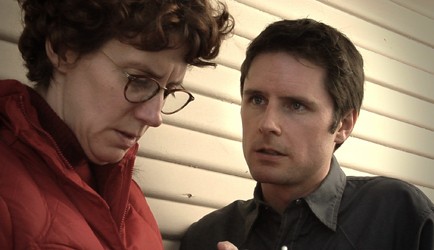 If your family was Eastern Europe, this is what Yugoslavia must have felt like. Holidays are never happy in Fanny’s (Pixley) family. Rather than a pleasant matriarch full of hugs and good wishes, she can only return to her foul-mouthed mother Edie. Fifteen minutes early for dinner? Stand outside. After all, Christmas must be perfect, and any deviations from plans will destroy it. Edie openly despises Fanny – she’s less than perfect and obsessive / compulsive to the point of barely living on her own, and not at all like her perfect brother Danny or her equally foul-mouthed sister Annie. Except for Danny, Edie berates everyone, including her mild and doughy husband Ronnie (George Killingsworth), who pines for those balmy days in that North Vietnamese POW camp. Edie would be banned by the Geneva Convention, and even the Taliban would hesitate to deploy her. With a dropped tuna wiggle and the Seagram’s running low, Edie escalates to Defcon 2: everything must be just so, and any and all deviations will be met with shock and awe. It’s Christmas, dammit!

Brown’s storytelling is intimate yet brutal. We are all focused on our own local problems, and the ones in this movie are really no worse than most: job loss, inability to finance a dream wedding, getting caught embezzling, or just the loss of all your war mementos in the course of cleaning the garage. Where this film makes you squeal is how it crescendos – there’s a tsunami of emotions and a fatal outcome just behind the decal of Edie’s Holiday cheer. Shocking as Brown’s film is, you feel sympathy for the fallen – they can’t possibly be worse after the credits than when dinner was on the table.

This film plays at the 2011 Florida Film Festival: http://www.floridafilmfestival.com • http://www.fannyannieanddanny.com