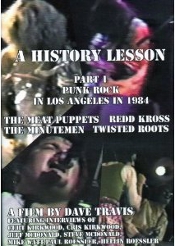 It’s strange to consider that throughout the history of rock and roll, hundreds of well-known bands or even entire scenes were sparsely documented, simply because the prospect of lugging a suitcase-sized camcorder to a rock show seemed too much trouble. And really, who would want to be recording a concert when you could be experiencing it?

Luckily, throughout the ages small bands of people decided to act as archivists, feeling they had a responsibility to capture bands in their prime to share with the world decades later.

Dave Travis was one of those people who decided to record hundreds of hours of Los Angeles punk shows from 1984 to 1997. Not sure how many of these tapes will eventually make it out, but the first taste from his vaults, History Lesson Part 1: Punk Rock in Los Angeles 1984 is a nice look back at a rarely-viewed part of rock history.

This first installment features vintage performances by Meat Puppets, Minutemen, Twisted Roots, and Redd Kross interspersed with interviews that seem to have been shot in the ’90s. Tape quality is about as good as you could hope for, feeling like a low budget cable access show, and the few times the editor decides to get creative with the film with double images and fractals really take away from the performances, but luckily these are only unleashed twice.

The interviews are interesting, Mike Watt talks about the Minutemen arguing on tour about which English king was excommunicated, having to find a library and pull over to solve their beef, and one of the Meat Puppets talks about recording their first album in three days straight on acid.

Bands are shown doing complete songs, a nice touch. Old-timers will find their own favorites; for me, seeing the Minutemen performing songs that would, just a month later, be captured on Double Nickels on the Dime is worth whatever the cover price is asking. The Meat Puppets’ blend of psychedelic punk is a lot faster and screamier than you probably remember; funny, because in the interviews they talk about how they weren’t accepted by the more doctrinaire punkers at the time. Redd Kross shows how all sorts of bands – Didjits, Supersuckers, Turbonegro, just about everyone combining punk with the sillier excesses of rock – owes them tribute. And one of the band members has the Paul Stanley strut down perfect.

The next time you get annoyed because the entire first few rows of a concert are taken up by chuckleheads pointing cameras at the band instead of actually rocking, just remember in 30 years you’ll be glad they were there to document this stuff.