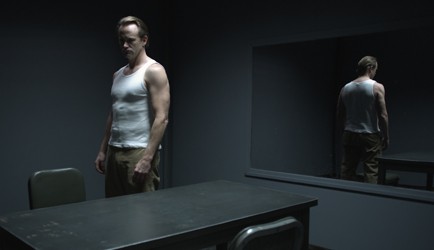 I’m pretty open minded about what people do in private, but Gerry and Joan (Lee Tergesen and Enid Graham) are a bit beyond what might be normal for even the oddest oddball sexual activity. Here’s how they start off: they meet a young couple (Tate Ellington and Emily Meade) on their honeymoon, seduce them into a foursome, and then… they don’t. Without giving away the core of this extremely odd journey, Gerry and Joan are confidence tricksters, but they don’t take money. They take self-respect.

Along the way they meet the sorts of people we all cross in our daily lives. Besides our honeymooners, there’s Portia, the Anglican priest from the Congo with her elderly white congregation and a fear of deportation over her head, a small-town police chief (Adam Lefever) who states “I’ve had people confess to their own suicides,” and an elderly man who inherited a room full of diaries and has made them his life since his memory died. After each “game,” Gerry and Joan engage in some rough play, and when it leads to bloodshed you think the game is up. Ha ha, the joke’s on you, there’s an audience sucker punch waiting just as the credits roll. If you’re tired of formula thrillers and predictable romances, Silver Tongues will open your eyes to how sick some of us can become, while still blending into society.

This film plays at the 2011 Florida Film Festival: http://www.floridafilmfestival.com • http://twitter.com/Silver\_Tongues