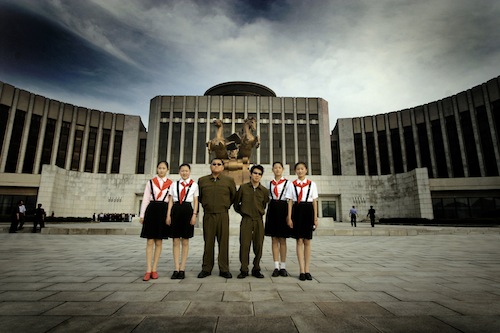 What abuse we prevent from our elected officials relies on comedians more than the ballot box. No matter what sleazeball you vote for, stated policies mean nothing without The Daily Show to enforce some sense of reality on Washington. That’s why the most brutal dictatorships hate humor, and the Democratic People’s Republic of Korea might be the most brutal of them all. Into this last remaining communist fantasy land, a pair of Korean/Danish comedians wrangle visas and drop into Pyongyang for a little cultural exchange. Simon Jul Jørgensen is the large sumo-looking guy, and Jacob Nossell the spastic (his word, not mine). Their manager, tour guide, and agent provocateur is Mads Brügger, who looks like Hunter S. Thompson and has it in for the North Koreans. Since the North Koreans don’t really grok Danish and have no clue as to what Jacob says, he’s the only one who can speak freely. Every night, their tapes and diaries are examined by the North Korean Intelligence for any sign of disrespect to the Beloved Leader. And fortunatlry for all of us, they are too blind to se it right infront of their faces.

The heart of the North Koreans’ problem is that what they consider disrespect and what we would are worlds apart. Laughter is largely forbidden (serious, I’m not spinning hyperbole for a change) and even fart jokes do not crack a smile. The populace is in constant fear of death, torture, and starvation, and the trio is never left alone, not for a minute. Mrs. Pak is their official interpreter and adopts Jacob, smothering him with icky love. As he says in English subtitles: “This is psycho creepy.” Indeed, the whole place is a Potemkin village – Broad boulevards are lined with tall apartments, but the streets are bare of humans. Few lights appear after dark, and the only after-hours entertainment is smoking and drinking. This isn’t a country, it’s a stage set, and all the actors are playing somewhere else.

Eventually the Danish comedy act goes on stage, rewritten by the head of the Korean National Theater and packed with mandatory propaganda. The comedians join the parade for “Down with the US Day,” a major national holiday, but when they appear on television, Brügger gets nervous. Are they able to poke fun of the DPRK, or were they just co-opted for internal propaganda purposes? This film has about as much footage of this isolated country as you’re likely to see, and projects a sense of foreboding and claustrophobia. One day, hopefully soon, this tottering regime will collapse, and the North Koreans will see the outside world. Just as the East Germans thought a late model Mercedes Benz was a spaceship from the future, the poor lovers of their Beloved Leader are in for a heck of a surprise when they find out what Japan and China and the rest of the 21st century looks like. This is an uncomfortable film, and more than a few people walked out on it at th showing I caught. People here whine about suppression, but they have never dealt with the real pros. Now, get out there and tell a few Obama jokes.

This film was shown at the 2011 Florida Film Festival: http://www.floridafilmfestival.com • Zentropa: http://www.zentropa.dk