Don’t hate us because we’re beautiful.

Mad Men-era James Bond, classic sci-fi and great drama – hardly the components of your average-fare superhero movie. However, X-Men: First Class combines all of these elements – and more – to qualify as much more than “average fare,” setting a high bar for this summer’s big-screen entertainment.

Though the film takes some creative liberties in chronicling the X-Men’s origins, it doesn’t qualify as a re-boot of the franchise, which faltered a bit in its last outing. One might call the period-piece First Class as a needed breath of fresh air. With a great script and surprisingly solid acting, the well-cast thriller proves to be a deftly and quickly paced chronicle of the early years of Charles Xavier/Professor X and his best friend and future enemy, Eric Lensherr/Magneto. 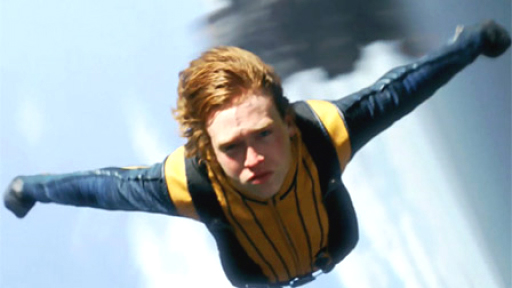 Yeah, flying’s cool. Except for the bugs in your teeth.

The prequel’s prelude is set in WWII, where privileged young Xavier, a telepath seemingly left to his own devices in a huge manor, befriends an even younger mutant, Raven. Meanwhile, Lensherr, a Polish Jew, is sent with his parents to the camps. There, a Mengele-type scientist, Sebastian Shaw (Kevin Bacon), can’t help but notice when the tormented lad starts exerting control over metal objects while under extreme duress.

Flash forward to 1962, and post-grad student Xavier (James McAvoy), with a full head of hair and quite mobile, is hardly the reserved English gentleman of later years. He’s got an appetite for women and beer, but his real thirst is for discovering the other mutants he knows have to exist. Keeping him honest in all endeavors is best pal Raven (Jennifer Lawrence), who’s been at his side since childhood. Engaged in other, darker pursuits is Lensherr (Michael Fassbender), who somehow survived Shaw and the camps. Now a one-mutant Mossad hit squad of sorts, the future Magneto chases his former Nazi tormentors around the globe, dispatching them in spectacular form. 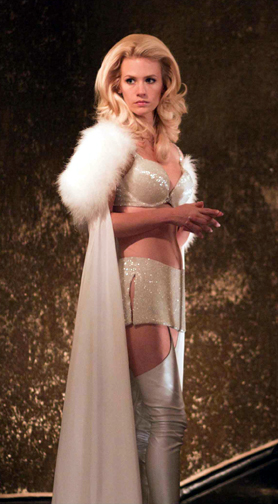 A third component emerges in the form of CIA operative Moira MacTaggert (Rose Byrne). While undercover in Las Vegas’ Hellfire Club (an underworld version of the Playboy retreat), she stumbles across icy super-mutant Emma Frost (January Jones) and her boss… Sebastian Shaw. In great 007 fashion, it’s discovered that Shaw has a plan to co-opt the Cold War to realize a doomsday scenario of his own. Xavier, Lensherr, and MacTaggert join forces under the supervision of the CIA; to counter Shaw’s mutant henchpersons, Xavier and Lensherr recruit a mutant team of their own – a young, untrained X-Men.

As most members of the comic book’s original X-Men have already been depicted as being relatively young in the Marvel film universe of today, some peripheral, even obscure heroes and villains were sacrificed to the mists of time. Chief among these are Sean Cassidy/Banshee (Caleb Landry Jones) and Alex Summers/Havok (Lucas Till), who provide much of the film’s action. Some creative licenses are more inexplicable. While lovely Ms. Byrne turns in another perfectly balanced performance, her MacTaggert is not the Irishwoman of comic lore. Likewise, Jones does not have Banshee’s famously thick Scottish accent. 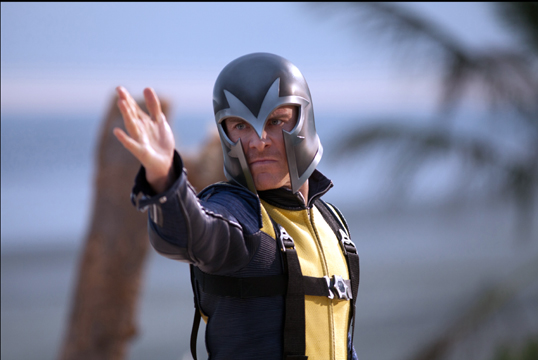 Does this helmet make my cranium look fat?

Though diehard fans will doubtlessly raise eyebrows at these, and several other re-interpretations, the bottom line is that they work. It all works, beautifully. From the classic costumes and ingenious cameo appearances to early versions of Cerebro, and the group’s modified Blackbird jet, First Class, for all its departures, is astonishingly true to the look, feel, and spirit of the early comics. Hank McCoy/Beast is the best example of this success. While some might momentarily object to his physical characteristics, actor Nicholas Hoult brilliantly conveys the young, awkward scientist’s essence. Additionally, the fledgling Beast’s possibly budding romance with Raven – now dubbed Mystique – proves to be First Class’ most charming aspect.

To its credit, the film has a not-so-subtle political bite to match the simmering tensions of the story’s era – and of this age, as well. Not surprisingly, government officials and military brass are portrayed as narrow-minded, fearful reactionaries susceptible to manipulation. More interestingly, as Xavier’s moral and philosophical differences begin to disastrously emerge, it’s easy to understand how and why the comic book was created in the midst of the Civil Rights Movement, as an allegorical fantasy. Additionally, the oft-revisited subplot of the young outcasts’ inner conflicts regarding self-image and identity, a timeless theme, might ring particularly close to home for the gay, lesbian, and transgender communities. 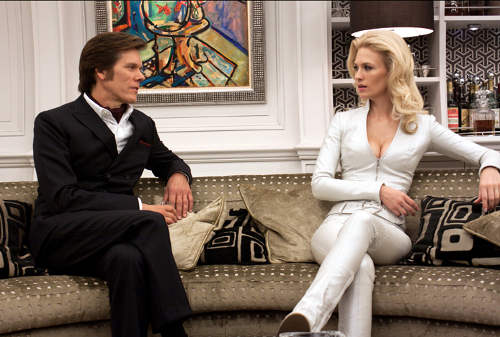 Allow me to demonstrate this couch’s features.

A lot of themes, a lot of characters, a lot of action. Yet it’s all surprisingly easy to digest and enjoy, for director/co-writer Matthew Vaughn demonstrates a knack for knowing when to montage and snapshot, and when to slow the pace and explore. First Class is first-rate film first. superhero flick second. This feat allows an X-Men fan to suspend consternation about liberties taken, as their dates, partners and buddies suspend their disbelief of the notion of flying mutants. Despite possibly stiff summer competition, this movie is well worth two viewings.