For a living symbol of our “can-do” spirit, Captain America has been consistently maligned in film since his comic debuted in 1941. 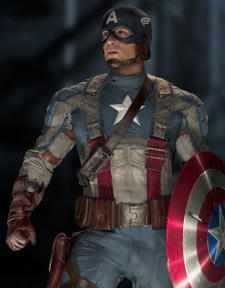 Captain America: The First Avenger is not as awful as the infamous pair of updated-for-the-‘70s TV movies. The 1991 Cap film – so low-budget and weird it didn’t make its way to American theaters – is a much poorer representation. The by-the-numbers 1940s serials… actually, this new Captain America film, set almost entirely during WWII, resembles those efforts more than any. However, viewers had limited expectations of the stereotypical cliffhangers.

To its credit, The First Avenger tinkers very little with the basics behind this origin-story. What few heresies are committed tend to work surprisingly well. Most notable is a major revision made after once-frail recruit Steve Rogers (Chris Evans, last seen as the Human Torch in the Fantastic Four films) captures a saboteur – moments after becoming a more-than-perfect physical specimen in a military experiment. Though he’s just jumped an eight-foot fence and thrown a man ten feet, Rogers’ potential is quickly dismissed by project manager Colonel Chester Phillips (Tommy Lee Jones). The aspiring ass-kicker is then offered two choices: he can become a lab rat for further study, or join a war-bond tour as a costumed character, “Captain America.” Rogers chooses the latter, and winds up starring in the aforementioned movie serials, and in his own comic book (kids are seen buying up reproductions of the actual Captain America #1 from a newsstand). Rogers only gets to Italy by being a chorus-girl flunky in a USO production.

This funny, self-lampooning critique of political hijinks, propaganda and suspension of logic during wartime – seemingly grabbed from a Watchmen outtake – works brilliantly. Ultimately, its brilliance and originality stand alone, however, making the rest of the film seem like it was written and directed by others. 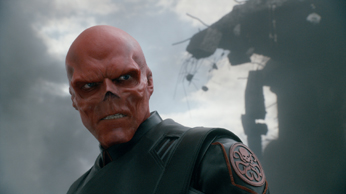 The First Avenger manages to cheat Captain America fans not by resembling a cheap serial or even a comic book. The first Fantastic Four flick was a panel-for-panel recreation of a ’60s comic, and was much more enjoyable. Instead, Captain America shortchanges the viewer by being ordinary, with a rote script that is almost interchangeable with of most of today’s action movies. Admittedly, the classic stories’ protagonist’s patently patriotic demeanor has always made Superman’s personality seem animated and multi-faceted. Captain America, however, cannot fly, and lacks overwhelming strength, spider-sense or a magic hammer. Frequently outmatched by powerful supervillians, Captain America wins by out-fighting and outsmarting his opponents; an underdog in red, white and blue whose occasional, wooden corniness we forgive because he’s such a never-quit badass.

Yet Steve Rogers – apart from early, pre-transformation moments – never seems to be in danger in The First Avenger; if anything, he’s too confident and “safe” as a novice, untrained Nazi-fighter. Heck, the obligatory “what am I capable of?” new-superhero montage is reduced to one good, hope-prompting scene. This icon should have been at the center of a thrilling production; instead, it’s as if Cap was dropped into a parallel storyline of that superficial, chest-thumping epic, Pearl Harbor. Pearl Harbor, however, at least had some drama, some tension. A superhero film without a hero to wholeheartedly root for? A comic book adaptation without a sense of wonder, bereft of thrills? Marvel has somehow produced one.

Marvel has also made another superhero film without a terrifying supervillian. The Red Skull (Hugo Weaving) is mean enough as the rogue leader of a Nazi splinter group, Hydra. However, Cap’s number-one arch-enemy, in his quest for true world domination, spends a lot of time killing Nazis – not necessarily a bad thing. Yes, America is next on the hit list, but perhaps Cap and crew should have let the Red Skull finish his immediate tasks before tackling him. 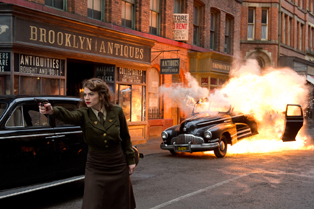 Yes, Captain America has a crew, and it’s not The Invaders (which would have blown fans away). Besides costume-free sidekick Bucky Barnes (Sebastian Stan), America’s hero enlists the aid of – after coming to the aid of – the legendary, too-cool Howling Commandos. The unit is led by bowler-wearing “Dum Dum” Dugan (Neal McDonough), with Sgt. Nick Fury in absentia. Who are the Howling Commandos? This movie won’t tell you, or even mention the name. The filmmakers obviously assumed viewers would be Marvel-hip enough to know them by sight, making introductions or character development superfluous.

There may be a lack of development, but there are indeed characters to be found in Captain America, nonetheless. Tommy Lee Jones, obviously hired to play Tommy Lee Jones, chews scenery like nobody’s business with great one-liners. But his skepticism of young Steve Rogers seems to justifiably extend to the movie he’s in – you half-expect Jones’ Col. Phillips to wonder aloud, “What am I doing here?” Iron Man’s Howard Hughes-like father, Howard Stark (Dominic Cooper), shows just enough promise to have been given more screen time. The requisite love interest, Agent Peggy Carter(Hayley Atwell), has a hint of chemistry with Rogers, and another scene or two between them would have prevented the intended emotional payoff from falling short.

Director Joe Johnston, who helmed the great 1940s homage, The Rocketeer, brings some of that glorious, colorful period imagery to life in the opening chapters. He then falls asleep at the wheel when it comes to battle sequences or creating any atmosphere of suspense or excitement. The “Real 3D” conversion succeeds in augmenting Agent Carter’s admirable dimensions, but little else. The action sequences are frequently blurry; the 3-D often makes the backgrounds look like dark, painted sets. One suspects that in “Lesser D,” much of the film would appear cheap. To top it off, dependable composer Alan Sylvestri phones in a distracting, over-the-top score that’s supposed to be stirring – but almost draws chuckles, instead. 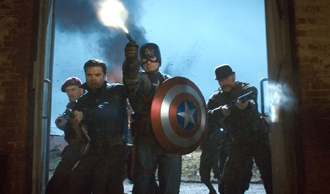 Additionally, at this screening the expected Avengers tie-in easter egg at the end of the credits never materialized, which led to loud boos and catcalls among at least one screening audience.

Comic book fans and novices don’t expect every superhero film to be a Christopher Nolan or Bryan Singer masterpiece. However, with all the guns in their arsenal, with the recent entertainment triumphs of Iron Man and The X-Men, this is the best Marvel could do with one of its biggest properties for its 70th anniversary? Really? Many years ago Captain America: The First Avenger would have excited kids who deflected imaginary bullets (or actual rocks) with garbage-can-lid shields in backyard re-enactments… but for the adults they became (and for their children and grandchildren), it’s merely a tease of what could have been.