Neil Young: Here We Are in the Years

Neil Young: Here We Are in the Years 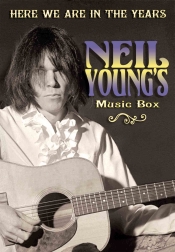 It’s hard to come up with rockers who have successfully spanned as many generations and genres as Neil Young. Young came out of the plains of Canada and conquered or at least influenced nearly every genre from folk to punk to grunge. In this wide ranging documentary, we touch on everyone from Buddy Holly to Bob Dylan to Johnny Rotten and even Kurt Cobain as we explore the life and times of Mr. Young. This documentary is “uncooperative,” that is, Mr. Young didn’t authorize or contribute to it, but there’s nothing to be ashamed of here. While the narration isn’t exactly fawning, there’s no dirt to dish, and what setbacks Young’s career suffered appear more as calculated steps back from the edge of the rock ‘n’ roll circus as anything disastrous. We begin with his youthful bands, follow him into the folk scene and the political turmoil of the ’60s and on to experimental if not always successful projects of the ’90s and ’00s. After his smash hit Harvest, Young drew back from the public eye until punk hit the scene. Unlike his contemporaries, he saw punk as the same expression of anger and ennui that had produced the musical explosions of the ’50s and ’60s. Prominently referencing both Elvis Presley and Johnny Rotten, he produced the landmark project Rust Never Sleeps. Subsequently he worked closely with the grunge bands, again approving of and influencing the movement without ever becoming part of it.

Without Young, the narration comes from a team of rock journalists like Richie Unterberger (Mojo, Collector’s Choice), Ned Raggett (Allmusic, Seattle Weekly) and Anthony DeCurtis (Rolling Stone). These are guys who know a thing or two about the music business, and their opinions on Young are worth hearing. Along with them there are classic clips of bands that influenced Young or took from him. Young’s concert footage comes from television performances and films, including bits from the concert film for Rust. All of this takes about two hours and while it might sound like there’s some padding here, it’s interesting padding and this documentary flies along. It’s perfectly safe to drop in and out of chapters – skip the era you don’t like, repeat the ones you do. Great for fans, entertaining and informative for those who aren’t, this is a well researched and well assembled documentary, completely commercial-free.