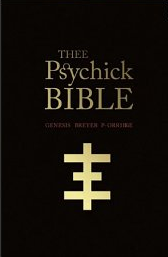 As Philip Larkin once said, “This be the verse.” Genesis Breyer P-Orridge has been many things in his/her life. Performance artist/provocateur with the COUM Transmissions group. Inventor of industrial and noise music with Throbbing Gristle. Unofficial head of the (non) cult Temple ov Psychick Youth and its pop music public face, Psychic TV. Add to that pioneering exploration in tattooing, body piercing, rave music, and, most recently, pandrogeny in his twinning experiments with Lady Jaye Breyer P-Orridge – a combination of surgery, fashion, and philosophy. This would be the makings of a full life by anyone’s measurement, but P-Orridge’s most abiding obsession is magick. Indeed, it is the one thread that links all of his seemingly disparate pursuits together. When I say magick (his spelling, not mine), I’m not talking about pull-a-rabbit-out-of-my-hat-oh-god-I’m-on-_America’s-Got-Talent_ magick. Nor am I talking abut Gob and his Alliance of Magicians on Arrested Development. I’m talking about a more insurrectionary application of magick as a means to circumvent societal control and live out all of your desires.

Thee Psychick Bible is a collection of all of the writings that P-Orridge did on behalf of Thee Temple ov Psychick Youth – a communal magickal order that he developed after TG splintered – defining goals, aims, and various magic rites (or sigils). And P-Orridge did a whole helluva lot of writing for TTOPY, including the now mythical Grey and Black Books, as well as a constant stream of manifestos and guides to ritual practice and circumventing control. Thee Psychick Bible, in compiling these tracts as well as various other essays, interviews, and visual ephemera comes out to a whopping 500+ pages, which puts P-Orridge on a par with his idol Aleister Crowley in terms of sheer volume of written work on magick use.

And despite all the hype and hoopla of P-Orridge’s colorful life – including basically being kicked out of England in 1992 on trumped-up charges of ritual abuse and moral decay – the reality is that P-Orridge’s writing stands on its own. His philosophies are heavily influenced by the aforementioned Crowley and Burroughs (indeed, P-Orridge and Burroughs exchanged mail art in the 1970s, and P-Orridge includes a fulsome essay on the impact Burroughs and Brion Gysin had on his work and life herein), so expect plenty about the virus properties of the word and the proper way to invoke sexual magick. However, and this is key, P-Orridge has an innate humanness/humanity to his outlook that both the patrician Crowley and Burroughs lack. Many of the tenets of TTOPY, like visualization and self-determination, have been appropriated ad nauseam by self-help gurus for decades now. P-Orridge repeatedly emphasizes that TTOPY is only for individual betterment, not groupthink, and it’s of no small irony that when Scotland Yard was smashing their way into his house and the media was trumpeting him as history’s worst monster, P-Orridge was emptying his savings by feeding beggars and lepers in Tibet.