with Mona, The Drowning Men

I blame it on the first real cool snap of the winter, but this mostly male crowd seemed united with opening act The Drowning Men by serious facial hair and plaid flannel shirts. I hadn’t been in The Beacham in ages, but it’s one of those 1920s movie palaces fallen on hard times and lucky to still be standing. The old seats are gone, the acoustics muddy and flat, but there are six, count ‘em, six bars. There’s even a secret tunnel over to The Social if you want a decent beer instead of that NASCAR flavored stuff. Clearly, this is a Drinking Man’s concert hall. 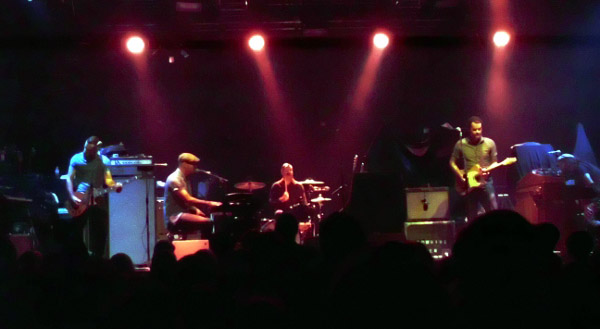 The hair and shirts are calculated and intentional “stevedore chic” for this subgenre of the independent freethinker. The Drowning Men look like a troupe of lumberjacks who learned their instruments while topping pines in Oregon; they stand stock still on stage and play a sort of shoe gazing metal. Lyrics are lost in the echoey gloom, and I had trouble finding an element of their sound kit with which to unite. Their compositions picked a little melody line, played with it until they lost interest, then picked up a new one. Their set proceeded along these lines until something weird happened – guys in sombreros appeared and helped the drummer and added their own instruments. When I recognized Anna Bulbrick from The Airborne Toxic Event, I thought, “The headliner is kicking the opener offstage!” But later they explained this was Drowning Men’s last night on tour, and it was all a friendly jam session. It was also better than Drowning Men’s own stuff.

Next up was a rockabilly-influenced Mona. They hail from Nashville and have Bible-thumping pew cred, front man/guitarist Nick Brown and drummer Vince Gard did their Pentecostal charismatic time, and even bass player Zach Lindsey made Southern Baptist. These guys must be real demons on the tour bus. Brown has the look down solid – white t-shirt, little pile of rockabilly hair heaped up on top, and a strutting guitar sound. He’s clearly the star; the rest of the band hangs back in the gloom and lets him wail. It wasn’t clear why, but in the band’s bio page he admits to firing the last guitarist by punching him out. There may be nothing like righteous wrath, but I found the band’s songs drifted around the wheel of genres, sometimes opening rock and ending rockabilly, sometimes starting with a dance line and ending with a sermon, and never sticking to consistent style through a whole tune. I was looking for a memorable bouncy tune, but they felt rather generic and I hope they don’t punch me out for saying so. 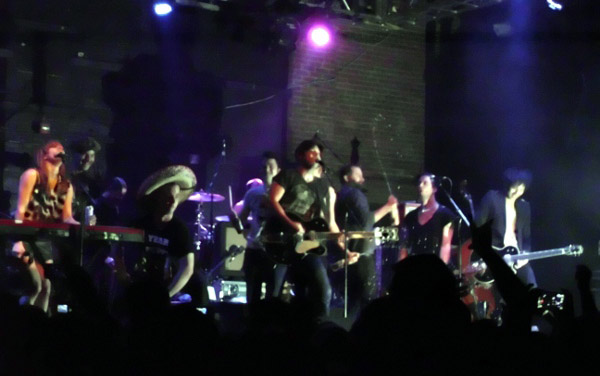 As Mona packed up, the stage lights came up for The Airborne Toxic Event’s stage crew to set up. The light onstage was brilliant while they pulled cables and uncovered a giant drum kit, but once the music started, they went to dark on dark and it was hard to get a good look, never mind a usable photograph. While all the right songs were there and Mikel Jollett held our attention as he rolled back and forth on the stage, you had to know the songs in detail to get the hum along. At one point he descended into the audience, crawled over the forward starboard auxiliary bar and up the woodwork to the VIP Only staircase. We all love when the star descends to our level and takes some risk in doing so, the punks stage dive but the indie rockers sort of stand around singing, and after a while we accept them as one of us, but with a greater sense of social responsibility.

Soon the concert began to wind down, and the guys from The Drowning Men and Mona reappeared, leading to one giant stage filled with love and music and hairy men. The Toxics retreated back stage as we stomped and chanted and they soon came back, played another number, and then graciously came back for a second encore. I wish to hell I could tell you what they sang, but whatever it was, it was well received. The muddy sound finally pushed me to the edge, and I snuck out ahead of the masses. It was fun, the crowd was glowing with love, and the show was steeped in mystery. But questions remain and should they return I’ll be ready – I want to hear the lyrics.