Being Elmo: A Puppeteer’s Journey

Being Elmo: A Puppeteer’s Journey 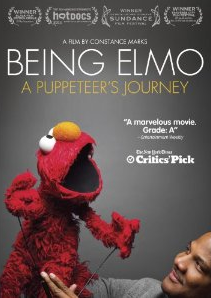 Well, this is an unusual documentary. Young Kevin Clash falls in love with the Sesame Street puppets at age ten and grows up to play one of the series’ best loved characters – Elmo. Clash grew up in the Chocolate Town section of Baltimore where his parents encouraged his odd love of felt even after he cut up dad’s trench coat for his first puppet. He didn’t get his butt whipped, but went on to work on the Channel 2 Caboose show hosted by Stu Kerr. Then it was a short Amtrak run up to NYC where he fell in with Kermit Love and Jim Henson. When one of Henson’s best puppeteers couldn’t figure out what to do with the Elmo puppet, Clash stepped in and turned Elmo from a young cave man into the essence of love. “Tickle me Elmo” came out a few years later, and Clash was so successful that his wife left him and his daughter begged him to spend a few years with her before she went off to college.

There’s no muck to rake here – it’s a classic Horatio Alger story of the American dream told with love and affection and a great behind-the-scenes look at puppetry and Sesame Street. There’s very unusual archival footage; who would have imagined filming a young unknown who happens to drop in on the man who built Big Bird and Mr. Snuffleupagus? Shy and self-effacing, Clash also worked with Captain Kangaroo, broke the puppet color barrier, and now is the creative director of the Sesame Street team. Besides learning a fun and heartwarming story, you’ll see how puppets are made and articulated, hear how meeting Elmo became the dying wish of many small children, and wonder “How did this film get a PG rating?” (Someone mentions the “D” word.) Narration comes from Whoopi Goldberg, but it seems Mr. Clash and his family spend more time talking about his influences than Goldberg. Personally, I would have preferred Miss Piggy to narrate, but it’s still a fun story. And how many people get to do exactly what they wanted to do when they were ten?