with Kool & The Gang

The last time Van Halen toured – supporting new material – with original frontman David Lee Roth, the year was 1984. It was the album of that same year (1984) that the legendary hard rock band was promoting – the very same album that would not only end up becoming one of their most commercially successful, but also the source of much of the setlist for their 2012 A Different Kind of Truth Tour. 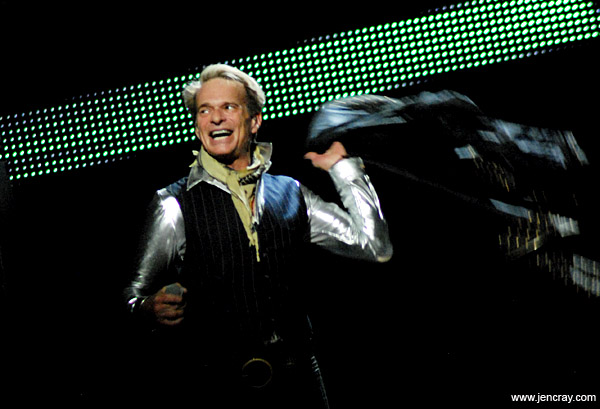 Sure, the band – with Roth – did a reunion tour five years ago, right after bassist Michael Anthony left the band, but this one is different because it feels more official. They’ve got a new album, the surprisingly true-to-form A Different Kind of Truth, and the four members (Roth, Eddie Van Halen, Alex Van Halen, and bassist Wolfgang Van Halen – Eddie’s 21-year-old son!) look and play like they actually want to be onstage with one another. It doesn’t feel like a cash cow reunion, it feels like a band that’s set aside its differences and decided to make music again. And the music for this tour is exclusively of the Roth years – not one smidgen of the Sammy Hagar days made the cut. 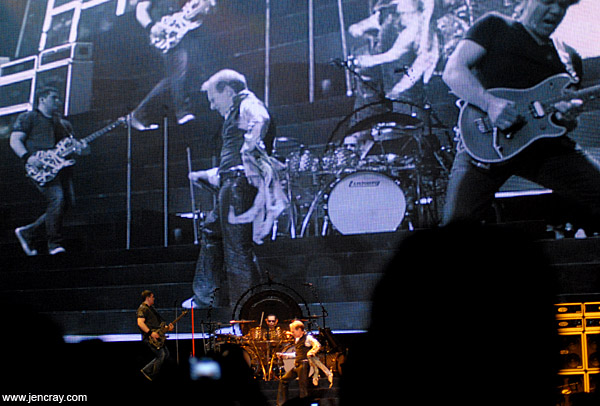 Orlando’s Amway Center was nearly sold-out, and, though the bulk of Van Halen’s fans are in their 40s these days, those fans were jumping up and down beside their chairs from the opening spotlit drum intro of “Unchained.” Even up into the rafters, seats were abandoned to make space for proper pogos and head banging. With the familiar Brown sound of Eddie Van Halen’s guitar filling even the bowels of the arena, with the flashy David Lee Roth throwing kicks and mugging like Mick Jagger, and with the die-hard fans pushing the boundaries of thread on their vintage, faded, gray, old concert shirts – you could have almost believed it was 1984 again. 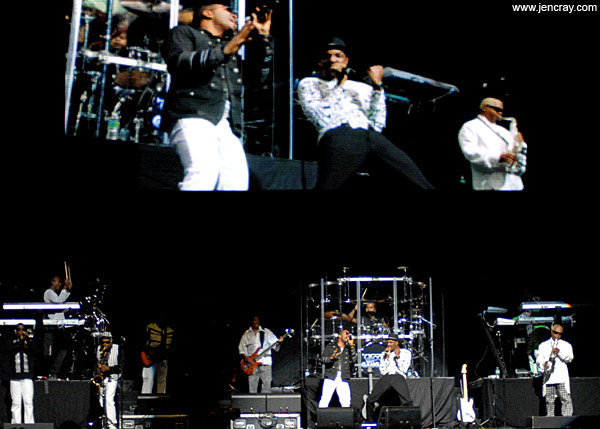 Even the opening band was a flashback. Freakin’ Kool & The Gang, man! What’s that, now?! “Celebration,” “Get Down On It,” “Jungle Boogie” – yes, that Kool & The Gang! Of the dozen members onstage, only a few of them are of the original 1964 lineup (including bassist Robert “Kool” Bell and saxophonist Ronald Bell), but they disco funked their way through a 45-minute set that, oddly, went over quite well before the roomful of rock fans. 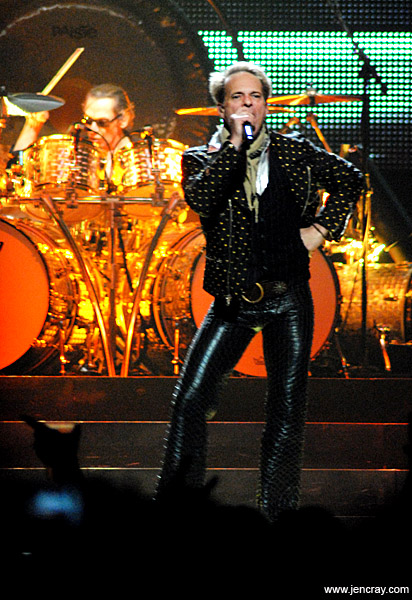 They enjoyed the boogie, but they reveled in the wash of rolling thunder of the main act, and they thanked their lucky stars to be on the receiving end of Diamond Dave’s cheeky banter. Even cheekier than usual, Roth yanked down one side of his skin-tight leather pants to blow up the tattoo of a gun on his ass cheek on the IMAX-size screen behind the band during “Tattoo.” When he wasn’t mooning the audience, he was showing off his limber physique with martial art-inspired moves, flashing his cheshire grin, and even laughing at himself when he forgot the words to “Chinatown.” And when the band dove into songs from decades past – “Everybody Wants Some,” “Hot For Teacher,” “Panama” – he, and the ever-smiling Eddie, looked as ecstatic as the audience. 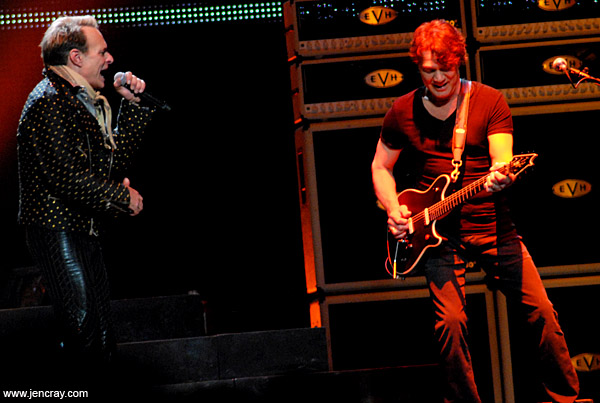 With no extra touring musicians used, or needed, the Hall of Famers shouldered the sound effortlessly. Ending with “Jump” (how could they not?!), Van Halen closed out a short-but-killer 21st Century demonstration of a band that doesn’t need any bells or whistles to blow your mind.

Gallery of live shots from this show: Van Halen.