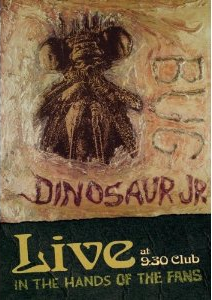 As if Dinosaur Jr. playing their classic album Bug in its entirety wasn’t enough for an interesting DVD, the fine folks at MVD went one further and had the whole thing shot by fans of the band. Can anyone tell the difference between fan shots and professionals? Would the amateurs bring a new spark to the project as opposed to professionals? Not sure, really, but the resulting DVD is well worth a visit.

Starting out with a brief explanation of the project as well as applicants’ YouTube entreaties to be chosen for it, we meet the winners, who are all enthusiastic and ready to get started. From there we go to the full concert at DC’s 9:30 Club. The band is in top form, although unless you have a personal screening room, there is no way to adequately convey the sheer noise and power that comes from Dinosaur Jr.’s live shows.

So is there a noticeable difference from the amateur filmers? Hard to say. There does seem to be a higher concentration of crowd shots, as if the photographers were trying to capture what their idols saw each night, or possibly showing the crowd, “Hey, I used to be where you are. Now look at me.” There are also several inventive shots, like some behind-the-drum-kit shots and nice overhead shots, as well as a focus on instruments and hands.

At the end of the Bug set, one of the fans/photographers gets to sing on the album-closer “Don’t.” While the rest of the songs are played close to the album versions, this one has a more classic rock feel with an almost mellow intro, rather than the throat shredding creepy vibe on the album. The fan handles himself well, though, and you can feel his excitement.

The extra features run almost as long as the concert and include a nice segment where the fans interview the band. They come off well, and it’s endearing to sense the excitement and nervousness some of them display as they actually speak to their favorite band. There’s also a Henry Rollins interview that took place on stage before the show, which is good, although marred by some whoooo-ing. Rollins also runs down the history of the 9:30 Club, which apparently is in a different location than the one where all the early DC hardcore shows took place.

The sound is good throughout, although nowhere near as ear-splitting as the real thing, and there’s an overall sense of earnestness from the fans that is appealing. A great band doing one of their best records in front of an appreciative crowd, filmed by real people. What more could anyone want?