Guns and Weed: The Road to Freedom

Guns and Weed: The Road To Freedom 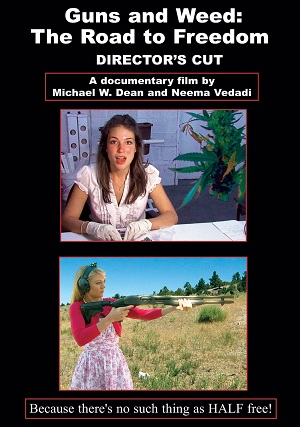 Here’s the short version of this film: you have the legal right to own very large guns and shoot them at tin cans in the desert, and you have the moral right to ingest whatever you want, especially medical marijuana. And there’s a corollary: A person with a gun is a citizen, and person without a gun is a peasant. Dopers and rednecks, Unite!

Sounding a bit like a libertarian talk radio show, this piece of agitprop doesn’t exactly build a case for its position so much as repeat it over and over again. Supporting arguments are ignored, and the viewpoints are about as balanced as a Michael Moore documentary. What makes this lecture bearable is it’s a very funny lecture. Mr. Vedadi doesn’t rap well, but the sight of a large South Asian man in a tight suit acting all Gansta is pretty funny. The gun shooting sequences show how badass the gun owners are, although it’s not clear how they would fare if confronted with equivalent fire power on a level field. The pot segments show gorgeous, carefully trimmed buds in a Colorado dispensary tended by very happy people, cool looking hydroponics, and angry sick citizens who were unable to get prescriptions. Skits with cheesy effects and sarcastic parody news reports pop up, and while this film never veers off its path, it bounces along like a Saturday Night Live skit that admits it lights up.

This is an ultra-low-budget project, but what funds were spent show what you can do these days with a cheap camcorder and an open-source editing suite. The people on screen are interesting and engaging, the effects are slightly cheesy but never annoying, and the message is strident yet unlikely to convince Obama (much less any Republican) to lighten up on the ganja patrol.