The evening with Hilary Hahn and Haushcka at the Neptune Theatre was an exposition of Modernist music befitting of the late spring season in Seattle. The season is a schizo-mix of grayish misty rain, which draws introspection, and the occasional bit of sun, revealing the Cascades in the distance and opening up celestial inspiration. Somewhere in-between gray and sun, the Neptune Theatre sits on the corner of a mostly desolate main street that seemed to be a pause of civilization between two university centers. By comparison, Silfra, the title of the recently released album by Hilary Hahn and Hauscka, refers to a rift in Iceland that divides two continents: North America and Eurasia. There is a crystallized beauty to this remote but cherished Icelandic dive spot where the water is purely clear. And it was in Iceland, and this evening in Seattle, that a world class, Grammy-award winning violinist and an avant-garde German pianist came together to explore a post-modern improvisation between violin and prepared piano that wafted between introspection and inspiration.

The pieces performed that evening were an atmospheric soundscape with a musical palate of tone colors mixed by Hauschka’s “prepared piano” customized for each performance. A technique used by 20th century Modernist composers like John Cage and Erik Satie, prepared piano involves the placement of certain objects in-between strings of a piano in order to achieve different percussive sounds and tonalities. From where I was sitting, it was difficult to see what items were placed in the piano strings, but for the curious, here are some common objects that Hauschka has used in the past: ping-pong balls, plastic packets of Tic-Tacs, individual jingle-bells, metal trinkets, and eBows more commonly used for guitar effects. From it arises a rhythm of thumps, thuds, and taps that almost sound like a small percussive ensemble.

Overlying this wonderful rhythm is Ms. Hahn’s wonderfully sustained melodic flights from her violin. Just seeing the mastery of technique in her violin playing is worth the price of the ticket alone. Her facial expressions are consistently stoic – uncharacteristic of many popular violinists whose furrowed brows and grimaces appear as if they’re about to jump out of their skin into the music. But don’t mistake stoicism for a lack of passion. Like the clean waters of Silfra, Ms. Hahn’s passion shines through the purity of her lines. 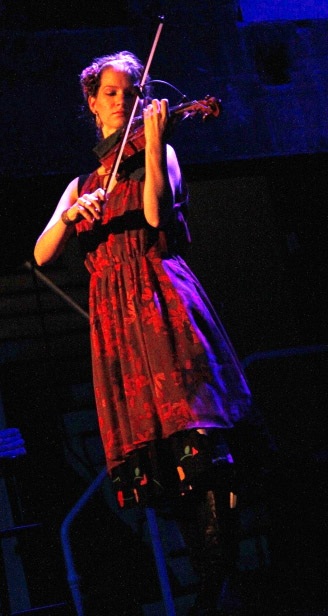 Because the essence of the work in Silfra is loose in structure and form, the best way to approach this performance is to just be carried away by the moment. The entire evening seemed to be a series of improvisational vignettes with thematic references to some of the tracks on Silfra – the syncopated quirkiness of “Bounce Bounce,” the emotive Eastern European passages of “Krakow,” and the cool ambience of “Stillness.” The duo clearly listened to each other to play off the buildups and fades, or as Ms. Hahn once called it, “blend and contrast.” This continued until, at one point, the piece just suddenly ended. If anything, this is true to the album; all of the tracks on Silfra were recorded on the first take where the layers of sound were created in real-time by the sound engineer and producer.

By the same token, translating the feel of Silfra to the stage can be a bit of a challenge for a musician who’s spent the majority of her musical career memorizing a composer’s work with a limited range of interpretation for that repertoire. To replicate some of the layers of sequences heard on Silfra, Ms. Hahn relied on effects foot pedals to create delay loops and sequencing. For the most part it worked, but there are times in this performance that Ms. Hahn is clearly trying to feel her way through improvisation in working when to start and stop those loops.

After the concert, both Ms. Hahn and Hauschka met with fans to answer any questions about the performance, sign autographs, and pose for pictures. It was during my couple of minutes meeting them afterwards that Ms. Hahn admitted to learning how to use the delay pedal only recently, and she’s still working it out. A work in progress is a refreshingly honest answer that only someone with confidence and a sincere approach to exploring new musical realms can give. Witnessing this honest moment of musical creation from two such talented artists makes this a concert well worth attending.