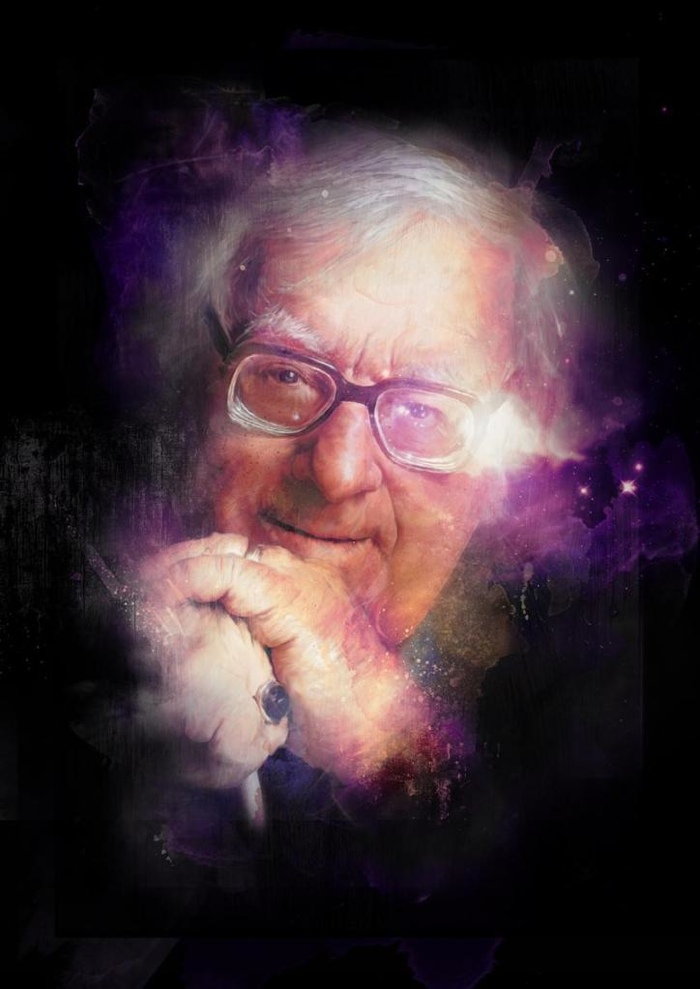 For me, writing an obituary for Ray Bradbury became an all-encompassing writer’s block and an almost impossible task. Part of me didn’t want to accept his passing, and the other part of me wanted to expound too much on what his writings and philosophy meant to me. How do you encapsulate in just a few short paragraphs just how special a man he was to millions of people from every corner of the Earth?

Inspired early on by horror films and comic books, Bradbury refused to leave these fantastic creatures on the pages of books and on theatre celluloid. Instead, with his own imagination fueled, he began to apply the unbelievable to ordinary day to day situations. Imagine a woman buried alive in the woods and a small child hearing the cries. Imagine a traveling carnival whose prizes for the unknowing are granted wishes of dire consequence. Imagine a world where books are burned – by the firemen themselves?

The way he looked at the ordinary and revealed the extraordinary is what I took away from Ray the most. Never again could I look at the world so simply. I now always question and imagine what could be, what if?

Bradbury’s curiosity for “what if?” combined with his wondrous imagination helped predict many items that are now day to day products, such as iPods and interactive television, and his belief in a town-like setting for a group of shops and theaters predated today’s modern shopping malls.

Wikipedia offers lists of Ray Bradbury’s accomplishments and awards, but if you don’t already know all about them, reading the list now won’t leave that much of an impression on you, other than the expected awe at such a prolific career in which more than eight million copies of his books have been sold in 36 languages.

What will have a profound effect on you is reading a novel of his, such as Dandelion Wine, Something Wicked This Way Comes, The Martian Chronicles, Fahrenheit 451, or any one of the 600 short stories that he published.

I speak from experience. Bradbury’s classic, Dandelion Wine, was a reading assignment for me in 7th grade, and while my other classmates exhaled their complaints about how potentially boring a book about a boy’s summer could be, I jumped in head first and breathed in a world that very much mirrored my own sentiments regarding summers, families, and just growing up in general, so much so that I felt a kindred, almost spiritual pull towards his words and worlds.

Now it was as if a huge sum in arithmetic were finally drawing to an end. She had stuffed turkeys, chickens, squabs, gentlemen and boys. She had washed ceilings, walls, invalids and children. She had laid linoleum, repaired bicycles, wound clocks, stoked furnaces, swabbed iodine on ten thousand grievous wounds. Her hands had flown all around and down, gentling this, holding that, throwing baseballs, swinging bright croquet mallets, seeding black earth or fixings covers over dumplings, ragouts and children wildly strewn by slumber. She had pulled down shades, pinched out candles, turned switches, and- grown old. Looking back on thirty billions of things started, carried, finished and done, it all summed up, totaled out, the last decimal was placed, the final zero swung slowly into line a silent hour before reaching for the eraser.

Each time I read a different story, whether in short or long form, I was equally charmed and stimulated by his use of the most creative adjectives and situational empathy for the humanity he brought to his subjects and stories. He was quoted as saying “no one ever died that had a family,” and that sentiment came from his belief that customs and traditions passed down from one generation to the next and carried on kept not only the spirit alive of a loved one but kept the loved one in the here and the now.

Like all boys, they never walked anywhere, but named a goal and lit for it, scissors and elbows. Nobody won. Nobody wanted to win. It was in their friendship they just wanted to run forever, shadow and shadow. Their hands slapped library door handles together, their chests broke track tapes together, their tennis shoes beat parallel pony tracks over lawns, trimmed bushes, squirreled trees, no one losing, both winning, thus saving their friendship for other times of loss.

I was so deeply moved by his observations and writings that I corresponded with him a few times over the years. The first time was actually a funny “out of the depths of despair” scenario as I was actually put on hold for a call-in on the Larry King show, waiting to speak with Ray. The screener came on the line stating “you’re the next caller up” and to have my question ready. With my heart pounding from immense exhilaration, my reality was completely shattered by the caller before me, who was going on and on and on, asking a question whose inane irrelevance to Mr. Bradbury was only frustratingly equaled by the time it took to ask it.

With me watching King’s hold button flashing on my television I suddenly heard the screener come back on the line stating, “Sorry we’re out of time” and with that, the flashing button and my hopes were simultaneously extinguished. After I collected myself, I sat down and wrote Ray about what his work had meant to me and of the day’s frustrating events in trying to reach him on the Larry King show, along with the question I was going to ask him. A few weeks later I received back a personally typed, hand signed letter from Ray on his own personal stationary full of warm salutations and wit.

Years went by before we corresponded again, but I always kept my literary torch burning for Mr. Bradbury. Out of the blue, I came across a website that had done some audio reenactments of some of his more popular works. When I found a hand-drawn map that Ray had supplied as a “historic reference” to his beloved Green Town, Illinois (an imaginary town based on the actual town where he did grow up and where many of his more famous characters resided), I felt compelled to write him once more. 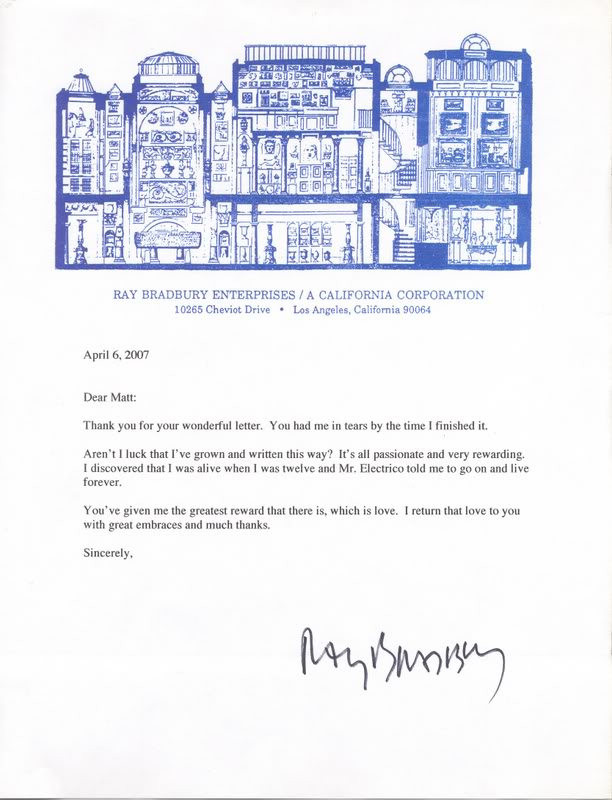 Once again Ray replied with a letter that this time caught me quite by surprise. He wrote that my words had brought him to tears, and with heartfelt gratitude and love, he wanted me to know this. You could imagine my emotions at the time reading this from a man, a writer, whose work had deeply affected the way I looked at everything.

Ray Bradbury’s immense popularity and fame had him rubbing elbows for decades with celebrities who were just as excited to meet him as he was meeting them. But it was always the reader – just folks like myself who expressed their thanks and love of his work – that he said brought him the most joy.

When Ray was twelve years old he met up with a carnival performer one summer who went by the name of Mr. Electrico, who would “knight” someone in the crowd each evening, transferring his electricity to that person. Mr. Electrico told the young Bradbury to “Live Forever!”

Bradbury decided then that writing was his way to achieve this immortality, but he couldn’t know then that in the future his work would deeply affect such industry legends as Steven Spielberg, John Houston, Stephen King and even Walt Disney, influencing and inspiring them to dream, and helping inspire some of their greatest efforts, reaching beyond generations and in turn assuring that Ray Bradbury would indeed… live forever.

You rarely see them these days, though in some countries, I hear, they are still made and filled with warm breath from a small straw fire hung beneath.

But in 1925 Illinois, we still had them, and one of the last memories I have of my grandfather is the last hour of a Fourth of July night forty-eight years ago when Grandpa and I walked out on the lawn and lit a small fire and filled the pear-shaped red-white-and-blue-striped paper balloon with hot air, and held the flickering bright-angel presence in our hands a final moment in front of a porch lined with uncles and aunts and cousins and mothers and fathers, and then, very softly, let the thing that was life and light and mystery go out of our fingers up on the summer air and away over the beginning-to-sleep houses, among the stars, as fragile, as wondrous, as vulnerable, as lovely as life itself.

I see my grandfather there looking up at that strange drifting light, thinking his own still thoughts. I see me, my eyes filled with tears, because it was all over, the night was done, I knew there would never be another night like this. No one said anything. We all just looked up at the sky and we breathed out and in and we all thought the same things, but nobody said. Someone finally had to say, though, didn’t they?

And that someone was me.

The wine still waits in the cellars below.

My beloved family still sits on the porch in the dark.

The fire balloon still drifts and burns in the night sky of an as yet unburied summer.

Because I say it is so.