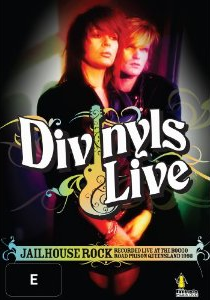 When you’re in the business of writing about rock and roll, you can never really leave the past behind. Take the Divinyls: they were a solid power pop band that got some real notoriety for the onanistic “I Touch Myself,” but never made the next step. This all went down in 1991, when the business was dominated by CD sales, MTV airplay, and a technological innocence that meant you had to shoplift if you wanted music without paying for it. This 1993 concert is great time capsule; shot on old school low-def tape, ripped and up-sampled, it has the sort of noise and artifacts you’d get with one of those retro photo apps on your phone. The video quality isn’t great, but it’s not bad, and no worse than what you would see on a decent Motorola console in the day.

This film was shot at a prison in Australia, but that’s not terribly obvious from watching the tape as the cameras stay on the band and what audience shots we see show what looks like any male-dominated, working-class crowd. Lead singer Christina Amphlett looks a bit zaftig as she taunts the crowd in a short white coat and black tights, one foot firmly on the floor and another on top of a largish monitor speaker. Her voice sounds significantly different than the classic video; it’s less husky and maybe half an octave higher. She looks a bit rough in some shots; maybe it’s the lack of a stylist, or maybe just typical bad English dentistry. The band smokes, her longtime collaborator Mark McEntee rips up the guitar chords, Charlie Dayton hammers the drums, and Lee Borkman is properly geeky on keys.

The songs are, for the most part, unfamiliar to my American ear. Even “Science Fiction,” which was named one of the top 30 Australian rock songs doesn’t ring a bell although it’s a fine ditty. The two hits are the obvious “I Touch Myself” and “Ain’t Gonna Eat My Heart Out Anymore” and they still ring as strong as they did 20 years ago.

More than a quaint time capsule, less than an earth-shattering rock orgasm, this concert is well done with solid musicianship and a rock attitude that says “We ARE stars, YOU are the uninformed.” Aussies can rock with the best, and they can put eroticism on stage as well.