When the blood rushes to your head and your vision tunnels into a pinpoint of light, your surroundings become mute and seemingly cease to exist outside of your narrowed gaze… you are having a live music orgasm.

…or you’re about to faint. The two sensations are remarkably similar. 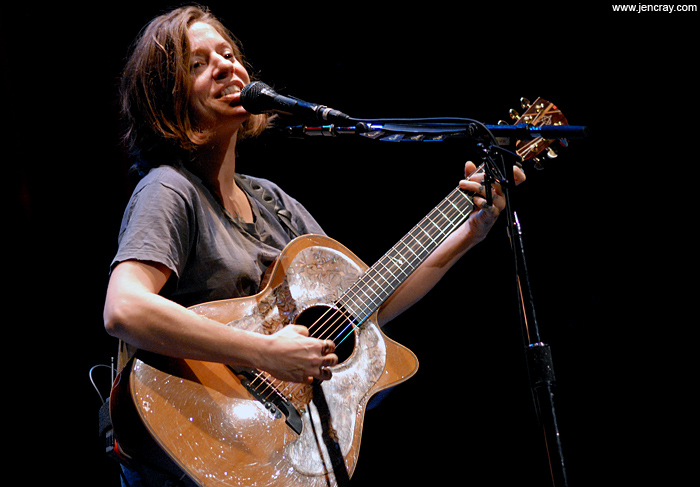 From my seat in Orlando’s Plaza Live Theatre, Ani DiFranco took me to such levels of enjoyment from the moment – three songs in – that she plucked out the painful, heart-wrenching chords of “Dilate.” She doesn’t pound her guitar to a pulp anymore, and her eyes don’t well up with emotion on this tumultuous tale of love and resentment since she’s found maternal and marital bliss, but “Dilate” still resonates for those of us “sad souls” for whom Dilate is their favorite album, as she put it.

And, speaking of maternal bliss, DiFranco dropped a bombshell by casually telling the audience that she’s pregnant again. Her last pregnancy was followed by a nearly five-year absence from the road. Those of you putting off seeing her “until next time,” should consider yourselves warned. 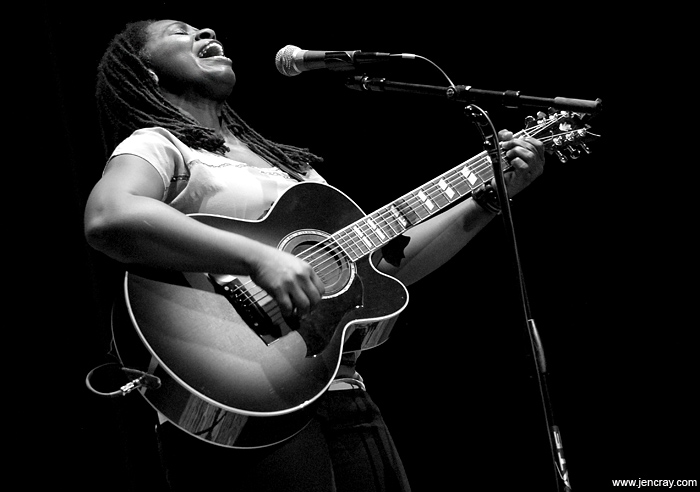 In my post-concert euphoric haze, I completely jumped over the opening act, so let me chapter back a few steps to Ruthie Foster. She looks like Tracy Chapman, and sings like a gospel singer gone mainstream – meaning, one who throws into her set covers of Johnny Cash and U2. She’s got the lung capacity of a deep sea diver, which hides behind her big “knobs” (as she jokingly referred to them, after they kept bumping into the volume controls on her guitar), and a commanding vocal presence that inspires the occasional standing ovation. For an opener to pull in that sort of response from the famously devoted Ani DiFranco audience – kudos to you, Ruthie. 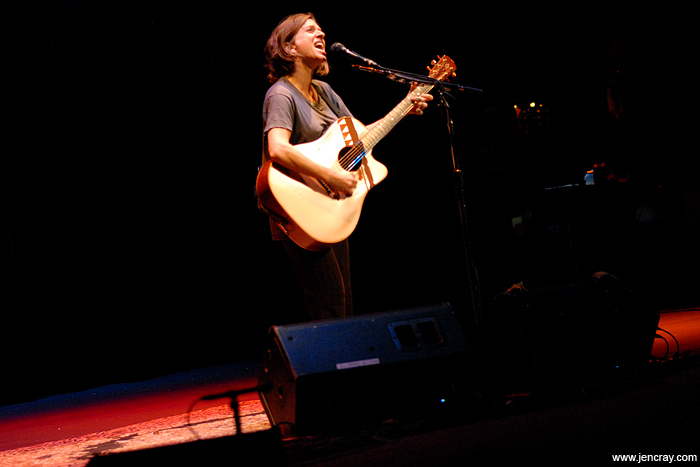 While kudos are being handed out, a double helping needs to be offered up to the folks in charge of The Plaza Live, for two reasons. First, for renovating both the small and main concert halls, improving acoustics and allowing for larger capacity crowds. Second, for bringing Ani DiFranco back to Orlando (she hasn’t played here since 2004)!

She’s solo on this trek, unless you count the half dozen guitars she juggled, including a gorgeous tenor guitar that had all of my musician friends drooling. Motherhood has not slowed her down one bit, as demonstrated by her nearly two-hour set. The “new” Ani may not be brewing her anger as hot these days, but that doesn’t mean she’s not angry anymore… well, except for when she’s singing the song “Angry Anymore,” which she did, causing my vision to tunnel once again. I’m a sucker for the sweet pain of songs that bring my brain back to my teenage years, what can I say? 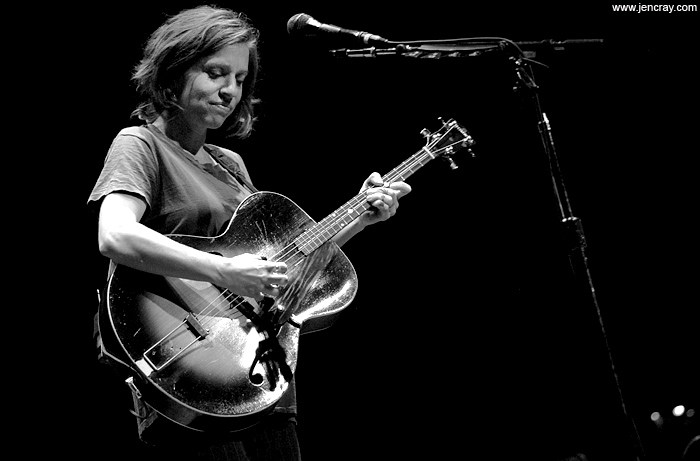 On her latest album Â¿Which Side Are You On?, she criticizes both the government and marijuana laws on “J,” and calls out Obama on her interpretation (not “cover”) of “Which Side Are You On?” – a song written by Florence Reece in the ’30s and made famous by Pete Seeger a few decades later. On the record, Seeger does guest vocals and plays the banjo, but in concert, the audience provides the extra voices that help this political anthem reach a crescendo. This song, and other tracks off of the rather monotone Â¿Which Side Are You On?, are reinvigorated in the live setting and feel a bit more like the Ani DiFranco old fans grew to love 20 years ago. One thing that’s changed, over time, is that the audience has finally learned when to shut up and listen, allowing for pin drop moments like during “Albacore,” a song where quiet is an instrument. 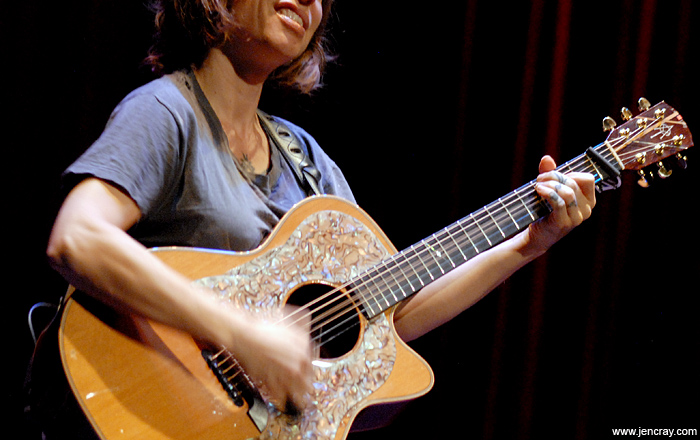 Jen Cray
Still plucking after all these years

Like Bob Dylan, a loooooong career means a lot of songs, and due to the wicked constraints of time and memory (how DO they remember all of those songs?!), some fan favorites are bound to get left off of the list. Rather than dwell on what didn’t make the cut, Orlando fans chose to lose their minds to the bones they were thrown. “Two Little Girls” got groups of girls running past the seated masses and pressing themselves up to the stage’s edge – funny how a song about a lesbian love gone bad with heroin addiction can garner screams of delight. “Untouchable Face” and “You Had Time” satisfied everyone’s inner manic depressive, and “Swandive” gave everyone reason to sing along at top volume. 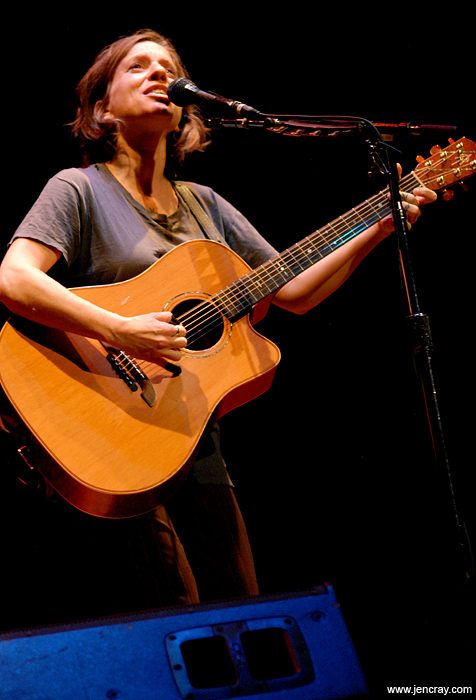 The in-between song banter, a window into the singer’s private life, is treated like part gospel/part stand-up comedy and everyone claps or giggles at the appropriate moments. Fans listen to it all with bated breath and when DiFranco self-deprecates (“Who the fuck made me a mom?!”), they fall in love with her even more.

The end of the night comes quicker than it seems like it should, and an encore of “Gravel” and “32 Flavors” only stirs the room up more. Rather than a kiss goodnight, those old songs wake us up like a big gulp at midnight, and remind us of why we fell in love with Ani DiFranco in the first place.

Gallery of live shots from this show: Ani DiFranco.