Fireworks, as rainbow brilliant as the supporters of the Pride Festival it marked the culmination of, lit up downtown Orlando as the moon rose on one more Saturday night. Meanwhile, another firecracker’s fuse was about to be lit as Denton, Texas’ Riverboat Gamblers were poised for their return to The Social’s stage… and by “poised for their return,” I mean pounding back some of their backstage brews and nodding along to their opening acts. 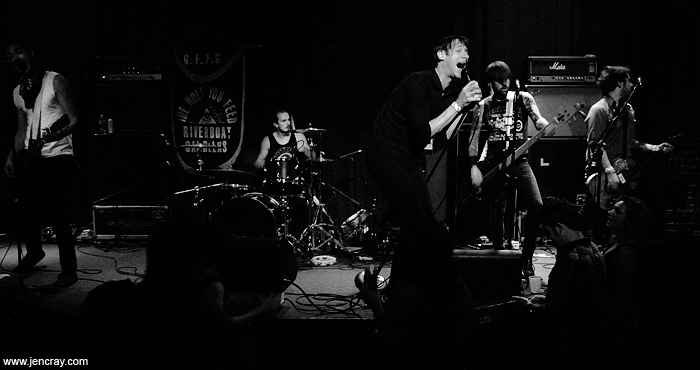 It’d been over three years since the captains of punk ‘n’ roll had come through town – if you don’t count their short Warped Tour set two summers back – but Gamblers fans are a loyal bunch. Out of sight is NOT out of mind, and central Florida forgives the band for its long-ish absence. “Gamblers Forever, Forever Gamblers,” as their motto (and backdrop) declares. 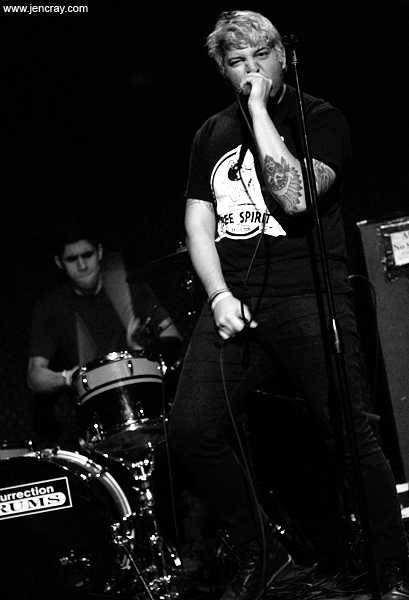 A striking warm-up set by local hardcore band Direct Effect dialed the mood back to the D.I.Y. vinyl days of Minor Threat and Black Flag. Fast, harsh, melodic metal with screamed-out vocals may be a familiar formula, but Direct Effect brews it strong. Their frontman plays it a little on the shy side, often turning his back to the audience, but there’s a bolder performer just beneath the surface. A band worth keeping tabs on, for sure.

On the Wolves and Snakes Tour, as this month-long jaunt is called, it’s Cobra Skulls who supply the reptilian half of the epithet. The trio from “the biggest little city in the world” – or as I like to think of it, “the city policed by Lt. Dangle” – plays the kind of punk rock that made you fall in love with the genre, with a hint of a psychobilly zest. Led by bassist/vocalist Devin Peralta, whose Argentinian heritage sometimes seeps into the music in the form of the occasional Spanish lyric, they plow through a no-nonsense set with little to no dialogue between songs and no venturing outside of their individual positions onstage. Sounds boring, right? It’s not. With a sound so tight and familiar, Cobra Skulls doesn’t need any bells or whistles to hold the interest of the crowd. 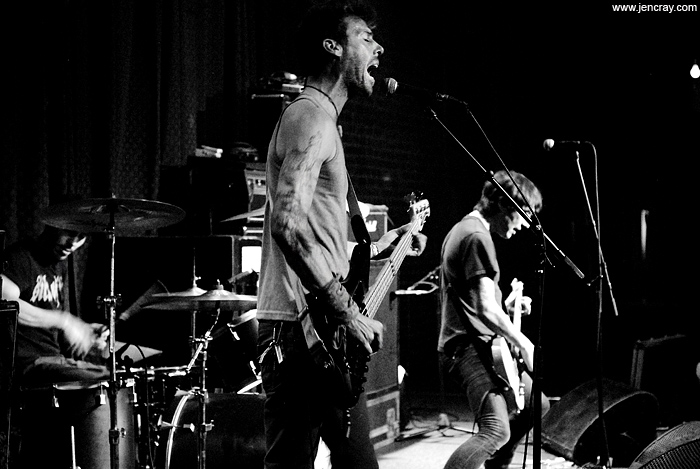 “…but what about the “Wolves” half of the tour title?”, you desperately cry out. The Wolf You Feed, Riverboat Gamblers’ latest release, is the product push of this festive trek and they play almost every song on it – along with a dozen other delectable dishes from their decade-plus career, including a rarity from 2004’s Backsides called “Death By Stereo.” They even played shouted-out requests for “The Curse of the Ivory Coast” and “Ice Water.” If they crammed any more songs onto their setlist, they would’ve needed a second sheet of paper – the curse of two-minute punk songs: you’ve got a lot of memorizing to do before heading out on tour! 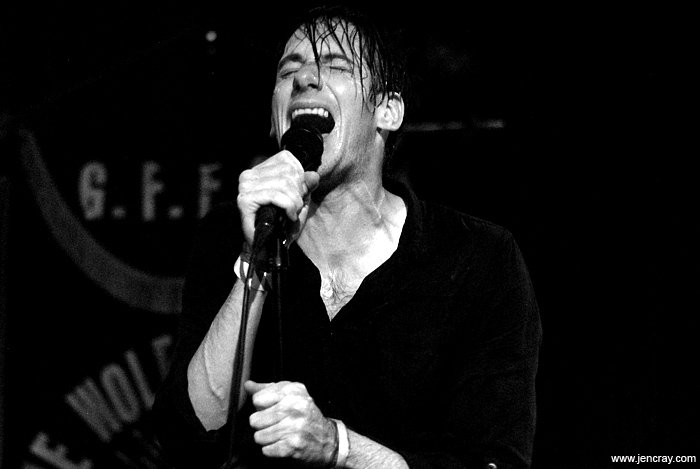 You know what’s great about these kind of classic punk shows (aside from the ear candy)? There’s an unspoken etiquette regarding technology, in that the usual cellphone usage and perpetual video recording of a concert is grossly frowned upon by both fans and band. It’s a very “in the now” culture and when someone breaks this subtle code, he gets called out on it… in this case, by Riverboat’s lead Gambler, Mike Wiebe.

Without missing a line, Wiebe snatched a phone right out of a talker’s hand and sang into it for a verse before returning it to the dude, and asking, “Who’s Madeline, and why isn’t she here tonight?” 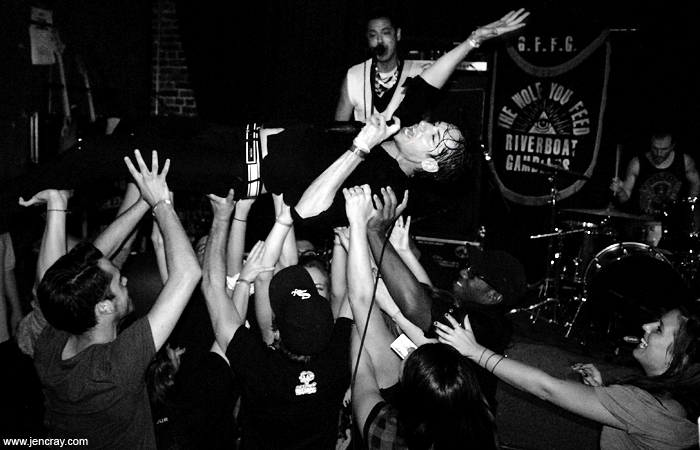 Like a coiled spring that’s been tossed against a wall, the electric frontman was on and off the stage – on and off the ground, too, if you want to get technical – and even stepped outside to sing into the Orlando streets, at one point. Then there’s his elusive sarcasm, inspired by the audience’s sleepy behavior, which came in the form of Wiebe imploring us all to gather close, catch him rolling off of a railing, and create “the slowest crowd surf EVER!” 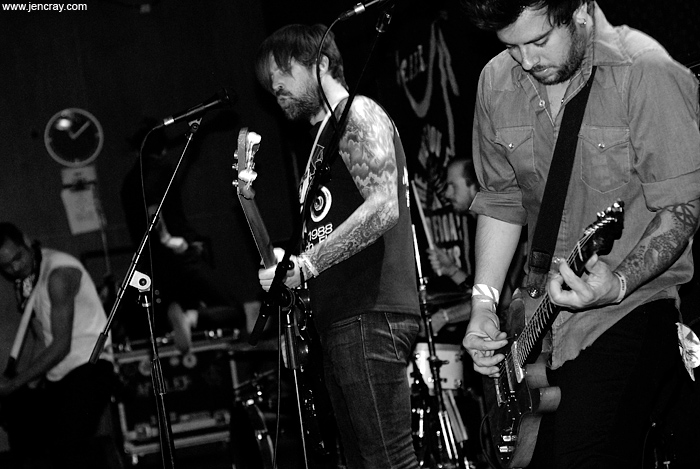 While the voice of the Gamblers worked the room, Ian, Fadi, Bobby, and Sam kept tethers on the music. With all of the focus that Wiebe’s stage presence commands, it’s easy to miss the mad skills of the rest of the band. That would be a mistake. They score the chaotic mood of any room that they play with unequivocal precision, and are soaked to the bone by the end of it – the mark of any good band. 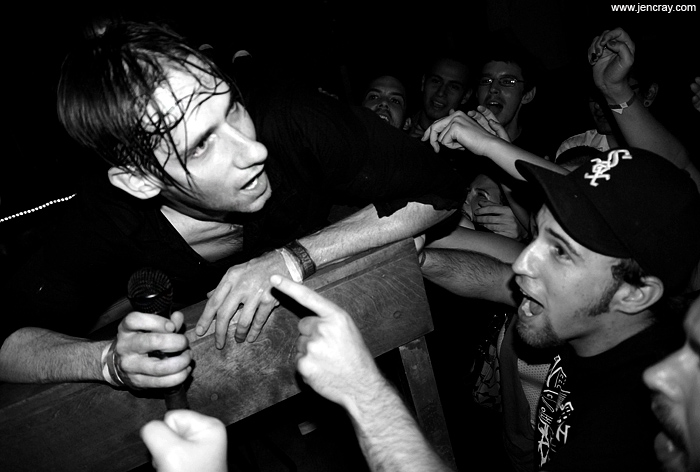 This band never disappoints: on record, or onstage.

Gallery of live shots from this show: Riverboat Gamblers and Cobra Skulls.