During a live broadcast from New York on a Saturday night in December, 1975, a young filmmaker named Gary Weis demonstrated the poignant potency of the short film. Introduced by host Candice Bergen, Weis’ tear-prompting short – roughly three minutes’ worth of people embracing at an airport arrival gate, set to Simon & Garfunkel’s “Homeward Bound” – proved to be one of his simplest, yet most profound efforts.

It certainly helped establish the fact that there was a little more to a new late-night sketch-comedy show than sketch comedy.

Three decades later, I came across Weis’ short and SNL’s famous inaugural Christmas episode amidst the boxed DVD set of the show’s first season. Last Christmas, I re-discovered the clip as it was being passed around on Facebook by weepy, nostalgic, like-minded friends. As the holidays approached this year, I determined that I would track down Gary Weis and hear the story behind Homeward Bound_._

Weis has had an incredible, and incredibly charmed, career; filming shorts for SNL during its early years led to other projects with friends Steve Martin, John Belushi, and Dan Aykroyd, among others. Weis worked on The Rutles: All You Need Is Cash_, and directed some of the MTV era’s most memorable music videos (Harrison’s “I Got My Mind Set On You,” Paul Simon’s “You Can Call Me Al,” The Bangles’ “Walk Like an Egyptian”)._

I considered the possibility of discussing such accomplishments to be gravy, however. What I really wanted to know was just how Weis created his own luck during that week in December of ‘75. 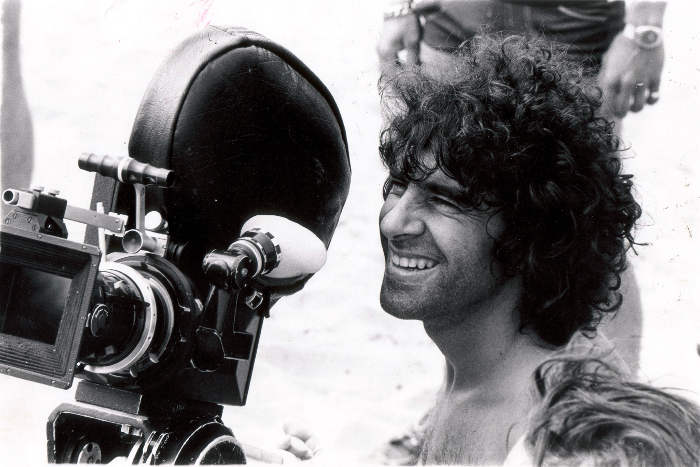 “We went out to the International Arrivals building at Kennedy; I knew that the international flyers would probably be more emotional,” Weis recalled via phone. “The one woman with a bunch of flowers, she hadn’t seen her sister in something like 25 years. I can’t remember all of the [travelers’] circumstances…. I must have had releases, permission to film. To tell you the truth, it was so long ago, I don’t remember [all of the details]. These were crazy times, to say the least! It just worked out… And the song was perfect for all of it, right on the noggin. Paul Simon had hosted [that October], and that’s probably what gave me the idea.”

My interview with Weis turned out to be a couple of quick chats. I first reached him on his fishing boat off Santa Monica; the next day, Weis answered in his car as he weaved through traffic. The director is retired now, but retirement seemed to be keeping the SoCal native as busy as ever.

I inquired about the logistics of “short” filmmaking during SNL’s heady early days.

“Back then, this was just 16mm and four guys in a station wagon; we usually didn’t use lighting or anything,” Weis replied. “Normally, what I’d do is get an idea, and go out on a Monday or Tuesday and film. You have to understand, everyone was getting paid $300-$400 a week that first year, it wasn’t a big deal.”

Though filming the shorts was often done quickly, it wasn’t exactly spur-of-the-moment. Weis would do quite a bit of scouting, and he said he didn’t film anyone who didn’t want to be on camera; a degree of comfort was essential. A prime example of this technique is The Funniest Person in Town, starring Buck Henry.

In stark comparison to today’s manic, bursts-of-hilarity SNL shorts made by Andy Samberg and his brilliant gang, the show’s early film offerings were often quietly eclectic and seemingly innocuous – Weis’ experience in documentary films fit right in. Apparently, no idea was readily dismissed. An early concept of going to a town rumored to be “full of little people” segued into boarding a train car in New York carrying diminutive circus performers, Weis remembered. The film never came to fruition, however, as the crew was denied permission by the circus’ home office.

I marveled at the freedom that this sweet gig must have afforded.

“Oh, there was an incredible amount of freedom,” Weis agreed. “I was in on the ground floor, which was a very good place to be. Lorne [Michaels] and I had been friends for a while, and I was presented [to NBC executives] as being the ‘Charles Kuralt of Saturday Night.’ It was all pretty vague, at first, as to what exactly I’d be doing. It was a joy, because I was autonomous in the stuff I did… [the cast] and I would talk about everything, everyone was friendly, and my opinion was valued because I didn’t have an axe to grind.”

Weis wasn’t overly enthusiastic about peeling back the decades for me; the filmmaker gave the impression that he respected my respect for his career, and was very gracious – but hardly boastful. With a slightly rough-hewn voice, he told me, “I never like to hear someone talk about his own work.”

Given Weis’ previous involvement in making the classic 1973 concert documentary, Jimi Hendrix, I assumed that he had attended film school. I guessed wrong, but was soon glad I had brought the subject up.

“I used to go out with a gal named Sharon Peckinpah [director Sam’s daughter],” Weis informed me. “I actually lived in the Peckinpahs’ house in Malibu for a while. Sam was divorced. I was a young photographer, and he had seen some of my photographs and liked them. Once, he came in the room, a little bombed, and said, ‘Gary, I got an idea… you’ll make a little film about the making of The Ballad of Cable Hogue.’”

“It was my first experience [in motion pictures],” Weis continued. “I had a guy helping me in the editing room. It was quite an experience. I got about ten years’ worth of film education in a year… the 17-minute film took a year, year-and-a-half to finish.”

Saturday Night (the “Live” would be added later) led to more work. In 1976, Weis directed a Beach Boys special with an opening sequence that would prove to be one of the coolest – and more bizarre – moments in television history: Aykroyd & Belushi, dressed as mustachioed policemen, dragged Brian Wilson out of his infamous bed to go surfing.

Weis recalled that “Brian was very, very zoned out at the time… he was out of his bed, really, but he was in a… state.” The director added that his infamous “keeper” at the time, Dr. Eugene Landy, fussily got more and more in the way of filming. 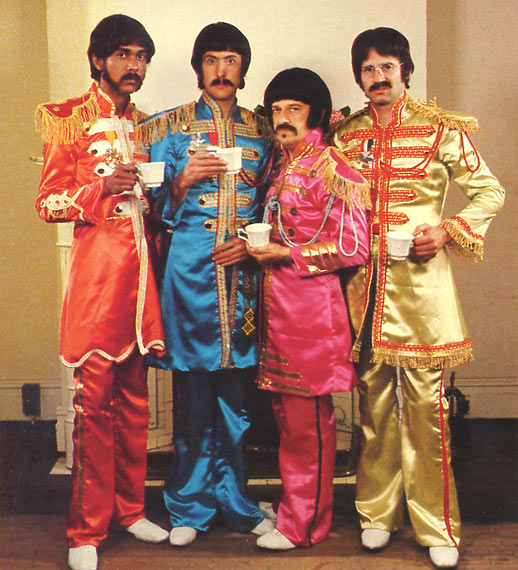 One project led to another, in a blur. The director fondly recalled the Monty Python/SNL cast mash-up / Beatlemania parody The Rutles: All You Need Is Cash “as one of the great long-form things that I’ve worked on,” adding that “Eric [Idle] had researched everything so well, and everyone who was working on it really wanted to do it.”

Weis met George Harrison through The Rutles and Idle; later, he was invited to Harrison’s home in England. 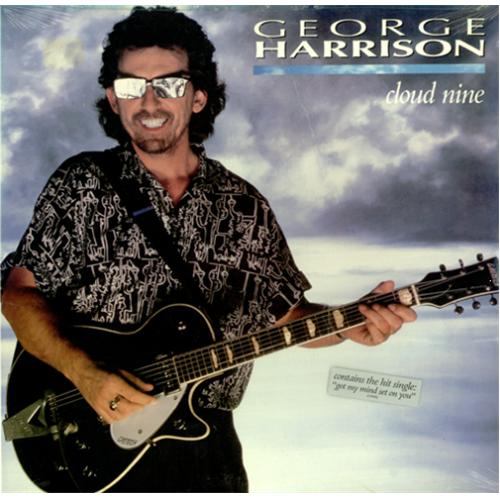 “George was a sweet man, really down to earth,” Weis said. “ I remember him telling me a story about how when the Beatles became famous, Harrods closed its big food court once so the band could come eat whatever they wanted. Harrison thought that was a really big deal at the time; he said, ‘It was unbelievable, getting to eat all this exotic food!’ That was the sort of guy he was.”

The director remembered the video for “I’ve Got My Mind Set on You” in a technical context.

“When George does a backflip off of that chair, I had cut it so it really did appear to be him,” Weis offered. “But George said, ‘I can’t have people believing I’d do that,’ so I actually went back and jump-cut it to make it look less realistic.

“I think the record company liked [the video] because I got George to smile a couple of times,” he added.

Weis saw my query about a favorite Belushi memory coming from a mile away, and had one waiting. 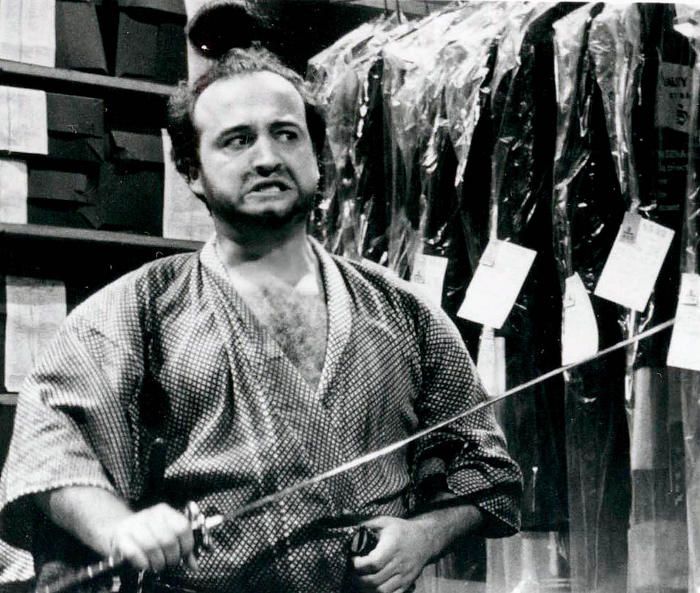 “One day John wanted me to come with him to look at a place he was thinking about renting,” he said. “We get into the cab, and after a while we notice a big fat wallet sitting between us. We picked it up, and it was full of cash – must’ve been five, six hundred bucks in it, credit cards, the whole works.”

At this point in the story, I’m beginning to imagine Belushi’s famous eyebrows in action. I think Weis was, too; we were both chuckling.

“John wanted to keep the money; we’re talking about it the whole way,” Weis continued. I said, ‘Man, c’mon. Let’s return it, we have his address… he’s bound to give us half.’ John finally says, ‘Shit, man… alright, alright.’ The guy’s address was on the Upper East Side, nice neighborhood. We go up to this brownstone, ring the buzzer.”

“‘I’ll be right down.’ The guy opens the door and says, ‘Wow. That’s really great. Thanks a lot.’ And hands us five bucks. I was flabbergasted.”

“This guy then said to Belushi, ‘Hey, you’re that guy on the show!’”

“‘Yeah, yeah.’ I got so much shit from John afterward. The whole thing was unbelievable.” 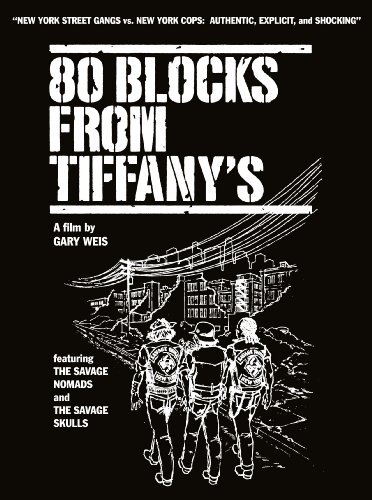 Weis briefly returned to documentary filmmaking in 1979 to direct the acclaimed 80 Blocks From Tiffany’s. The film, chronicling pre-hip hop gang culture in the South Bronx, has enjoyed a resurgence in popularity in recent years.

Eventually Weis segued into directing commercials, beginning with his friend Randy Quaid and a series of Miller Lite spots. More than 500 commercials followed before Weis decided to enjoy fishing pretty much full-time.

He still gets inquiries and comments about the Homeward Bound clip from so long ago. Weis’ wife sent me an email they once received from the jacket-and-tie-wearing teenager with a sheepish smile. He’s a bit older now. The email read, in part:

“Gary, It was such a pleasure to find this film on the Internet. I am on it, along with my mom and aunt. I was 15 at the time, and being on SNL was about the coolest thing that could happen (even if it was with your mom). This was our 15 seconds of fame. My mom is gone for many years, but I just sent the link to my aunt, who is 87 – she is going to love it. And I can’t wait to show it to my daughters.”

Weis is obviously proud of the longevity of the video’s popularity – his website (see link below) automatically loads it when one clicks on the page – but the “Film Director and Fisherman” seems more than content to keep most of the wild, booze-and-drug-fueled Seventies on the shelf. There’s fishing to do, you see, and his beloved Baja to get to before the holidays.

While Gary Weis drops a line into the blue Pacific, though, he has to know that people around the world continue to laugh, marvel, and… at Christmastime, perhaps shed a tear while watching one of his creations.

What a thing to savor, while waiting for a big one to bite.