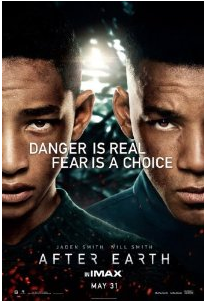 The film is out, the reviews are in, and the hype has been swept up like so much theater-floor popcorn. At this point there’s nothing left to do but take gratuitous potshots, since the chances of anyone being talked into seeing (or better yet, not seeing) this film have dropped to near zero. But let’s continue, for I have Things to Say. Spoiler alert: this film sucked.

In After Earth, Will Smith plays a veteran of the bug wars. At some point, mankind ruined its planet, and in the process of evacuation and resettlement ran into some hostile aliens. It was the alien’s planet that we colonized, but whatever. These unseen xenos have developed creatures called “Ursas” to get rid of the pesky humans. Not at all bear-like, these Ursas look like a cross between a naked mole rat and a mole cricket, with the legs glued on all wrong. They are bred to hunt us and impale us on trees, and this last behavior probably consumed most of the genetic engineering budget, because the only sense these creatures were given is the ability to smell human fear.

Which gives us a typically M-Night-Shyamalanny plot twist-hole: General Cypher (cough, Will Smith) has the freakish ability to feel no fear, and is therefore invisible (a ghost!) to these fearsome SUV-sized not-bears. In an effort to bond with his young son Kitai (Will Smith’s son, Jaden Smith), he decides to take him to some sort of off-planet training exercise. When a freakish asteroid storm disrupts their space hop, they end up crash-landed on a quarantined Earth, with only the galaxy’s most poorly-designed emergency gear and a shambolic father-son script to fend off one (1) unfortunately-escaped Ursa that also happened to be on the ship. Where’s OSHA when you need it?

In the end, young Kitai learns to master his fear like his ole dad, and the eventual strengthening of their fragile relationship overcomes the complete lack of suspension of disbelief the movie engenders, or so the makers of the film would tell themselves every day before its release.

It’s such a frustrating experience that eventually all reviews turn to blame. Is it Will Smith, awkwardly playing a battle-scarred un-charismatic veteran bug squasher? The hubris of a father-and-son-survive-peril movie starring an actual father and son, based on a story written by the father? The script, with its unnecessary flashbacks and fetish for restating what’s obvious? The director, whose hyper-focus on this fear/ghost thing seems to imply a plot twist which never comes?

I’m going to go with the last one. M. Night Shyamalan had a great start out of the gate, but now it seems like each film is an effort to outdo the previous on the tropes that gave the director such success, with everything else falling by the wayside. Obsession on a detail upon which a critical plot twist will rest, quiet scenes of fraught human relations, a sparse methodical pace, and a cameo (in this case, spaceship navigator or coyote-baboon, I’m unsure). Shyamalan must have the thickest skin in Hollywood, because mockery of ineptitude is one thing, but there is nothing more shrill than critics harping about wasted potential.

Spoiler alert: After Earth 2 is in the works.