Van’s Warped Tour is so far from where it began, in 1994, that it really should have had a name change by now to, at the very least, protect the memory of what used to be. What started as a partnership between skateboarding and the music the skaters were into (namely, punk and ska) has evolved with the times and tastes to arrive in 2013 an example of how jumbled and often undeveloped modern day music has become. 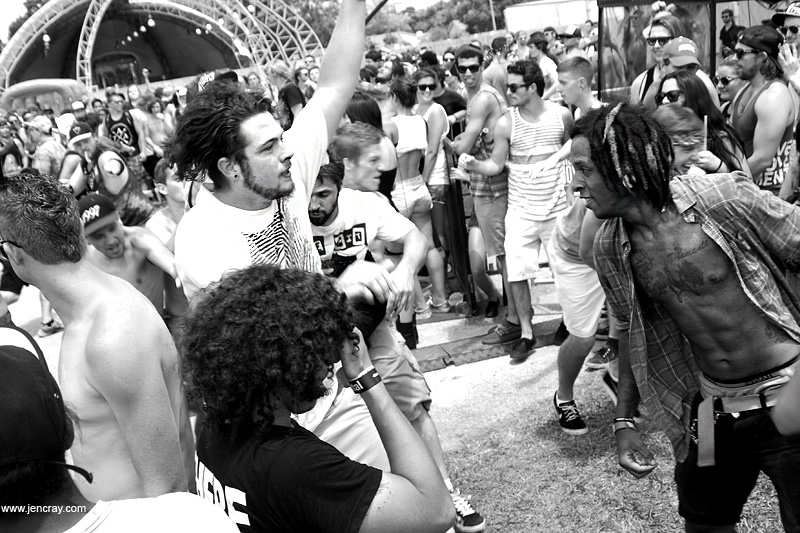 Jen Cray
While She Sleeps’ crowd

Each of the eight stages hosts a completely different style – ranging from the metalcore of the Monster Energy Stage, where While She Sleeps erupted a massive pit, and the Forever the Sickest Kids type pop of Tilly’s Stage, to the EDM at the Spotify Stage (whose crowd ALWAYS seemed to be having the most fun). Who knew DJs, dubstep, and rap could find a comfortable home in broad sweaty daylight? One of the most exciting new artists I stumbled upon was Crizzly – a DJ of “crunkstep” who battles the boredom of watching a DJ by incorporating a few guys who rap and jump around to keep the crowd engaged. 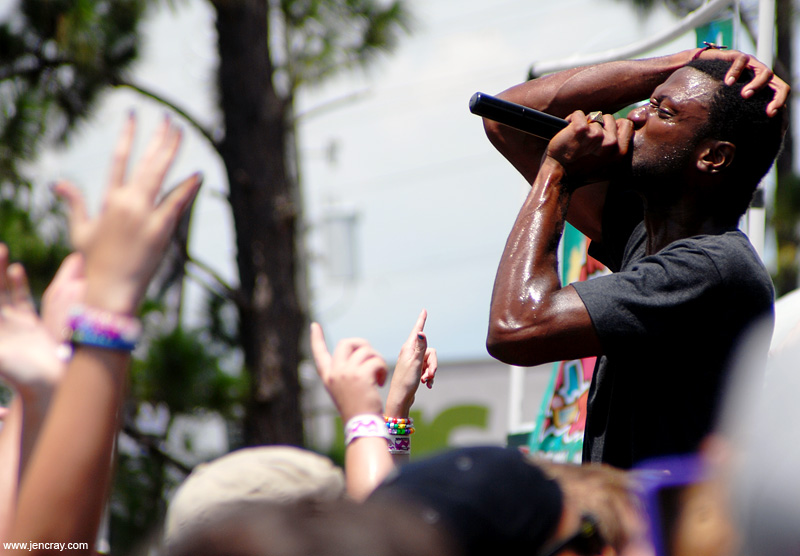 It works. Their set, and one an hour later by Wallpaper. (a band who won me over when I saw them open for The Sounds a couple of years ago), brought the party to the fairgrounds. 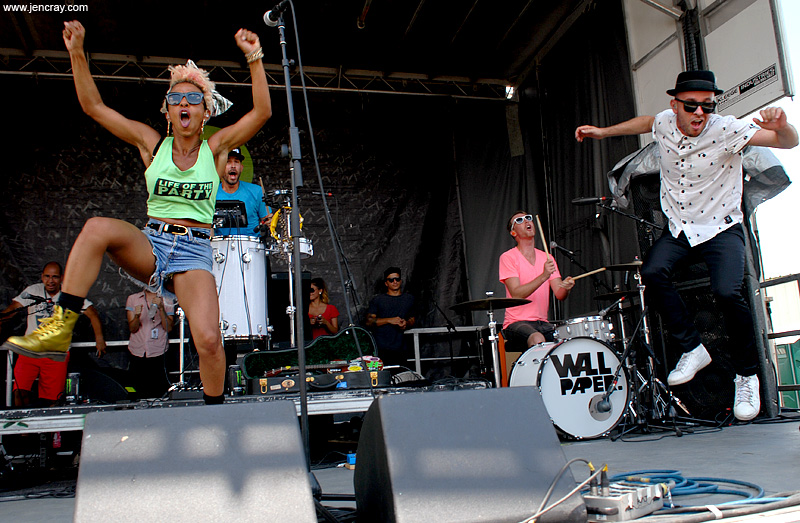 As usual, the two main stages (Kia Forte and Kia Soul) were lined up with one band after the other that made me shake my head in wonderment, thinking Really? This?!. 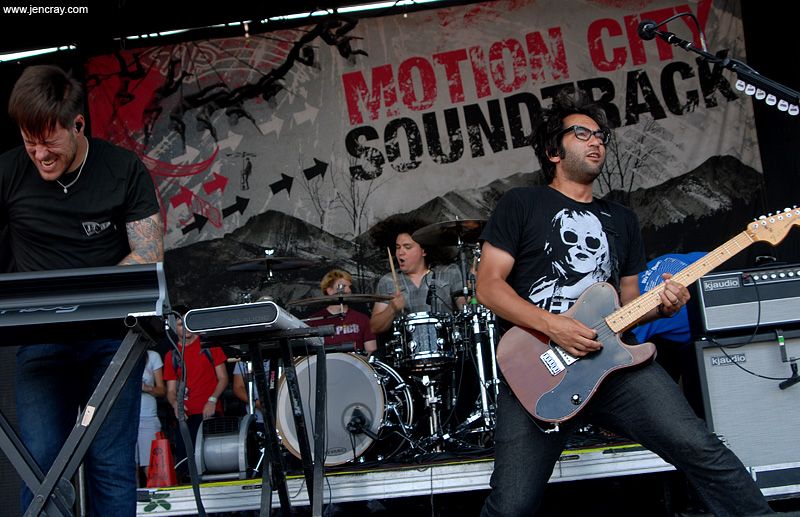 The crowds here were thickest. Unbearably thick, actually due largely to the fact that the tour’s previous show (in West Palm Beach) got delayed because of storms and those ticket-holders were granted free access into the Orlando date as compensation. A super nice gesture on the part of the Tour’s organizers, but a bitch of a burden on Orlando in terms of crowds, traffic, long lines to get in/to get water/to pee, and more cars than the fairgrounds’ lots could handle. Just a few hours after doors opened, the lots were filled and blocked off. I can’t even venture a guess where late arrivals had to park. 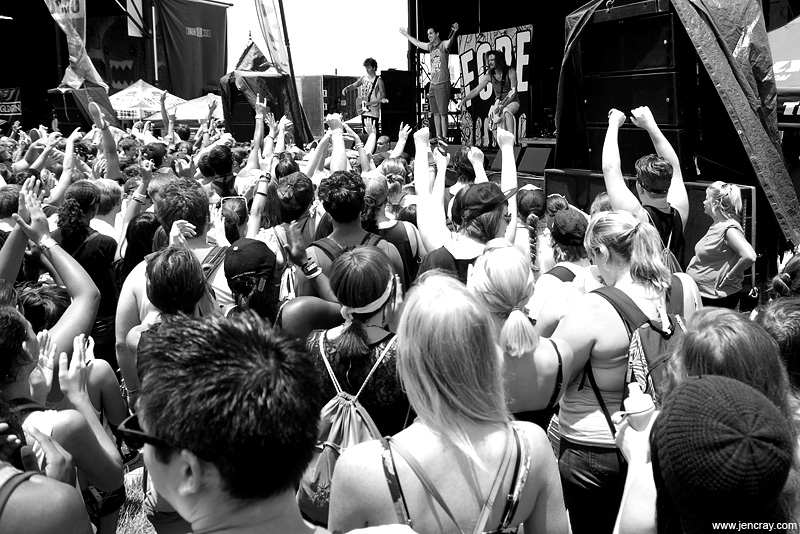 Luckily Warped Tour fans are some of the most pleasant, easy going kids you’re likely to come across. Everyone’s just looking for a good time, just looking to have “the best day ever” – an often-heard phrase tossed out by bands like The Wonder Years and Memphis May Fire. 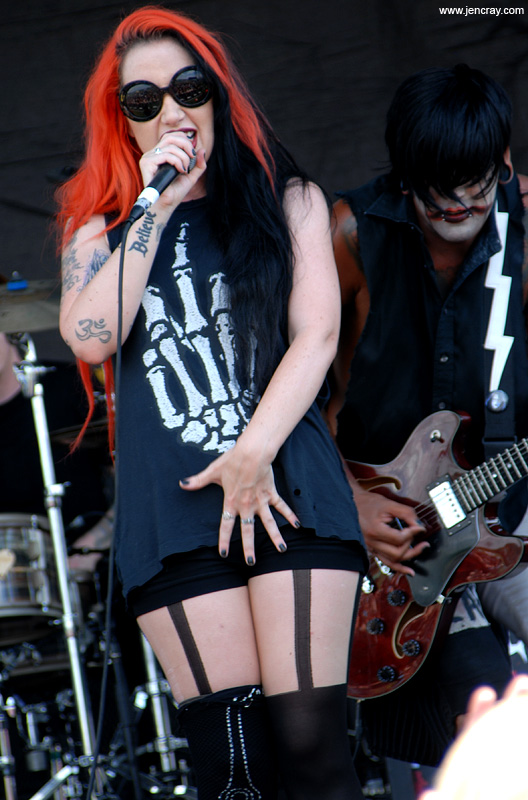 For many young fans this one day at the ass end of July, just weeks before school’s back in session, is the culmination of one long hot summer. It’s their one day to be free – to stick their parents in Reverse Daycare (an actual thing, at the festival, and parents get in free, by the way), shed their inhibitions (and most of their clothes, in some cases), and be as free as the silly string that shoots through the air during New Years Days’ fun-filled set. “Fun-filled,” yet including a chainsaw wielding, middle finger wiggling, bloodied up Minnie Mouse, and a smiley goth chick holding up a sign that states, “Kill.” Still… fun-filled. 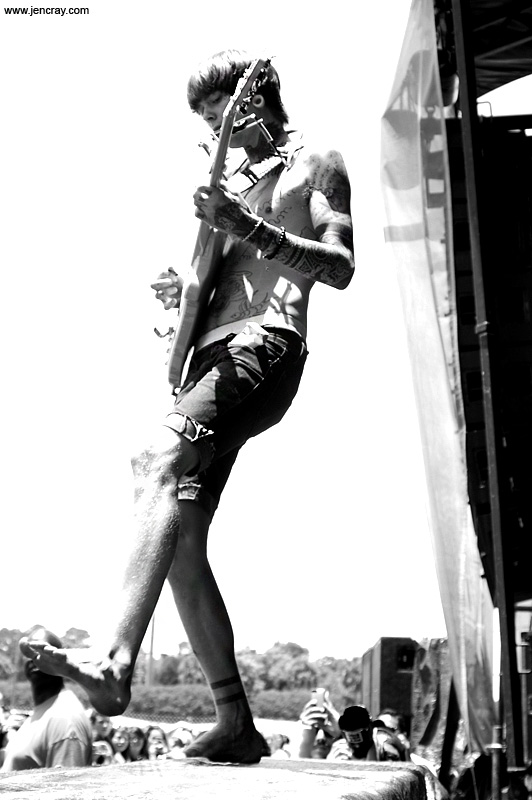 Warped Tour is an ever changing, yet constant comfort that symbolizes both summertime, and youth. You (or I) can moan about the crap bands, and how there was once a time when the music had more of an edge. We can all bitch about the heat, and the silly-looking kids in their makeup and Speedos, holding signs up offering “free hugs.” We can criticize (and we DO), but there’s still something so pure and fun about the Warped Tour, even as it gets bigger and more commercialized. And that’s why we keep going back, every. Single. Year. 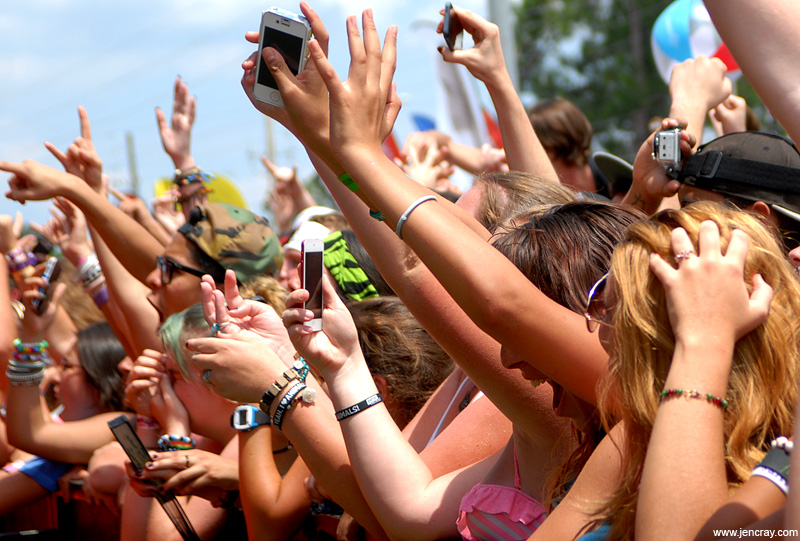 It’s like keeping a tether on our high school years, if only for one day.