by Jon Wiederhorn and Katherine Turman 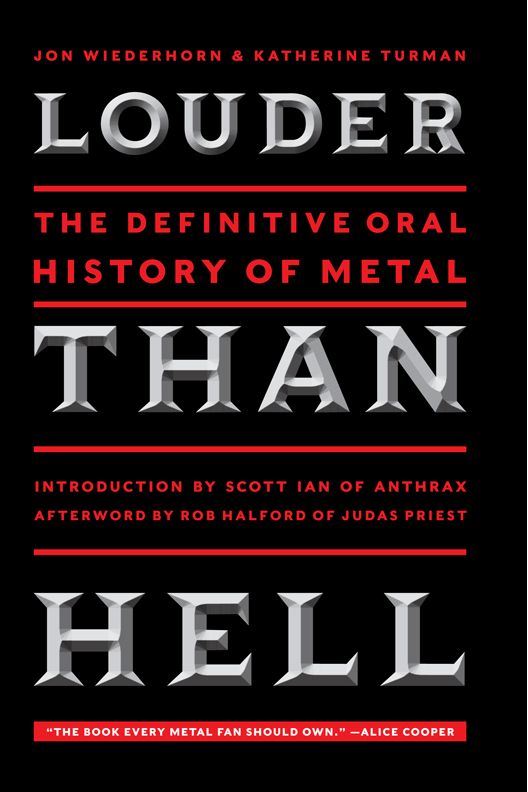 There are few pop culture subjects more formidable than the history of metal. Sure, one could write a fairly straightforward historical account starting with heavy rock in the late ’60s and ending up with whatever the disaffected kids are listening to today, but with so many sub-genres and styles and offshoots, it seems an author would concede defeat right after grunge took hold, the conventional ending point for many of the books on the subject.

Authors Jon Wiederhorn and Katherine Turman took a novel approach, compiling a nearly 700-page oral history on this often discounted genre. With over 400 musicians, journalists, managers, groupies, and producers interviewed, Louder than Hell: The Definitive Oral History of Metal will likely stand as the final word on the history of metal. Louder than Hell begins with the emergence of British and American heavy rock, touching on Black Sabbath’s discovery of the tritone, that three-chord riff in “Black Sabbath” that gave birth to thousands of bands and dozens of sub-genres. From there, each chapter focuses on a sub-genre of the music, with the rise and fall of major bands and movements. Covering everything from glam metal, industrial, nu metal, crossover, thrash, doom, black and death metal, if it’s loud and heavy, it gets a chapter. The interviews are exhaustive; it is hard to think of anyone connected with the music that was not interviewed or mentioned.

As with all oral history collections, half of the fun is reading differing opinions and recollections on key events and discovering new aspects to much-interviewed subjects. Naturally, Ozzy and Lemmy give great quotes, but who knew the guys from Slayer could be funny?

The New Wave of Heavy Metal looms large over the book. With following metal bands taking the influences to form thrash on one hand and doom on the other, it could be argued that this genre provided templates for much of what we think of as metal today.

Naturally, the reader’s interests will determine which chapters are more compelling than others; I found the chapter on Death Metal fascinating, especially since this scene hasn’t been written about as much as some of the other offshoots. The crossover chapter is a good read as well, if only to remind us how terrifying bands like the Cro-Mags and Agnostic Front were.

Bookended with essays by Scott Ian and Rob Halford, Louder than Hell: The Definitive Oral History of Metal is the ultimate guide to the music, and must have been an exhausting task, but one well worth it, resulting in a book that will likely be the ultimate reference book on the much-maligned music.