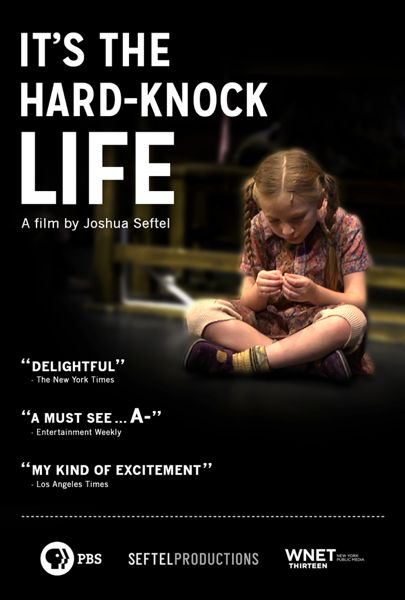 You can’t keep a good script down, and Annie was one of the great scripts of 1977. It’s been done countless times on community theater risers and professional stages, and it’s a rock solid musical with a great score, a great book, and four or five thousand eight-year-old girls just drooling to audition. This PBS special follows the revival as it goes back on the Broadway stage in 2012, and it’s a good look at the wok and anxiety that goes into any show. Here the stakes are much higher – the dollars poured into just getting this on stage are enormous, and profits may not recoup until the road tour, if then.

Part of the documentary looks at the audition and acting process, where the squeaky and underdeveloped voices grate at first but soon fall into place. We spend most of our time with director James Lapine, but we also explore the set creation, choreography and costuming. Costumer Susan Hilfery remarks “It’s not like you go somewhere and buy ‘The Annie Costume’ kit.” People who spend time in theater will recognize the players and dedication, and even the smallest community production of any script has similar highs and lows. If you’re not theatre-oriented this still intrigues, it’s a view into one of those worlds that cable TV did such great job of revealing. And yes, you’ll have “It’s the Hard Knock Life” imprinted into your brain from now until the next revival of Cats.