Is a rock art? Is moving a rock art? Is making a movie about moving a rock art? No, maybe, and yes would be my initial guesses, but perceptions can be changed by film. Out in the desert east of L.A. in a private quarry a large rock is pried loose by high explosives and diesel power. Artist Michel Heizer has been looking for a 340 ton monster like this since the 1968, and he’s got a bold project in mind: move this rock to downtown L.A. and install it at the Los Angeles County Museum of Art. The logistics are incredible, beginning with fundraising and moving to approvals and then the sheer mechanical effort to move this rock through one of the most built up places in America. Heizer’s specialty is monumental art involving construction equipment and the movement of soil, land and mountains. His works will never tour, but you might tour to see them. Like all conceptual art, the art itself is not as interesting as the reaction it draws, and that’s where this story shines. 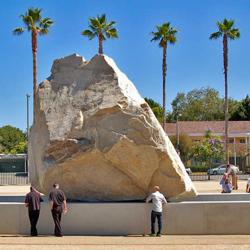 The fund raising was surprisingly easy, Heizer has fans and they can write these sorts of checks. The permitting process was much more challenging. A rock of this mass can’t roll over any old bridge or underpass; its route took it on a winding 100 mile journey all the way down to Long beach and through 20 plus municipalities, each with its own bureaucracies and none set up to deal with art projects of this magnitude. The process of mounting and moving this rock is worthy of a Discovery Channel special and the public reaction ranges from awe to incredulity. We meet custom bicycle riders and mostly pickled bar flies along the way, couple proposes and parents hold up small children. There’s drama as well, a transmission fails and the rock is danger of “running away” in the dangerous Chino hills. It’s theatrical in magnitude and human in scope and here we have a Slice of Life as a Slice of Art, and that’s what good art makes you do: examine and re-examine your perceptions and opinions. I like the rock where it is, let’s see if it lasts. Even 340 tons of Art can be surprisingly ephemeral.

This film is part of the 2014 Florida Film Festival running April 4 to 14 in Orlando Fl. Details, screening locations and times may be found at www.floridafilmfestival.com.