Encierreo: Running With The Bulls in Pamplona

Encierreo: Running With The Bulls in Pamplona

The ritual begins before dawn. At least if you’re a guy who is not quite a geezer, but no longer young enough to stay up all night dancing and drinking Sangria. For me, it’s up before dawn to put on the Pamplona uniform; white pants, white shirt, red sash and red bandanna. Then it’s time to leave the hotel for the walk down to the Old Town.

On my way, I pass clusters of young people staggering home. Some wearing outfits that are nearly solid purple from reckless sharing of wine, or maybe someone ambushed them with a super-soaker. Things get a little blurry in the wee hours.

I know I’m getting closer to my destination when I see the street vendors in the park. The narrow lanes of the medieval city are still busy. People of all ages, and in all states of inebriation move through the litter of food wrappers, beer cans, vomit and crumpled plastic bottles proving that reach ankle-deep in places. Street cleaners shoo folks out of their way as they sweep away the debris. By the time the sun is creeping over the mountains, the streets will be clean for the families when they arrive in a few hours.

I join the flow of people moving toward the Plaza Consistorial; the holding pen for those of us who have decided to run with the bulls. It’s best to get into the street early. At some point, the police will close the barriers and prevent anyone else from joining the runners. It is already crowded outside the Plaza. People have staked claim to the few really good spots to watch the run for free. As I pass through the barricades into the street, I can see people have paid for the privilege of watching from a balcony. I did that the first time I came to Pamplona. This time, I’m in the street. 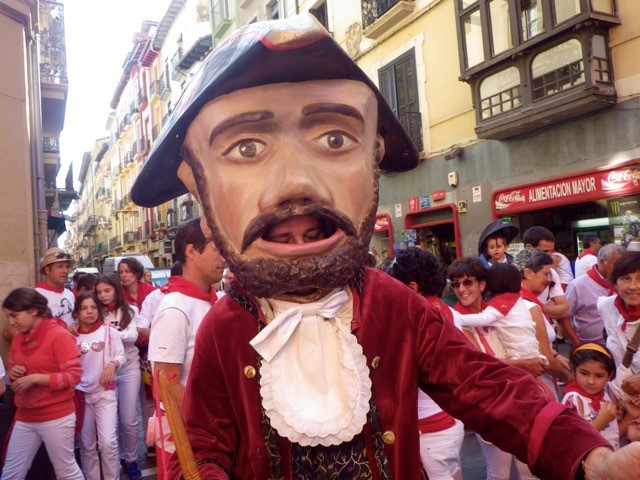 I’m in the street just after 7 o’clock. Now, the waiting begins. Paul. my bull running mentor, warned that the clock in the town hall tower is the slowest in the world.

Paul has been running with the bulls for 30 years, so I take his advice seriously. Bulls are herd animals. When they’re running, they want to stick together and just get to the end of the run. If you fall down, stay down until someone tells you it’s clear. Bulls are attracted to movement, and your backside moving around could get unwanted attention of the horn kind. Run with the bulls, not ahead of them. They are faster than you. Whatever you do, don’t antagonize the animals.

Running with the bulls is sort of safe. The odds of getting hurt aren’t that great. But we all know people get trampled, they get gored and sometimes, people die. The biggest danger is if a bull goes suelto, gets separated from the herd. When they’re alone and scared, they’re most likely to strike out at anyone nearby.

Is the clock moving?

It’s now 7:30am, and it feels like I’ve been waiting for a lot longer. The jumbo screen in the plaza sings a jaunty little tune while the do’s and don’ts of the run are illustrated by cute cartoon animated runners. I look around at my fellow runners. It’s a far more diverse group than I’d expected. At 54, I’m not the oldest person here. I spot a spry gent who looks like he’s probably in his 70’s. Some serious runners are limbering up. They’re dressed for a track meet and are probably going to race the bulls to the arena. A big guy walks past wearing the maize and blue of the University of Michigan. I hear laughter and look up the street to see three women in Harvard shirts being chatted up by some young men. It happens everywhere.

Has the clock moved? A little bit.

We’re milling about, waiting. People wander up and down Santo Domingo. Some guys stop near us. I overhear them wondering out loud what’s going to happen. Since they’re speaking English, I strike up a conversation. I share the little I know about the encierro. We share small talk about where we’re from. It turns out they’re from Orlando and I live about 80 miles away in Tampa. This is there first time in Pamplona. They didn’t come intending to run, but since they’re here, why not give it a go.

We’re getting close now. A police unit walks by, quickly followed by men in ceremonial robes who are followed by a throng in white and red. I don’t follow. I like that the street is not too crowded here at the top of Santo Domingo. My brother, Richard, who is running with me, pointed out that being at the top of the hill leading from the corralillo, we’d have a better chance to see the bulls coming.

The animated loop stops playing. The screen cuts to somewhere farther along the route on Estafeta. I have no idea what’s being said, but it looks the masses in the street are receiving a blessing. The encierro is part of the Fiesta de San Fermin.

The first rocket is launched to let us know the bulls have been released. A human wave of white and red surges up Santo Domingo. I assume an awkward starter’s pose, as if I’m taking my place in the Weight Watchers pudgy guy relay. Just as the first of the runners from reach us, the second rocket goes off. The bulls are in the street. 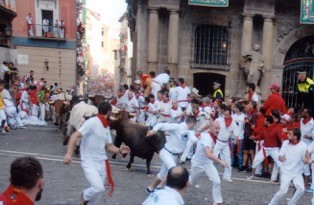 I see the first horns through the throng of runners. My brother takes off. He’s going to make a serious run. I wait. I watch the bulls get closer. My memory retains only brief snatches. The Orlando guys run past. A bit of black fur and horn rushes past like something from a roadrunner cartoon. I see a bearded guy in running shorts almost lose balance and fall into a bull. I clearly see the bulls face, I see his horns and I feel that moment of uncertainty. Is he going to keep running straight? Will he swerve to the left and catch me on those horns? Another fraction of a second passes. It’s my turn in the relay. I’m off. This is my partner in the ritual. I’m running next to this bull!

I keep up with the bull for at least five or six strides. Then, he’s gone. It is over. The bulls are out of the Plaza Consistorial, on their way to the bullring. It only takes a matter of seconds. I meet up with my brother as the next rocket sounds. The bulls are in the arena. A few seconds later, the last of the rockets sound to let us know that the bulls are in the pen. The running is over for today. The total time elapse is just over two minutes.

Municipal workers are already taking down the barricades. Paramedics are helping a guy who took a tumble. It looks like he’s hurt his arm. We head over to Bar Txoko, on the Plaza del Castillo. Americans like to gather there after the run. We order drinks from the side window where the bartender is passing out cognac and vanilla drinks. It’s not a bad drink for 8:15 in the morning. We hang out sharing our stories of today’s run, hearing what people saw at different points along the course. The inevitable question come up; was anyone gored? A few people were hurt in the final turn into the Plaza de Toros. We won’t know how badly until we see the replay on TV. 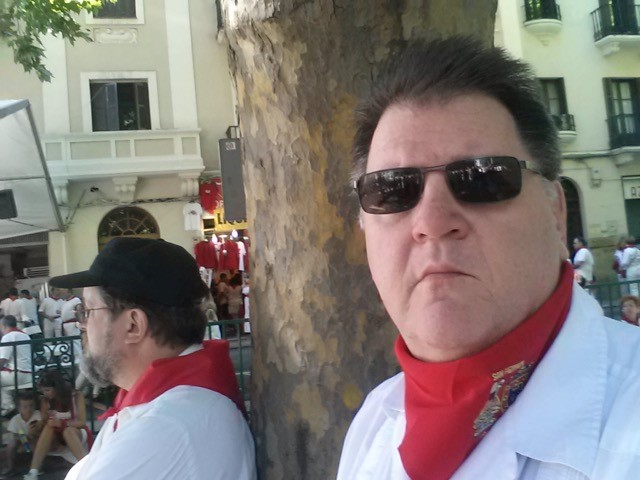 By 9 o’clock, we all start wandering off. My bother and I wander over to the photo shop in the plaza. They have a large screen TV outside showing today’s run. We scour the photo boards posted with images of this mornings run. We’re hoping that the camera caught us. Richard is easy to spot in one of the photo. I’m in the image too, but you can just see the back of my head. We order the picture, then head over to another café to get breakfast.

The running of the bulls is why the world knows Pamplona. It is a small part of the Fiesta de San Femin. During the Fiesta, the city slows down for a few hours here and there, but never really stops. Soon, the family friendly activities will begin. There will be parades in the streets. Four sets of giant kings and queens representing Europe, Africa, Asia and the Americas process through the streets. They are protected by the Big Heads, Barbas, Patata, Verrugón, Coleta, Caravinagre and Napoleon. While the royalty make their way through the street, their protectors delight in attacking youngsters with their paper and foil rods. By late afternoon, brass band will be parading through the streets, leading groups of revellers to the afternoon bullfights. The drinking and dancing, concerts and carousing will keep the fiesta going all night. Sometime before dawn, the crazy people who have decided to run with the bulls will start their ritual again.