Plenty-O-bang for the buck was in store for hundreds of rock fans when the first big-name tour collective of 2016 came crashing into Orlando’s House of Blues. However, had the event been staged by Michael Vick, it could have been promoted best as a crazed canine clash – the up-and-coming “young pups” pitted muzzle-to-muzzle against the established “old dogs” in a high-stakes backyard brawl. Psst!! -$9 says that my yappin’ Yorkie can pummel your Poodle!

Going up against four heavy hitters has got to be a daunting task – especially for a solo artist who’s also an opening, opening (opening, opening) act. But it was a task accepted bravely, and executed boldly, by singer/songwriter, Carter Hulsey. Armed only with an acoustic guitar, a snappy flannel shirt, a fistful of tunes, and an honest voice, Hulsey connected quickly with the HOB audience. The 27-year-old Missouri native engaged fans easily with his seemingly transparent, down-home demeanor – sharing personal stories woven between his authentic, heartfelt Americana-style songs. “I’m totally feeling this guy,” one particular 15-year-old female confessed to me near the conclusion of Hulsey’s 20-minute performance. 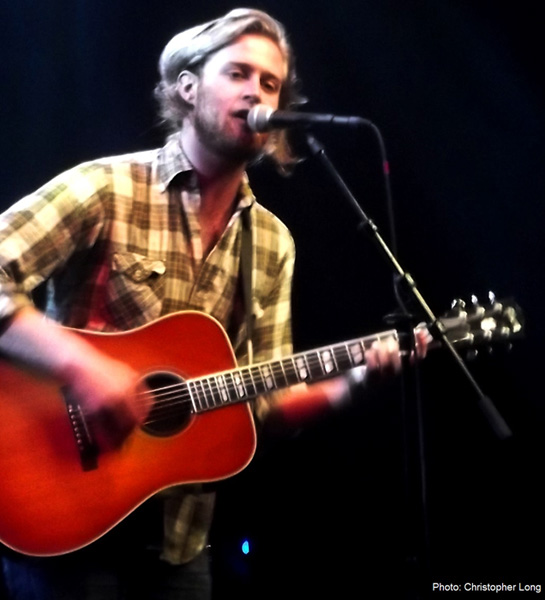 “Hey, you 30-something people,” quipped Waterparks’ Awsten Knight. An apparent snap response to the fewer than expected flocking early birds, the frontman/guitarist set the stage in short order, as his crunchy combo fired-up just after 7pm. Animated and charismatic, the blue-haired pop/rock poster boy remained the center of attention throughout the band’s spirited and sweaty set – an ankle-biting 20-minute onslaught showcasing their just-released debut record, Cluster. Commanding the stage with the confidence of lifelong rock veterans, the young and hungry, Houston-based hombres served-up such zesty appetizers as “No Capes,” “Mad All the Time” and “I’m a Natural Blue” – with Knight leading the charge, delivering clever banter and offering mad props to the other acts on the bill along the way. And the teenage girls go wild! 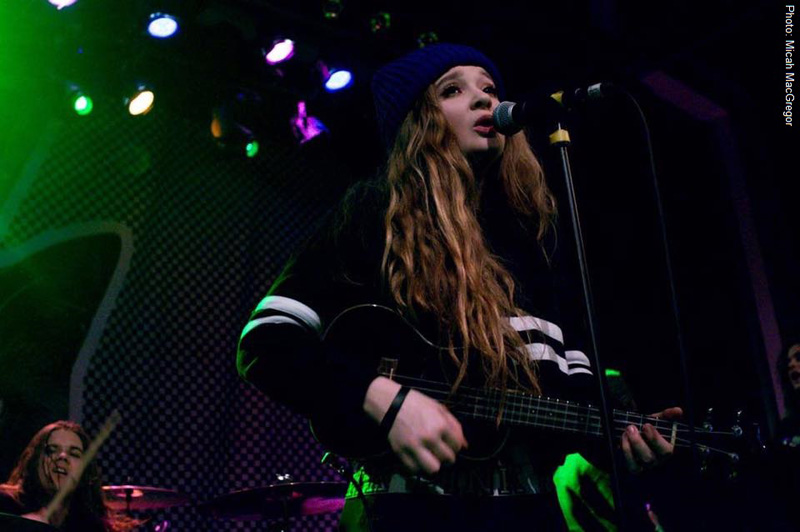 Jule Vera proved once again to be more than just a pretty face with great hair and well-crafted, cancer-curing pop songs. Touring relentlessly for the last eight months in support of their impressive 2015 debut record, Friendly Enemies, the fresh-faced, Alabama-based newcomers have earned their stripes where it counts – onstage. In fact, since first launching at last summer’s Vans Warped Tour, Jule Vera has become an increasingly more ferocious live act – a ticking time bomb, poised to explode and become the biggest band in the world, in 3-2-1… BOOM!

Possessing the voice of a God-sent angel, JV frontchick Ansley Newman captivated, and guitarist Jake Roland delighted, savagely abusing his prized vintage Gibson SG, while Kyle Horvath worked overtime, punishing various drum configurations. As for William Stacey, the 22-year-old bassist demonstrated beyond a shadow of a doubt why he’s the only worthy heir to the long-vacant rock star thrown. Even touring guitarist, Chase Haws, stepped out from the shadows to help ignite the HOB stage. Light the night, or die trying, baby! 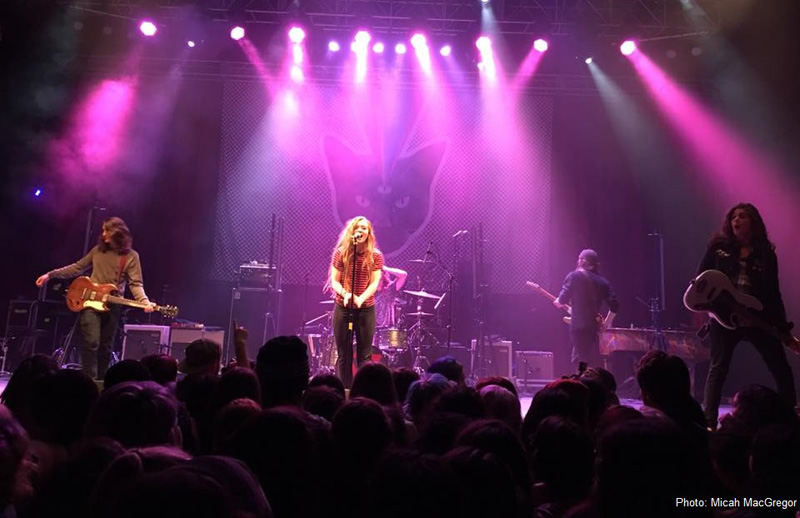 “Metro Station don’t give a fuck about no one’s opinion!” proclaimed co-founding guitar/bassist, Trace Cyrus, during his band’s high-energy, synth-pop F-bomb shower. Following the group’s successful initial run nearly a decade ago, Cyrus split from musical partner, guitarist, Mason Musso, in order to pursue other interests. However, having reunited in 2014, the duo now appear set on partying like it’s 2008, all over again. And with the two veteran frontmen overlooking the crowd from high atop individual platforms positioned across the front of the stage, and a bevy of invited babes dancing across the back of the stage, it certainly looked like a party. “Fuck technology,” Cyrus further declared, in all his sweaty, shirtless, tattoo-covered glory – “encouraging” fans to put down their precious iGadgets and to “live in the moment,” as the band ramped-up into the show-closing signature hit, “Shake It.” 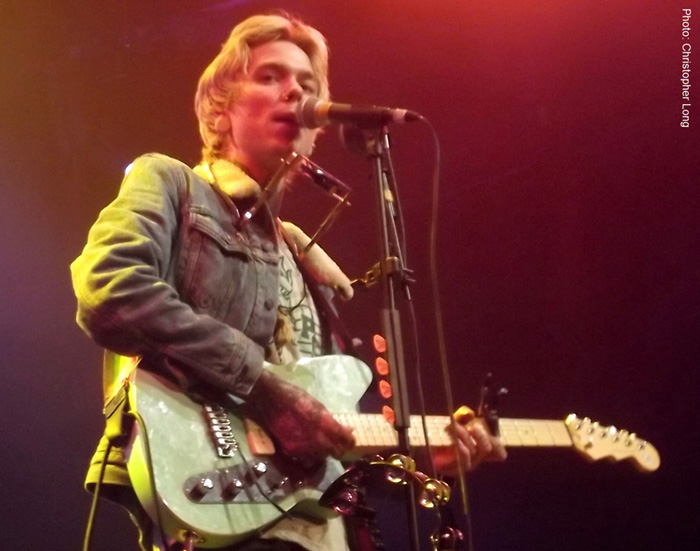 The ear-piercing screams of teenage girls were so intense and so shrill upon sighting Never Shout Never frontman, Christofer Drew, that dogs from the next county were reportedly sent into a frenzy. In fact, the power that Drew seemingly possesses over fans is so profound, I’d wager a bet that if he commanded his female followers to set themselves on fire, they’d all be diving into their purses, digging frantically for a Bic. Oh, PLEASE Ashley, you just gotta douse me in lighter fluid, ‘cuz Chris Drew said so!

Now at age 25, the one-time teenage MySpace prodigy delighted the masses with a much-loved, non-stop cavalcade of career-spanning sing-alongs, as well as choice cuts from his latest band release, Black Cat. 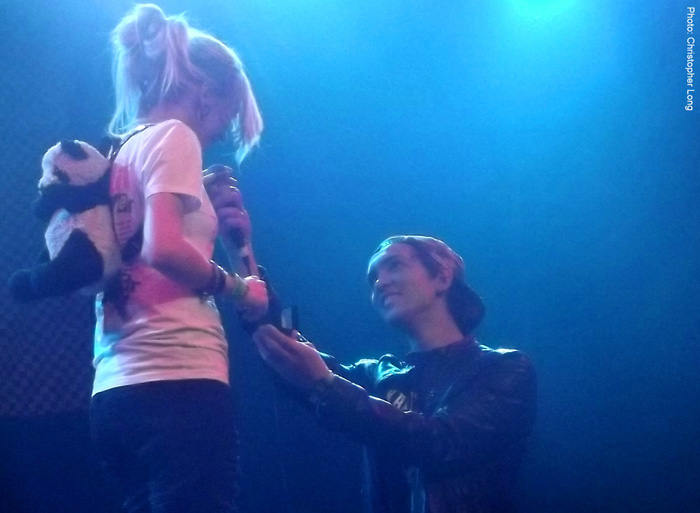 The barefoot singer/songwriter, also known (to me) as LBJ (Lil’ Butch Junior), delivered many noteworthy moments throughout the hour-long NSN performance, including a riveting remake of the White Stripes classic, “Seven Nation Army” and even a live onstage marriage proposal between an adorable young couple who I image were NSN fans – she said, “yes,” BTW. Another highlight occurred during one of the band’s newer tunes, “Red Balloon,” when Drew threw a gigantic sized red balloon into the crowd, instructing fans to not let it hit the ground. Midway through the song, hundreds more balloons were released from the HOB balcony. Fun times, for sure, and Drew & crew certainly “closed the deal” nicely. More bang for the buck, indeed. Hmm. Now where IS my Bic?