Tampa’s New World Brewery became an outpost of Frenchman Street on August 6th. Out in the courtyard, an enthusiastic crowd danced to the unique sounds of Sweet Crude, a New Orleans based indie rock band with a love for drums, their French Louisiana heritage and fashionable eyewear.

I first encountered Sweet Crude at the New Orleans Jazz and Heritage Festival in April of this year. I was impressed that Sweet Crude is not cut from the American Idol pop star pattern. The band sings in both French and English. They’re from Louisiana, but they don’t play zydeco. They don’t even have a guitar player. I talked to singers Sam Craft and Alexis Marceaux before their New World show to learn how this strange brew come together and where they hope to take their sound. 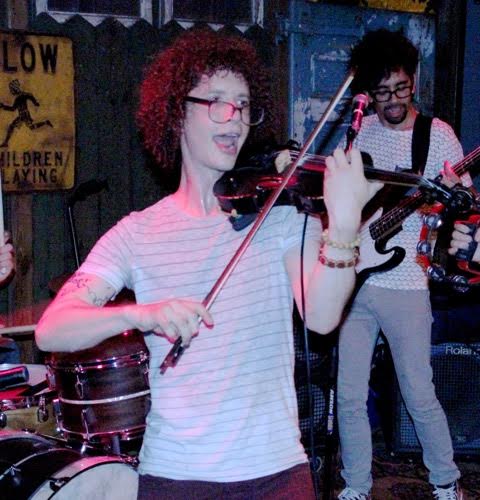 Standing on 8th Avenue in the shadow of Jose Marti Park, Sam Craft explains Sweet Crude’s origin saying, “Alexis and I had a duo, we still have a duo, called Alexis and the Samurai. We noticed in the smaller band that when we sang in French we got a good reaction. We decided, let’s go back to New Orleans, make a band with more people, sing in French, have a lot of percussion and do everything we ever wanted to do as a band, including incorporating this Louisiana element indelibly.”

“We picked people we already loved,” Alexis says picking up the story. “To get a little more historical. Both our grandparents were French speakers. That was their first language. It existed in our world, but it was a little more distant than we wanted it to be. So when we met, we wanted to learn the language, to dive into that world. When we did that, it opened this whole other thing for us. We started playing Cajun music in our duo for a reason. We were interested in what our grandparents played.”

“The language skipped our parents generation because it was banned in schools. That’s a whole other thing. It’s sort of up to our generation to preserve it. If we can do even a morsel of that…”

“If you sing in French and you’re from Louisiana, you’ve got to be Zydeco,” Sam continues. “We get over that pretty quickly. He elaborates that the band’s decision to avoid the obvious guitar/bass/drums format was as important as the decision to sing in French. “We want the sound to come from a different place. We wanted a sound that would be more ethereal, more supernatural…”

“We’ve been in bands with guitars.” Alexis says picking up the theme. “The no guitar rule exists so that we are forced and challenged to be different.”

“We think that strengthens our music because it creates a sound that cannot be identified,” Sam elaborates. “We’re not working in the framework of traditional rock and roll instruments, we have the tribal sound, everyone singing at once.” 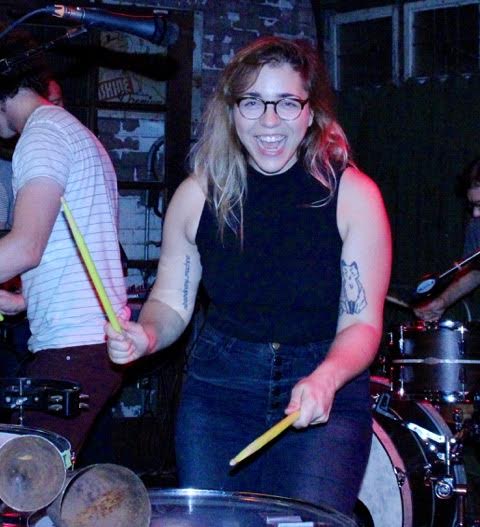 Sweet Crude take their act on the road to expose their sound to as many people as possible. I caught them on a tour of small clubs in Florida. In Orlando, they played to about a dozen people at Will’s Pub. In Tampa there may have been fifty people at the show, many who had seen them at the New Orleans Jazz Heritage Festival, the Gasparilla Music Festival or somewhere else. The band doesn’t settle for gigs within an easy drive from their home base. Earlier this year, Sweet Crude played a short tour in Canada.

“We have such a great following in Canada,” Alexis says of their jaunt north of the border. “It’s because they’re a Francophone people. Before people in our country get it, they get it. They understand it right away because a lot of people speak French. Then we get off stage and people are speaking English. That’s the cherry on top when we go somewhere were people understand both languages and embraces this new kind of music we’re trying to create.”

“I think people get it that we wave the flag of Louisiana, Sam continues talking about their reaction in other parts of the US. “We try to make the music accessible; we try to make it fun. We have a great time making it. We’re music nerds, so we put a lot of things into it. There are culture vultures who are interested in what we’re trying to do. Then there are other people who are; it doesn’t matter, you can dance to it.”

Sweet Crude are on tour supporting, Critters, a digital-only EP. They describe Critters as a tease for the full-length album, Creatures, which is due later this year. The record is done and is being shopped around to labels. If no one picks it up, they will put it out independently. “We’re hoping for the best,” Sam says. “We’re hoping to make as big a splash as possible.”

“2017 is going to be pedal to the metal touring.” Alexis affirms. “Our goal is to get into as many people’s ears as possible. Our live show is our baby. It’s what draws people in. so we will be touring a lot to support the record.” 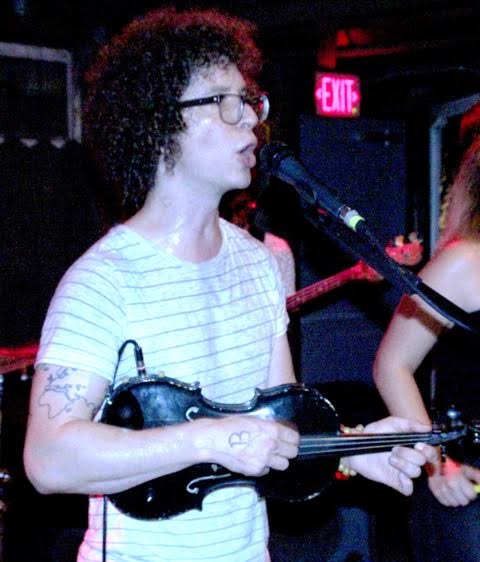 Sweet Crude’s live show is a winning proposition. At Will’s Pub in Orlando, Sweet Crude played a great show to the dozen or so people who came out on a Thursday night. It didn’t matter than more people were sitting at the back room bar than were on the dance floor, the band played with passion and commitment.

Back at New World Brewery, Sweet Crude took the passion to another level. With an enthusiastic audience in front of them, the band responded with a higher-energy performance. By the end of the set, Alexis was out in the audience singing with the fans, not just to them. This is what Sweet Crude will be bringing to the world in 2017.

“We’re trying this weird experiment singing pop music half in English, half in French, but we’re surrounded by this Anglophone world,” Sam concludes. “We’re hoping for the best.”

Baton Rouge and many other parts of Louisiana are experiencing unprecedented flooding as we go to press. On their Facebook page, Sweet Crude shared these thoughts, “There are lots of ways to help Louisiana flood victims. We would like to recommend that you make a contribution to the Greater New Orleans Foundation’s NOLA Pay it Forward Fund. The GNOF is not a huge, national organization stymied by red tape. They place resources directly where they need to go. Consider donating today: https://www.gnof.org/nolapayitforward/ “