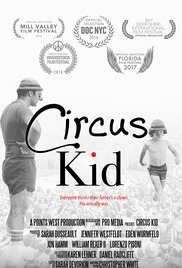 Who doesn’t love the circus? Ignore the business about the animals, and there are still plenty of wonderful circus arts to seek out. The Pickle Family Circus was the first non-animal show; it came out of the late hippie era in San Francisco in 1974 and spent a decade or so touring. Founder Bill Irwin brought a new breeze to clowning and acrobatics, and their low budget, DIY for the love of it caught on. Irwin married Peggy Pisosni and had a son Lorenzo Pisosni, and while the exact legal status is murky here, she did the books while he did the stunts. And he raised up his son to be just like him. You see where this is heading.

The family and their crew lived a gypsy life driving around, sleeping in the van, and making people smile. At first it was fun just like any adventure, but eventually it became a job where you put on a silly hat, makeup and walked a high wire every day in every town. Little Lorenzo grew older and more skilled, and when his now alcoholic dad fled he valiantly tried to keep the show alive. But he was too young, and now he’s a “legitimate” actor in New York, and his dad is fading away but still in love with his son. In this documentary we explore the family dynamics, meet the players, and basically get a boot camp in what it takes to put on a circus, technically and emotionally. Lorenzo’s stage performance of his own life is vibrant, the family story sad but not unheard of, and overall there’s a sense of nostalgia for what was and what can no longer be. It’s the whisper of a passing crowd, and the smell of days gone by.

This film was presented as part of the Florida Film Festival