I don’t think it is a bold statement to say the Japanese have made some strange movies. Jigoku, House, and Crazy Lips all hail from Japan, but Horrors of Malformed Men may out weird all of them, well maybe not House, but it is still out there. The film is certainly comparable to Alejandro Jodorowsky and Coffin Joe Jose Majica Marin’s best work. Jodorowsky is probably the closest comparison and Horrors of Deformed Men had it’s brief theatrical release in 1969 a year before El Topo and it is beyond unlikely the Chilean auteur saw this film as it was released in Japan and almost immediately pulled and forgotten. There was just something in the wind that created so much great and unique cinema throughout the world in the late 1960s though the early 1970s. If Horrors of Malformed Men had been available it would most certainly been a staple of the Midnight Movies circuit with the like of El Topo, The Holy Mountain, Freaks, and Eraserhead.

Teruo Ishii directed Horrors of Malformed Men based on the novels of Edogawa Rampo, a Japanese writer of mysteries and bizarre fiction, and plot-wise it feels like it was adapted from multiple sources. By adapting multiple stories into the single plot shatters anything approaching narrative cohesion. The effect is jarring and feels a lot like the feature length edits of movie serials from the 1940s. It also adds to the dream logic of the nightmare unfolding on screen.

The film takes place in the 1920s and opens in an insane asylum with our hero, Hirosuke, in a cell surrounded by beautiful topless women, one of whom has a knife as the women dance around Hirosuke the one with the knife stabs him and the guard who has come to remove him from the women’s cell. The knife turns out to be fake and Hirosuke is himself an inmate and we are quickly conditioned to not trust what we see, and to be ready for anything. In voice-over Hirosuke informs us that he’s looking for his home and of a memory or a dream where he sees a woman with two faces, one a beautiful woman and the other a hideous deformed man. He also sketches a bit of coastline that becomes real as we are introduced to Jogoro who rises from the crashing waves and does a disquieting dance on the rocks, his eyes and painted face staring directly into the camera.

Hirosuke soon escapes the asylum and immediately meets a beautiful circus performer who is able to give him clues about the place from his dreams he is looking for. Soon he is off and posing as a recently deceased aristocrat, Genzaburou. You see they look identical right down to the swastika shaped scar on their foot. Everyone is pleased to have Genzaburou /Hirosuke back home.

Genzaburou /Hirosuke and the household are soon on their way to the island. They are greeted by Jogoro who reveals himself as Hirosuke’s father and welcomes them. He then informs Hirosuke that he has built a paradise for him. What unfolds is an otherworldly vision of beautiful repulsion in the same vein as Freaks (1932) and The Holy Mountain (1973). The “Malformed Men” of the title and their creator Jogoro are all part of Tatsumi Hijikata’s Butoh dance company. Butoh being a dance/performance art style about the transformation of the human body into other forms. The effect is chilling and adds a poetic element to the madness of story while ramping up the surreal. The most memorable of the abominations is the revelation of the woman with two faces from Hirosuke’s dream/memory. She turns out to be a male/female conjoined twins who are attached at the back. The final act of the film really defies explanation or description and must be seen to be believed. 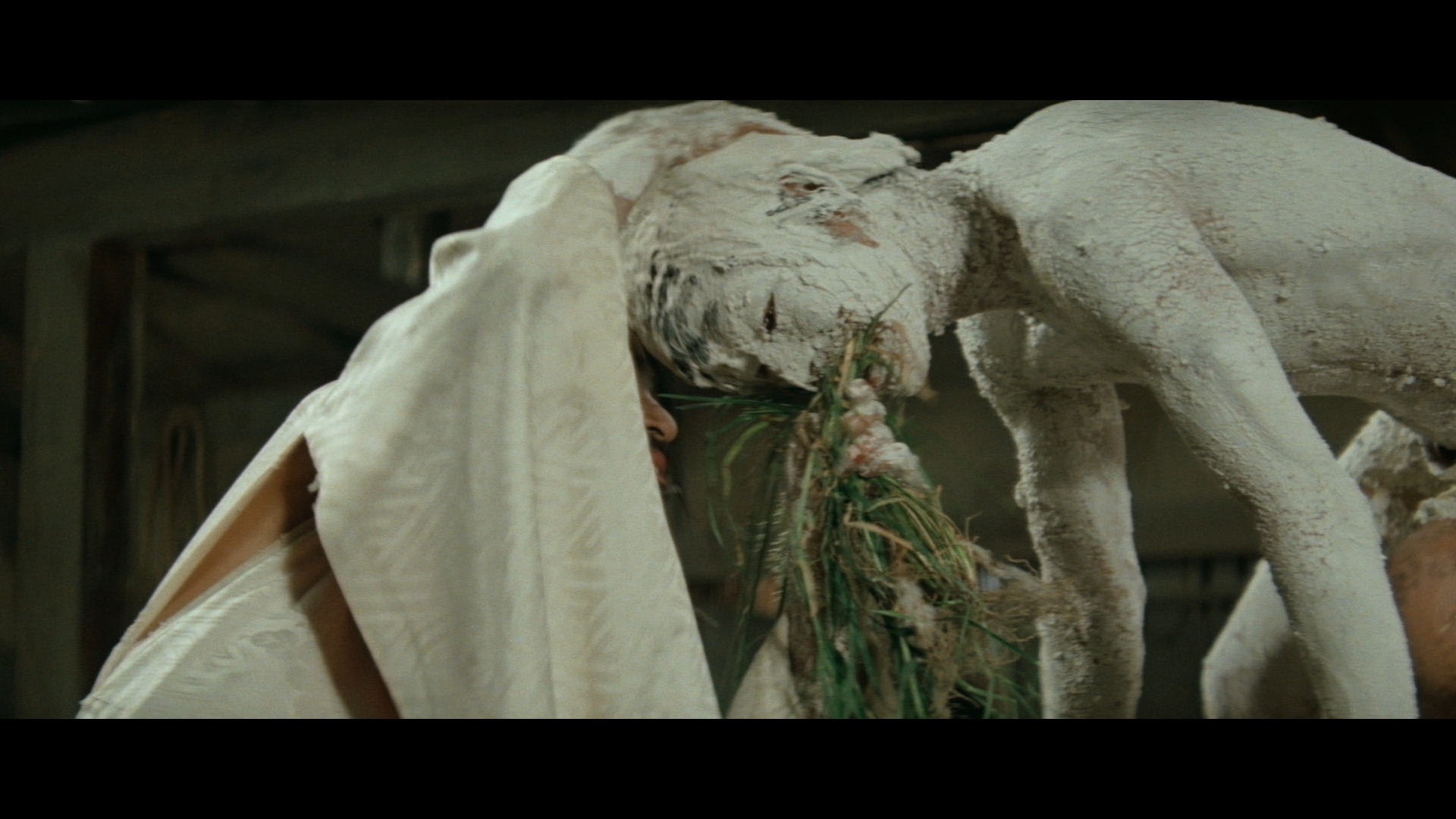 Horrors of Malformed Men was pulled from circulation shortly after its 1969 release and shuttered away by Toei Studios. The movie began its resurrection in the early 2000s and was released for the first time on video by Synapse in 2007. Arrow video has now brought the film to Blu Ray in a deluxe release featuring a great transfer and tons of extras. The gorgeous transfer is accompanied by two audio commentaries, one by Tom Mes and the other by Mark Schilling. Both are quite informative but also have a tendency to meander away from what is happening on screen often when you most want some discussion of the scene on screen. The disc also has interviews with Japanese filmmakers on the career and legacy of director Teruo Ishii.

Horrors of Malformed Men as glorious as this presentation is really feels like a missed opportunity as it practically begs to be seen as a midnight movie. The experience of seeing this with a willing but unprepared audience would add so much to its legacy that has been sadly forgotten.