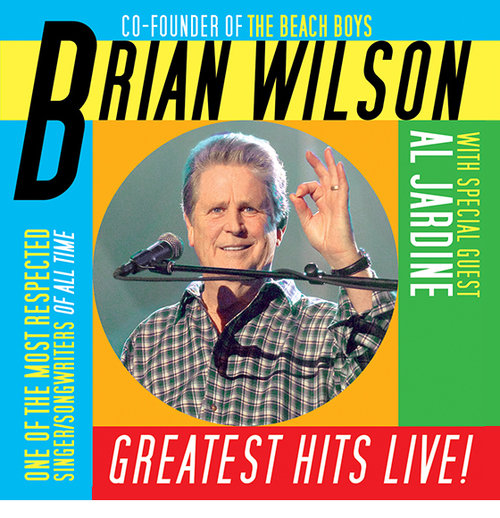 Brian Wilson is back on the road for his fall tour – Greatest Hits Live. Backed by a 10 member multi-instrumentalists band, he played the Fox Theatre to an appreciative audience. Still recovering from recent back surgery, Brian sat at a white piano while his band performed around him. It was truly a delight to hear this hit maker play the songs that made him and his family famous as The Beach Boys. The tour included special guests Al Jardine and Blondie Chaplin. They both have been touring with Brian for years, and Al is an original Beach Boy. Not sure why they were billed a “guests.” Maybe for legal reason since Mike Love still tours under The Beach Boys banner.

Beat Root Revival , an international duo opened the set with their unique songs. With an acoustic guitar and Irish bodhran the two singers played some original tunes as well as Fleetwood Mac and The Beatles. One singer acknowledged that everyone hates the opening band, but thanked the audience for allowing them to play. Between the acoustic guitars, traditional percussion, and penny whistle, I would have liked to hear more Irish tunes and less covers.

After a brief intermission, the stage was lit up revealing multilevel risers for drums, percussion, horns, guitars (4 in total), bass, keys and xylophone. 10 musicians took their places and Brian was helped onto the seat behind the piano positioned center stage. Brian and the band opened with “California Girls” then ripped through a number of Beach Boys hits such as “I Get Around” and “Surfer Girl” with Al Jardine and Brian’s son-in-law, Rob Bonfiglio, trading off lead vocals. When Brian sung, Rob took the falsetto parts. After this round of early hits, Blondie Chaplin, a Beach Boy from the ’70s, took the stage to sing a couple of later hits including “Sail On Sailor.”

What followed was a real treat for everyone in the audience. The band performed Pet Sounds in its entirety. Brian sang lead as much as he could, but at 76 and probably still feeling some back pain, it was less singing then staccato speaking of the lyrics. Hey, this man has been through a lot through his life: physical abuse, drugs, depression, now old age is catching up to him. Let’s appreciate that he loves his fans and wants to perform his seminal album live. Having 10 musicians back him up and share singing duties kept the show flowing smoothly.

The Pet Sounds album ends with a train running off to the distance and then Brian’s dogs begin barking. As the sound of train faded away, the musicians exited the stage, and people in the audience began barking!

The sax player returned to the stage and introduced the band one by one remarking that guitarist Nicky Wonder even has an amp knob named after him. Fun fact. Then Brian was once again helped to his seat as they performed “Help Me Rhonda”, “Fun, Fun, Fun” and “Barbara Ann”. The encore brought people to their feet dancing and singing along. It was fun, fun. fun.

Brian closed with a beautiful rendition of “Love and Mercy.” Yes, maybe in these times we can all do with more love and mercy. Thankfully, Brian is still around to deliver them to his fans.