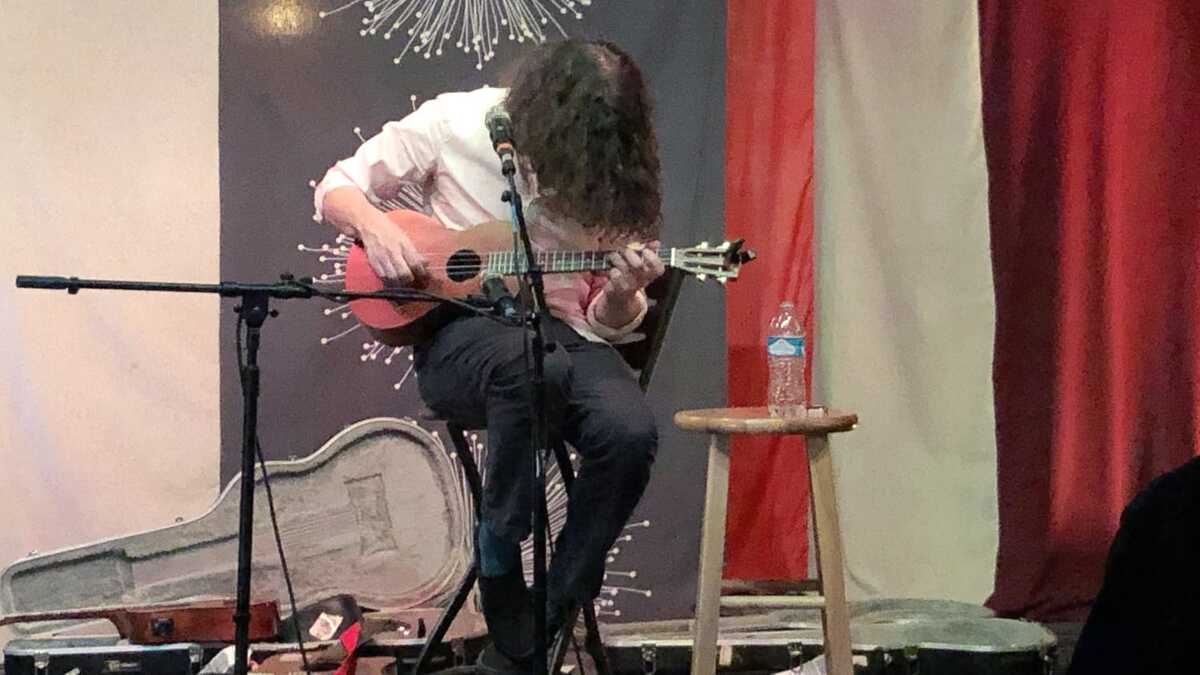 An Evening with Lou Barlow

It seems Lou Barlow was as surprised as I was to find out Lou Barlow was playing in Fruita, a small agricultural town on the trailing end of Western Colorado’s Grand Valley, literally halfway between Denver and Salt Lake City. Cavalcade is a cozy performance arts venue in downtown Fruita, the kind that offers a reasonably-priced concession stand instead of a bar. Decorated with tapestries and olde-tyme junque hanging on the walls, illuminated by a variety of light sources, and filled with a few rows of plastic folding chairs (MAXIMUM OCCUPANCY: 49 reads the placard by the exit), it has a distinct and intimate personality, and made a perfect match for the type of entertainment ahead.

As the audience filed into the room, Barlow himself was busy on the stage, doing his own roadie work. This batch of intimate shows was running fast and light, with Barlow, a guitar, and a couple baritone ukuleles on the stage and a non-performing Murph (better known for drumming for one of Barlow’s bands, Dinosaur Jr.) helping with the driving and such. Murph sat a few seats away from me, indistinguishable from the rest of the Gen X audience until called out from the stage by Barlow.

Barlow’s shaggy brown age-indeterminate look stands in stark contrast to sworn frenemy J Mascis’ white-haired immortal wizard appearance. On stage, Barlow’s face is a closely-guarded secret, hidden behind a curtain of locks as he looks down at his instrument or relates some piece of information about the song he’s about to play. If you were brought up on Addams Family reruns, you would be reminded of Cousin Itt. It’s a strange shyness that contradicts, or maybe enables, his voluble on-stage banter.

The evening promised songs spanning a 35-year career, performed without a set list and by request, and accompanied by rambling explanation, and it truly delivered. Many of the touchpoints were performed, and there were some surprising requests from the audience. Almost every song got some form of extended introduction, noting its origin, or a related anecdote, or technical notes only another musician would appreciate.

Barlow opened the evening with a cover of the Palace Brothers’ “Riding”, explaining it was a good way for him to warm up his voice as well. The audience got the full scoop on the story behind “Ballad of Day Kitty” (from his solo album Emoh) before its performance. The audience got in a good set of requests (Sebadoh’s “On Fire”, “Skull”, “Rebound”, Folk Implosion’s “Mechanical Man”, and Dinosaur Jr.’s “Back To Your Heart”) before closing the evening with “Brand New Love”. Along the way, we also got the Big Hit, “Natural One,” delivered in a satisfactory minimalist rendition, and a wonderful anecdote involving Barlow’s future wife and a Sebadoh song on a mixtape that you’ll have to ask for yourself the next time he’s near your town.

Special thanks to Blake Bickham for his help with this review ◼