The challenging of my expectations began before I even made it through security.

Waiting in line at Denver’s Oriental Theater, the patrons who had come to see Bauhaus’ uninterrupted performance of In the Flat Field lined the sidewalk. In a crowd of post-punk fans celebrating a formative album turning 40, I expected signs of tired rebellion, rehearsed apathy, and the jaded defensiveness of “I-didn’t-sell-out,-I-bought-in” ennui.

Then I heard the clanging of bells.

Two performers in lace corsets and velvet capes followed in a languid trod behind a third. All of them were dressed head to toe in black, with gowns of taffeta and silk. They rang their bells slowly, like town criers with bad news.

“This is your warning,” the lead performer called to the back of the line sharply. “The show is starting in five minutes, so get your asses inside. If you stop to get a drink, you’ll be late. Move it!” I later found out his name was Vinsantos, and the associates to his left and right were local Denver drag witches, named Heavenly Powers and Noveli respectively.

As promised, once I was ushered in with the crowd, largely adorned with studded black leather, intricate tattoos, and immaculate pointed eyeliner, opening act Vinsantos had already begun the show. Flanked by the drag witches, he played a jangly piano that recalled the ragtime of the Old West with a heavy reverb on the vocals that echoed over the crowd. It was the kind of vaudevillian performance that a seasoned performer like Peter Murphy knows will grab a crowd early. 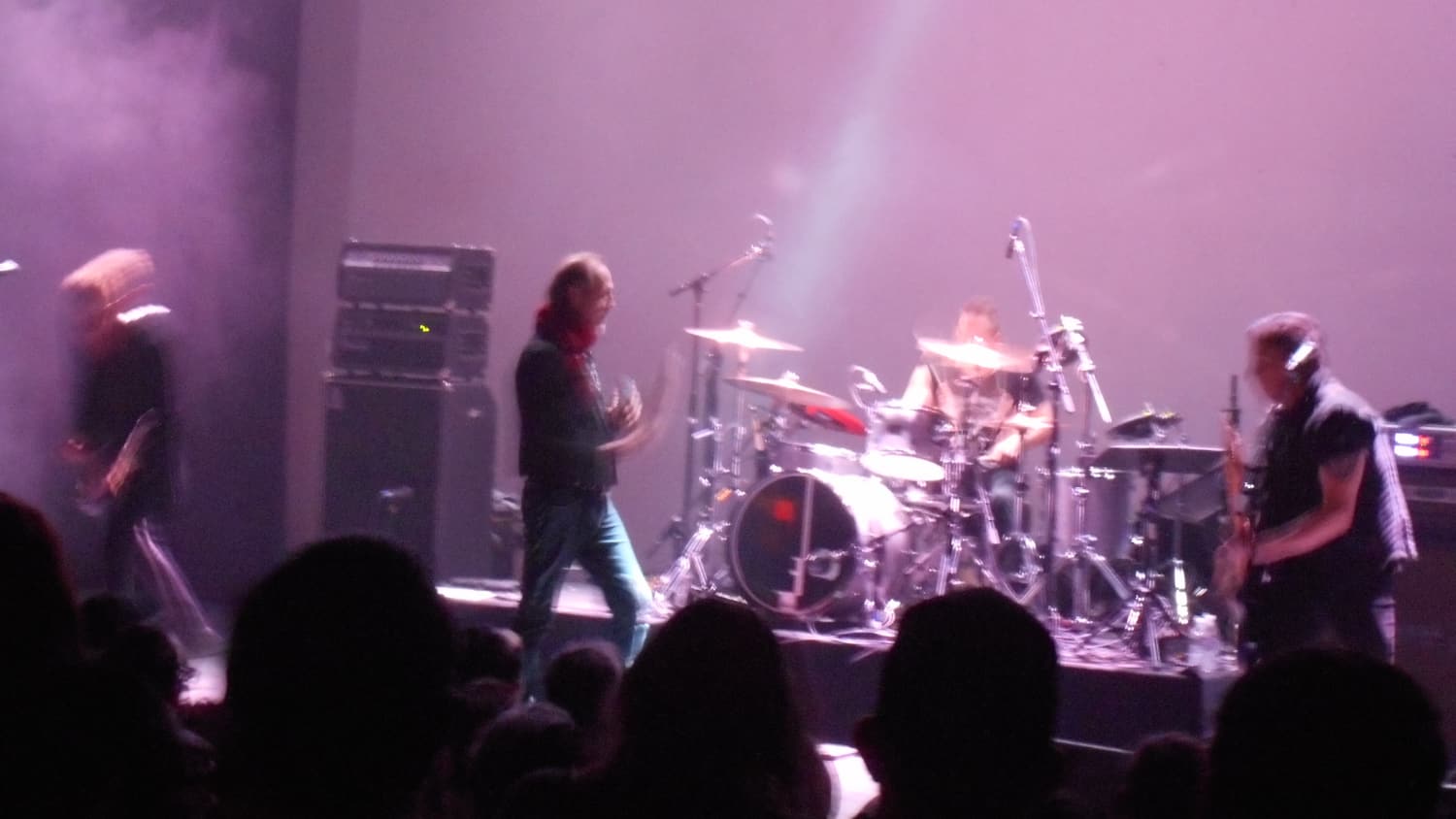 photo by Will Whalen

After handing off a rose to a favored audience member, and a heartfelt dedication to his late grandmother, Vinsantos departed, and Desert Mountain Tribe took the stage. DMT was not just a contrast, but a triangulation, another branch of the family from Bauhaus’ sound. Where the opening act showcased lyrics and performance, DMT communicated in hypnotic bass, wailing guitar, and chest-rattling drums. The unspoken message of this London-based band was “feel this.”

The long droning vocals of frontman Jonty Balls brought the group into focus, but they remained as a band outside time: elements of ’80s echoing delay, the grunge grit guitar riffs hearkening to the ’90s, and a thrumming, trance frequency of psychedelic rock revival, at once being both post-2000 and pre-1970. The sound of a well-crafted song can be identified in any era, an opinion soon capitalized upon when the Oriental Theater was commanded by Peter Murphy.

As promised, the first acidic guitar notes signaled the opening song, “Double Dare” and Murphy, reunited with Bauhaus alum David J on bass, played their formative album, In the Flat Field from beginning to end. When they reached the song “God in an Alcove,” Murphy took center stage, holding up a gold crown with both hands with the verses floating through the air “He’s a God, a God / Now I am silly, now I am silly.” The performance was delivered with trademark sardonic anger and a “you-should-have-listened-when-we-told-you-about-the-bastards-back-then” attitude, but most surprising was the energy level for Murphy during this, the 74th stop on his tour since it began in October.

Murphy’s raspy, buzzsaw bellow rolled out over the plinking synth of “Nerves,” creating an intentional unease that stilled the voices in the audience, and signaled the end of the album. The four then launched into the Bauhaus catalog with “The Sky’s Gone Out.” Murphy, supported by David J’s bass line, insisted he was going into hell again. During a searing hot drum solo by Marc Slutsky, Murphy loomed over Slutsky’s shoulder from behind the kit, melodica in hand, and with an air of glamorous foreboding. The rusty guitar buzz of Mark Gemini Thwaite cut through the thumping bass drum, and Murphy’s echoey vibrato began belting out again. The crowd knew the lyrics to “Bela Lugosi’s Dead” as “undead, undead. undead,” but with a fistful of rose petals, and a flourished toss to the crowd, the lyrics vocalized as “I’m dead, I’m dead, I’m dead,” underscoring the dirge and darkness of the message. 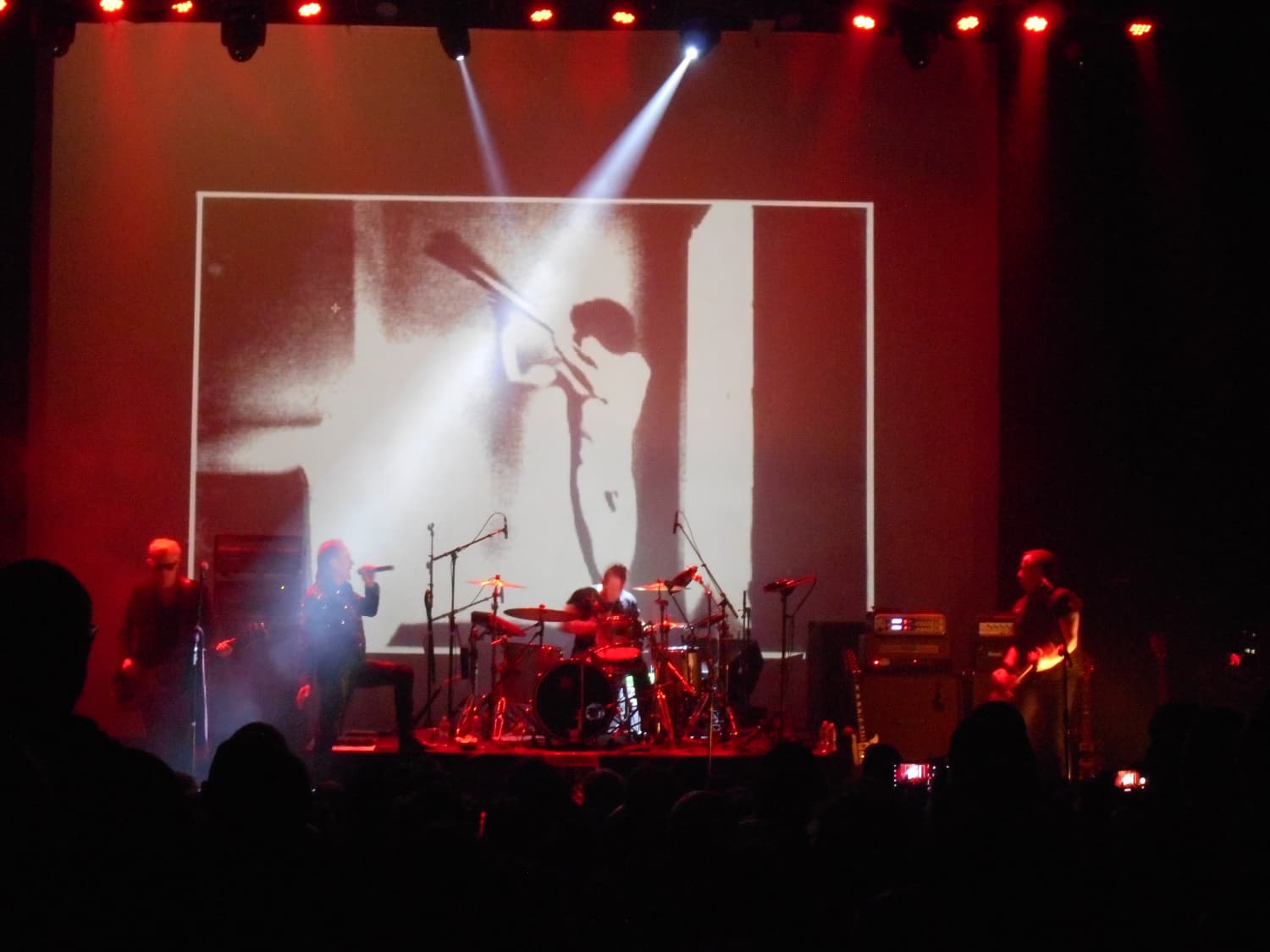 photo by Will Whalen

During “She’s in Parties,” Murphy began leading a chant to the audience, a call-and-response designed to sound vaguely like a Catholic mass in the original Latin. The spacey, plucky slices of guitar notes wrapped with the amplified melodica in Murphy’s hand like roses in barbed wire. Flowing guitar gave way to the intro for “A Passion of Lovers,” where Murphy, again behind the drum kit, began playing an electric pad. As a last promise, David J and Slutsky held a driving beat for Thwaite to careen over the top of with wailing solo riffs, and Murphy repeated the vow of Bauhaus’ hit song “Adrenalin”: that like many of the songs in the Bauhaus’ extensive catalog, they will “put you through your paces.”

The evening closed out with an encore, punctuated by a rendition of “Ziggy Stardust,” and the stage closed with David J, Marc Slutsky, and Mark Gemini Thwaite playing as Murphy made his exit.