It was the summer of 1983, and we were embarking on a road trip with my father across the American West, starting in Palo Alto, circling through Yosemite and Yellowstone before heading to Seattle and back down the coast. My father brought a cassette rack of classical music. My friend Edwin, in a life-saving feat of foresight, brought Men At Work’s latest release, Cargo, their second (they only got to put out three).

For a long time – decades – I was sick of those songs. They got played at least a couple of times a day for two weeks. They were not all great, but some were truly outstanding, including the album’s two breakout singles, the emotional “Overkill” and the lesser-known reggaefied “It’s A Mistake”. More than that, they were an appreciated pop oasis in a desert of orchestral music. Nonetheless, the initial strains of any Men At Work track (including those not on Cargo) would send me into instant boredom. Despite their status as a personal musical lifeline, Men At Work sat in my musical closet for a long time, in a box labeled “disposable MTV bands from the ’80s”. 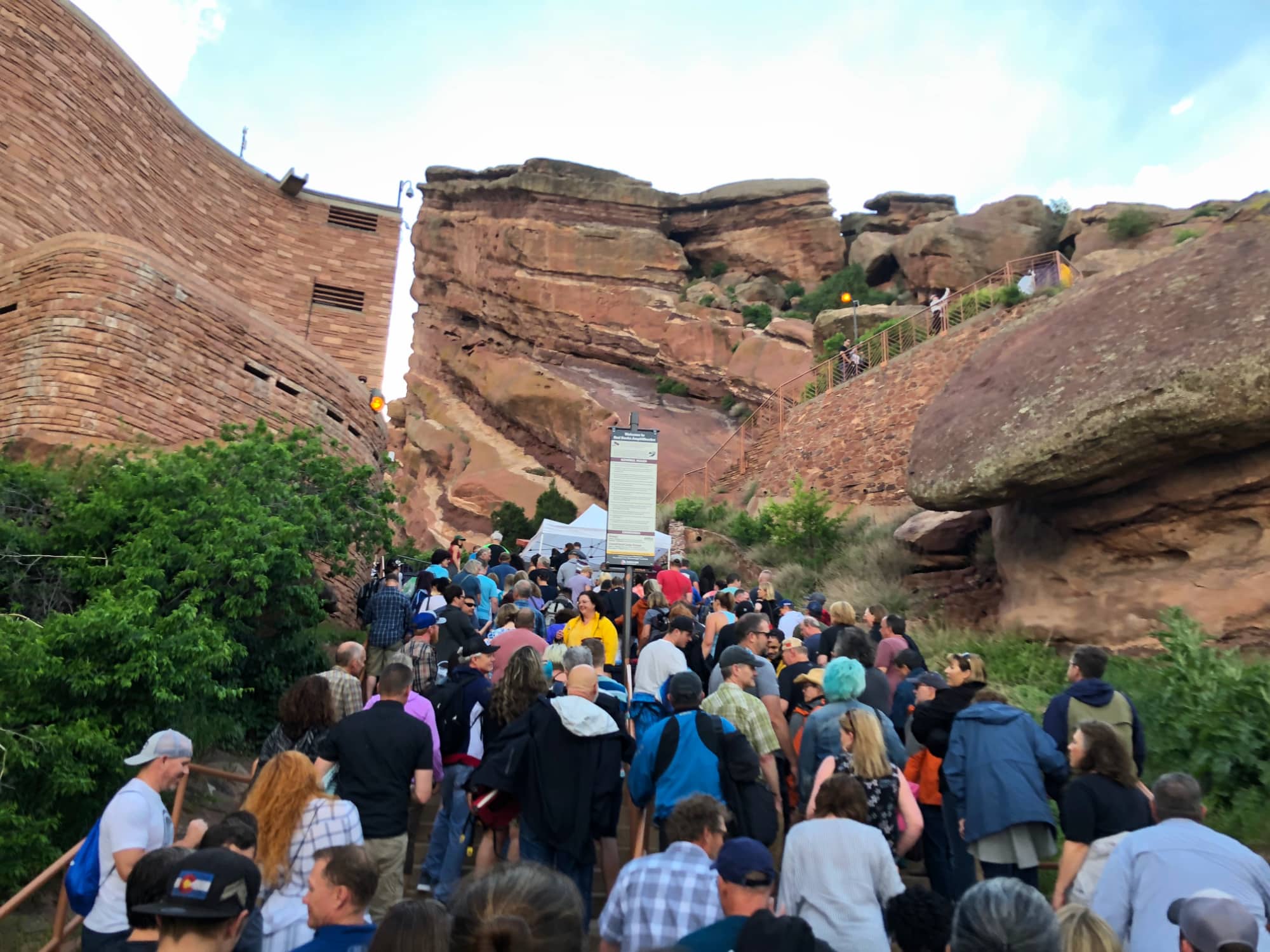 Julius C. Lacking
Your reward for an endless stair climb

It’s been a long time between then and now, and I must say my appreciation of Colin Hay, singer and songwriter for Men At Work and a solo artist of his own renown, has changed significantly in the last ten years. Men At Work may have been disposable MTV pop, an Aussie import with a saxophone player and charming videos, but many of their songs show the presence and substance of a talented songwriter.

It is now 2019, and Colin Hay is back in front of thousands, this time around opening for ’90s stalwarts Toad The Wet Sprocket and proto-jamband Big Head Todd and the Monsters. The tour has brought them to the Red Rocks Amphitheater in Colorado, a venue that always books the same opening act for every show: the Red Rocks Amphitheater. It’s only about a half hour from Denver, but it’s a fairly isolated location, with massive sedimentary formations breaking through the rolling green hills. 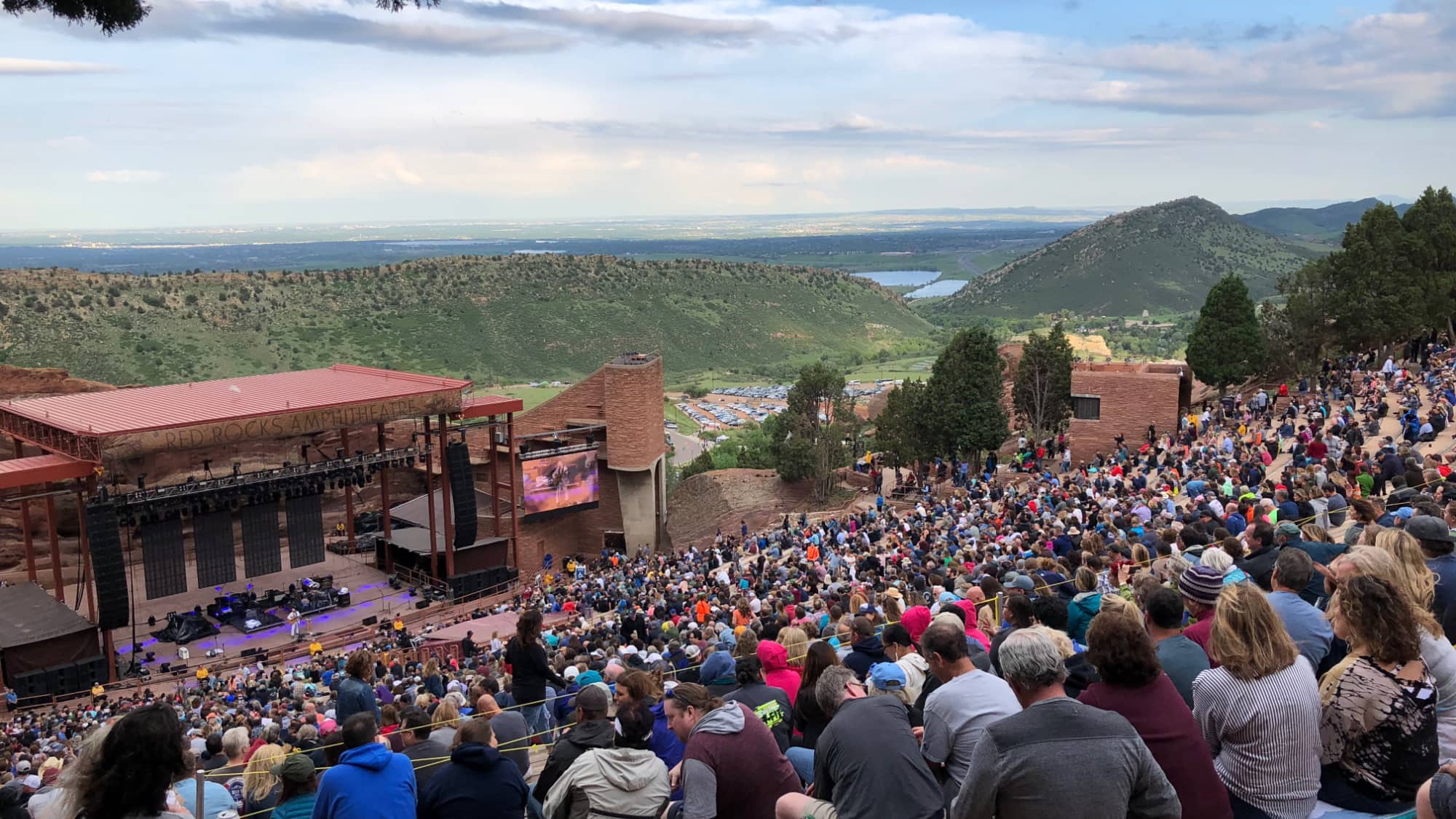 As you climb your way to your seat, you are granted an unlimited vista of the venue, the stage, and the countryside of the Front Range, sparkling blue lakes in the distance. There are massive walls of rust-colored stone on each side, channeling the sound and giving the area a sense of shelter in what would otherwise feel like an exposed mountaintop. At the bottom of the venue is an expansive stage flanked by a carefully tuned sound system and video screens that project the action to those in the higher altitudes. It’s an impressive act, and you get to catch it even if you’re running a bit late for the show.

We walked in to Hay’s performance of Men At Work’s breakout hit, “Who Can It Be Now?”. Dressed in a white suit, and with a standard-looking acoustic guitar strapped on, he had already captivated the audience filtering in. When he segued into “I Just Don’t Think I’ll Ever Get Over You”, the solo hit from the Garden State soundtrack which rekindled his career in the mid ’00s, the audience gave a roar of recognition and appreciation. 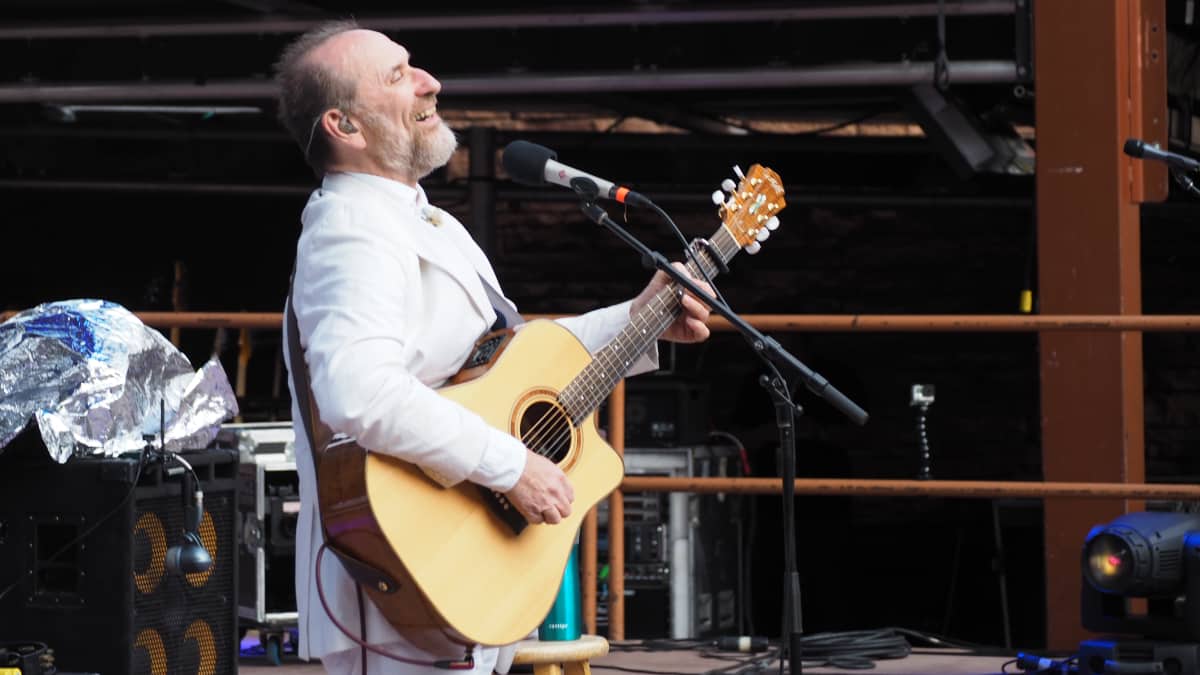 Rounding out the trifecta of greatest hits, Hay launched into “Beautiful World”, a solo track of his which is recognizable from its use in Scrubs. A meditative song about life’s simple and essential pleasures, it’s something that seems to transport Hay back into the meditative state it came from.

This was followed by “If I Had Been A Better Man”, an even more introspective number. Breaking up the somber mood, Hay talked a bit about the net effect of having a huge smash hit on the Garden State soundtrack and a revival of his career and back catalog: You get a nice chunk of money… “not move to the Bahamas and retire type of money, more like remodel your kitchen with nice countertops money.”

The irony of Men At Work is that despite their bouncy nature, their hits were topically very sombre affairs. Three of them dealt with paranoia, ADHD, and anxiety, a fourth with the isolation borne of stereotypes, and the fifth with nuclear Armageddon. Hay chose to play “Overkill” next, a song that takes “I can’t get to sleep,” an opening line appropriate for 62% of all the songs ever written, and makes it his own. The song’s stratospheric saxophone solo was given a pretty decent transformation on the acoustic guitar.

As he got ready to close his set, Hay asked the audience to “make it a big night,” before running right into “Down Under”, arguably Men At Work’s most recognizable hit, responsible for introducing the concepts “chunder” and “Vegemite” to bored teens across America. Colin Hay is a transplant twice over, first from Scotland to Australia, and later from Australia to Los Angeles, so a song about being pigeonholed and stereotyped seemed like a fitting end for the set. 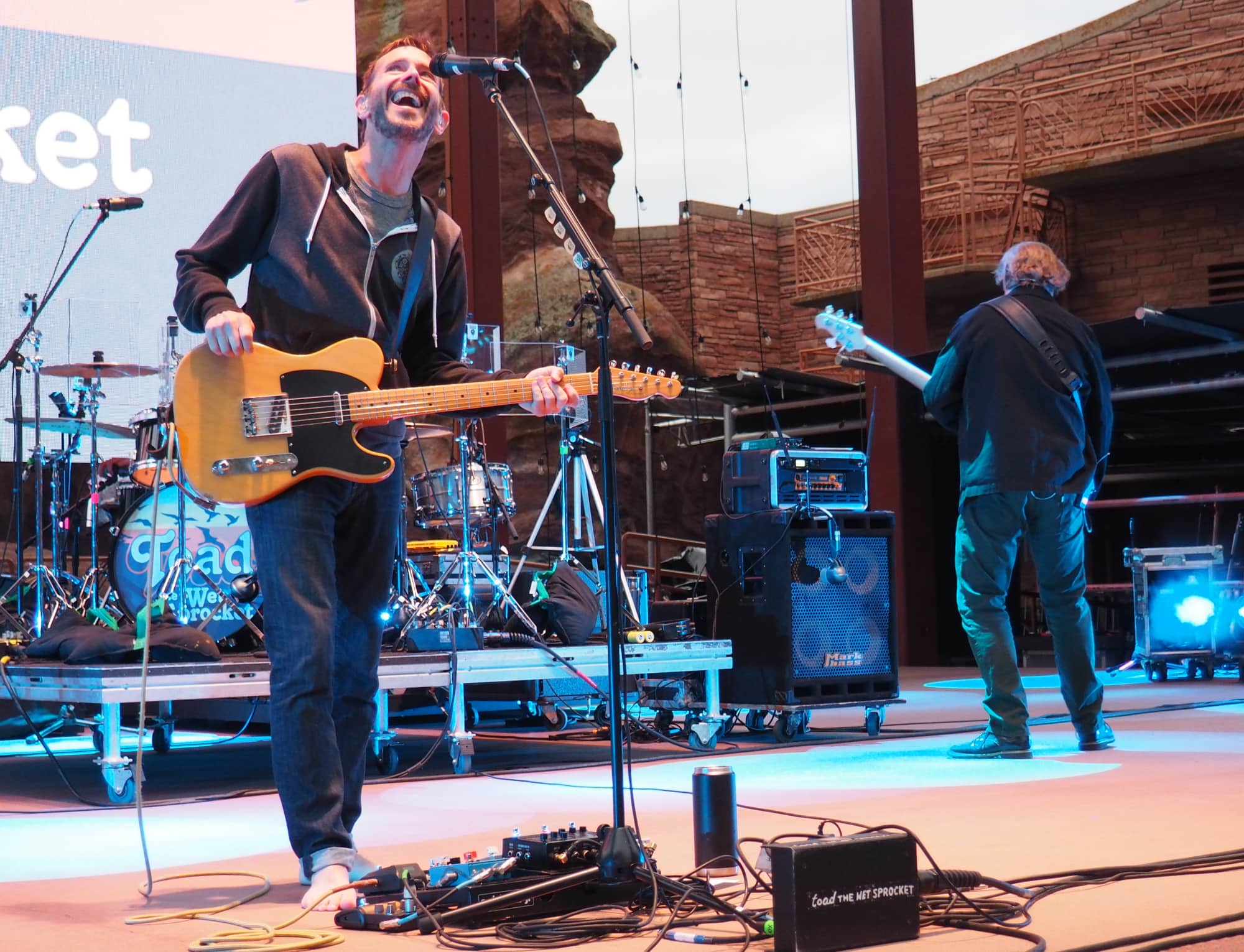 Toad The Wet Sprocket were on next. I am not familiar with their catalog, as it wasn’t my cup of tea the first time around, so I failed to recognize their opening track, but their mega hit “Feel The Same” was on second. Halfway through their set, vocalist Glen Phillips remarked that their first concert was Men At Work and Mental As Anything in Santa Barbara. The band closed out by declaring their performance at Red Rocks a real bucket list item, and easily getting the audience to sing along with another of their charting hits, “Walk On The Ocean” . They put in a solid show, and I can truly appreciate guitarist Todd Nichols’ love of offset telecasters. 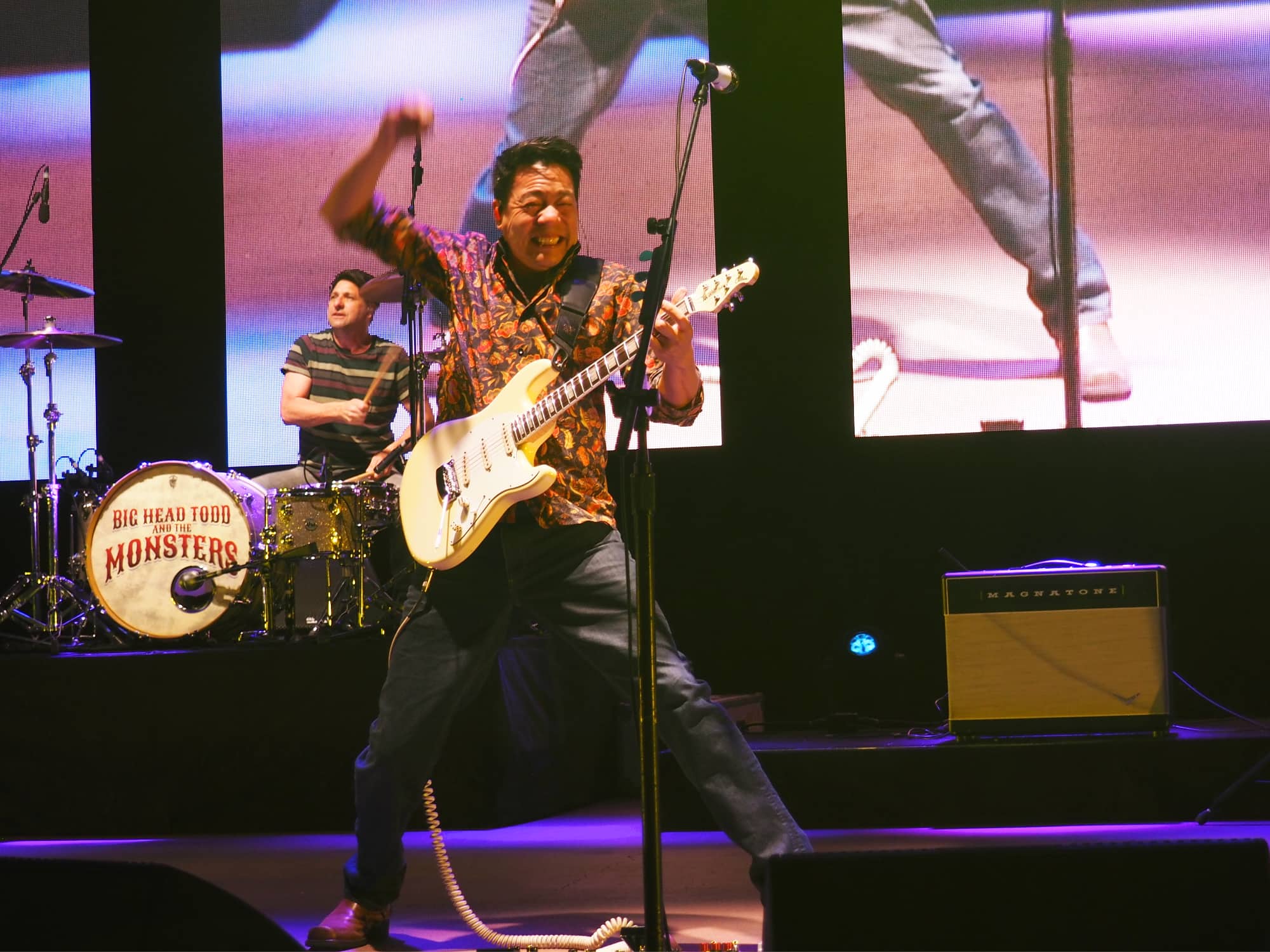 The last time I saw Big Head Todd and the Monsters was in a basement club in the University of Texas at Austin’s student union building in 1991. At the time, they were known for taking a page out of the relentless DIY touring playbook, but they were not at all a punk or hardcore band. This formula for establishing grassroots support was later used by many other acts to establish highly successful touring circuits, but these Denver natives were among the first, and this was their homecoming concert for an ecstatic and well-practiced audience.

The band opened with Elton John’s “Saturday Night”, but my knowledge of their catalog is pretty limited. I’ll just say the band worked the crowd with the expertise born of three decades of working crowds. We excused ourselves early, making our way to our car so we could drive through the dark winding hills of Morrison towards the bright flatland tangle of Denver’s sprawl, listening to Colin Hay in our heads and avoiding the closing act that Red Rocks books for every show, the Parkinglot Scramble.