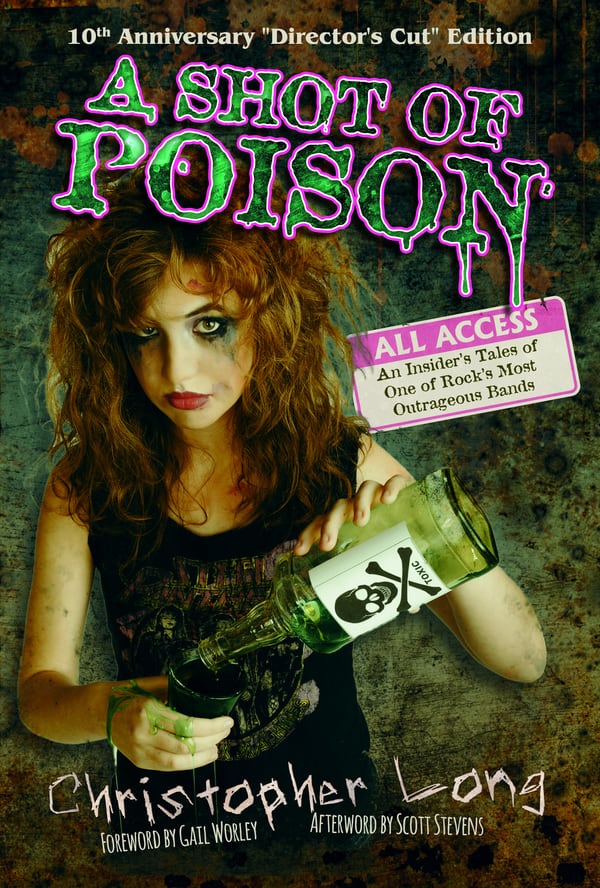 Like the beatniks and the hippies and the disco dancers before them, the hair metal people are their own distinctive stereotype, emblematic of not only a popular music but of an entire era. The trope of hedonistic, nihilistic, competitive-partying musicians drifting through an endless sea of freely-available sex and dope, disconnected from reality inside a tourbus bubble, is something that still carries on today, but nobody can claim it like these bands from the mid to late ‘80s. If you were there, you know the legends are true.

Fast forward a couple of decades to 2006. Nostalgia is a powerful and cash-producing force, and the members of Poison, one of the more recognizable names in the genre, have resolved their significant but unremarkable differences to embark on a nationwide summer tour. Christopher Long, our author, lands a spot as bassist Bobby Dall’s personal assistant on this enterprise, and through his telling we are surprised to learn that these former bad boys are well into adulthood and they have outgrown their youthful vices, their hard-earned experience grizzling them somewhat but also adding an extra measure of wisdom in return.

No, we’re not surprised to learn that, because that’s not what happens. The members of Poison, and members of related bands that wander in and out of the tour life and the author’s narrative, are insatiably self-centered, with the emotional maturity of thwarted toddlers and the absolute authority of emperors. I understand that these are average humans in not-average situations, people who at their core are not that different from your friends and mine but who are now in a reality-warping personal theme park that brings out their worst. Still, an explanation is not an excuse, and along with the harmless fun, Long documents plenty of frankly inexcusable incidents.

The structure of A Shot of Poison is chronological, presented as a series of short vignettes from that tour and a couple of subsequent ones, ending with a gallery of photos from the experience and (in this new expanded edition) an afterword with thoughts and related materials written after the original publication of the book 10 years ago. It’s a fast and fascinating read, and in contrast to the outrageous subject matter, the author is light on hyperbole and emotional adjectives. In a way, its clinical style reads almost like an affidavit, laying out the facts and reserving judgment in order for the reader to make their own.

This is the point in the review where I disclose that Christopher Long, author of this book, also contributes to this publication, but I’ll go further by admitting I have known him personally for some time now, and even before then, as the brash longhair behind the counter at my sleepy college town’s independent record store. I can attest that he has a rock and roll resume longer than a CVS receipt. As he makes clear in this book, the road of true rock ’n’ roll quickly narrows and grows steep as you grow older and more famous, and sooner or later it comes to a fork. In the time since A Shot of Poison was published (a year or so after Long’s final tour stint), the author became a man guided by faith, publishing books (fictional and not) with a strong Christian theme. The preface alludes to the influence these events had on the person the author is today, but I have no doubt witnessing what he did had a profound effect.

If you were expecting something like “The Dirt but about Poison”, I’m sure you will be disappointed. I’ll admit The Dirt was a fascinating read, a real page-turner, but it also contained a hefty amount of (to use the technical term) bullshit. It was the story some jerk tells at the bar for as long as people are buying them drinks. A Shot of Poison is more like the confession a close friend makes after a long silence has passed. Twenty years on, a lot of the drugs in the classic sex-drugs-and-rock-and-roll formula come with a prescription, but the tale is no less sordid.