An eye-opening “man on the street” segment aired recently on the top-rated late night talk show, Gutfeld! It featured interview snippets from a cast of enlightened college students all articulating how they each were ashamed of and embarrassed by America. Wait? What? Could these fresh-faced individuals actually be speaking for the nation’s entire youth culture? Hmm. I had to find out for myself. So, off I went in search of the answer. My destination: Tampa, Florida. My mission: take in the Turning Point USA annual Student Action Summit (SAS). My challenge: deliver a solid story through recounting my findings in a crisp and concise yet thorough report. Although it would mean missing my 40-year high school reunion, I accepted the challenge.

Stepping through the shiny, steel-trimmed glass doors into the enormous convention center lobby was like walking into an international airport terminal during the height of the Christmas crunch—an endless parade of beautiful young people bouncing about, many pushing or pulling rolling luggage, as they lined up at the check-in counters. It also was a crash course in savvy marketing and branding, with the entire venue being transformed into a gigantic SAS shrine. In fact, you couldn’t shake a donkey’s privates in any direction without it smacking into some type of logo for Turning Point or its media love partner, FOX Nation. 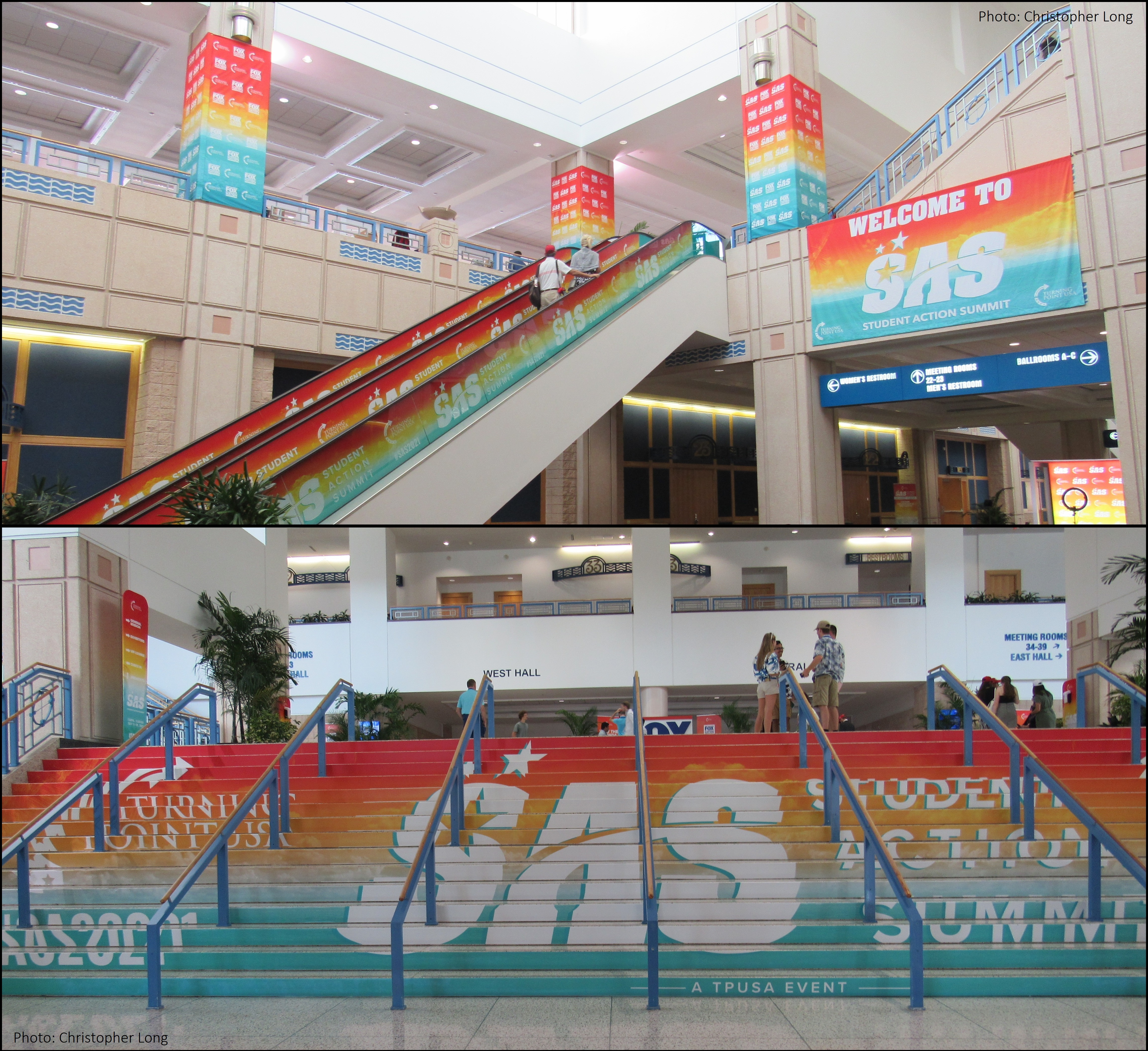 Christopher Long
The Tampa Convention Center was transformed into a SAS shrine.

Possessing the passion of the Vans Warped Tour (without the soul-crushing preachers) while oozing the energy of the WWE (without the back-breaking pile drivers), SAS 2021 promised to be a super-charged event geared directly to today’s tuned-in college crowd. Converging on the Tampa Convention Center, thousands traveled far and wide, from coast to coast to attend the massive conservative pep rally that ran from July 17 through 20.

The mega event boasted a state-of-the-art, Gaga-caliber production in the 3,000 capacity main West Hall auditorium. Focusing on today’s most feared F-bombs—faith, family and freedom—the four-day festival featured a slew of the hottest speakers on today’s conservative scene. Dude, wasn’t that the chick from FOX?

But, as I discovered in very short order, the real story I was seeking would not be about the superstar guest speakers, the high-energy DJ, the informative exhibitor hall, the swanky VIP lounge, or the related smaller room breakout sessions and workshops. This event was about people—young people and their personal stories, from the passionate young man draped in a Cuban flag discussing Cuban-related issues with a group of friends in the convention center coffee shop, to the three fabulous-looking sisters from south Florida wearing matching red “Keep America Great” cowboy hats, to the two guys hanging out in the back of the exhibitor hall debating their opposing religious doctrine.

Turning Point USA founder, radio host, and all ‘round conservative guru Charlie Kirk kicked off the festivities with an inspirational opening speech late on Saturday afternoon. “If you’ve been looking for hope, you’ll see it here in Tampa, Florida,” Kirk announced to the enthusiastic faithful flock. “The millennial generation, the ‘Z’ generation can be known as the generation that surprised and shocked the world—that rose up in record numbers and fixed the problems of generations prior.” 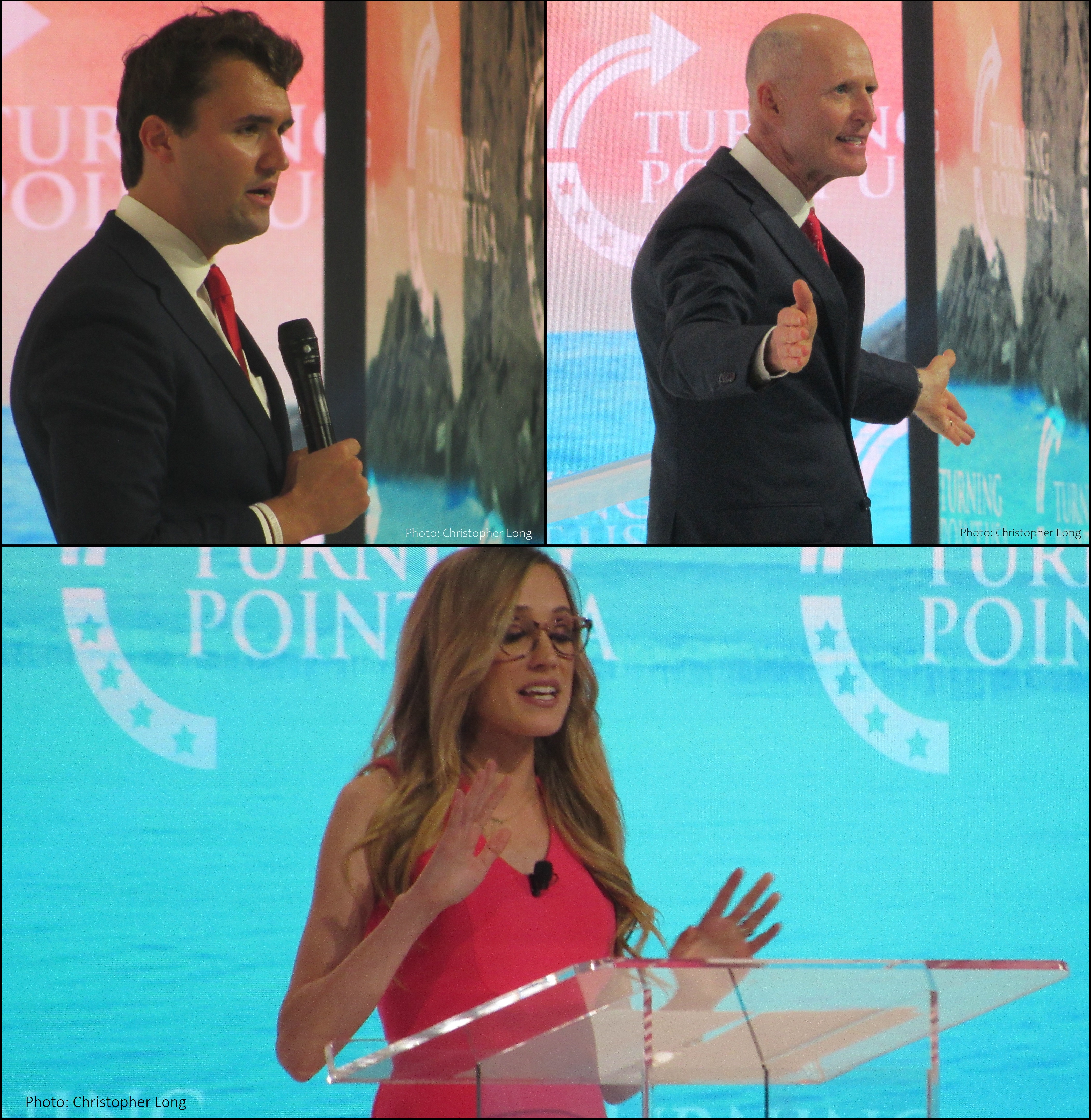 Surprisingly (to some), the SAS attendees were NOT mullet-headed Neanderthals sucking down suds from red solo cups—nor did I notice any of them driving 4x4s with Confederate flag license plates. The popular perception that conservatives are homophobic bigots and buffoons just didn’t prove true. In fact, I engaged with more gay peeps at SAS than that time I DJ’d Robert and Michael’s wedding reception back in 2018.

Christopher Long
SAS 2021 was about young people and their personal stories.

Also, for those who love wielding the (now) tired “R” word with reckless abandon, it’s worth noting I hung out with more folks of color at SAS than that time I went to the Shalamar / Lakeside concert in ‘81—a point not missed by speaker Brandon Tatum. “We do NOT live in a racist country,” the conservative African-American commentator and former police officer proclaimed from the podium with great conviction. And for those who fear a 2024 presidential run by that “last guy,” don’t be so sure that’s a done deal. The response from the SAS crowd when Florida governor Ron DeSantis hit the stage was more intense than 3,000 13-year-olds at a Bieber after-show soiree. 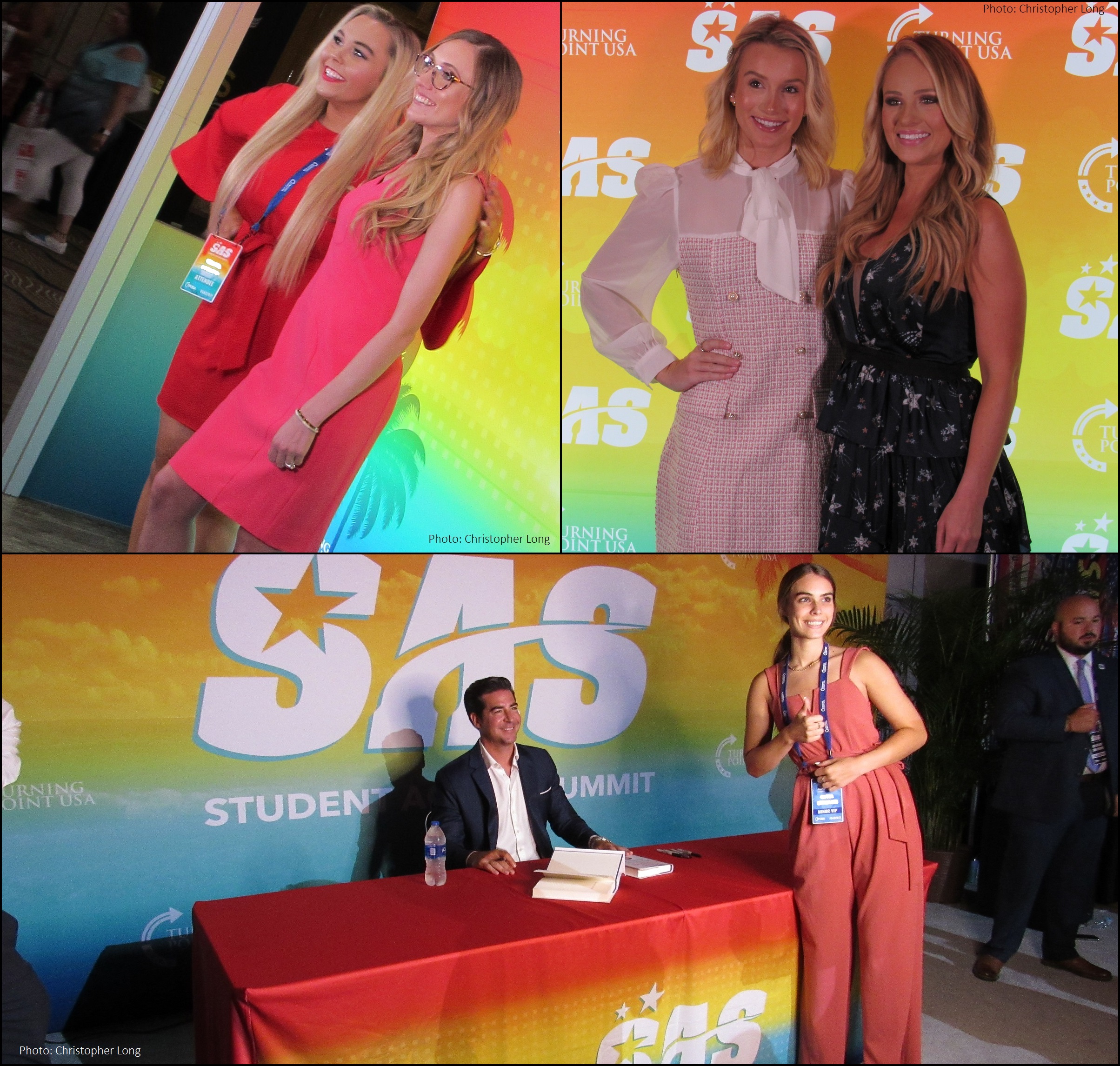 Arguably the most powerful presentation of the weekend came from conservative multi media commentator, Tomi Lahren. If I ever find myself in a barroom brawl, I want Lahren on MY side. The most moving commentary was offered by Dr. Ben Carson. “We are a good nation full of good people,” stated the celebrated neurosurgeon and former HUD Secretary. “Don’t let anyone tell you otherwise,” he added. 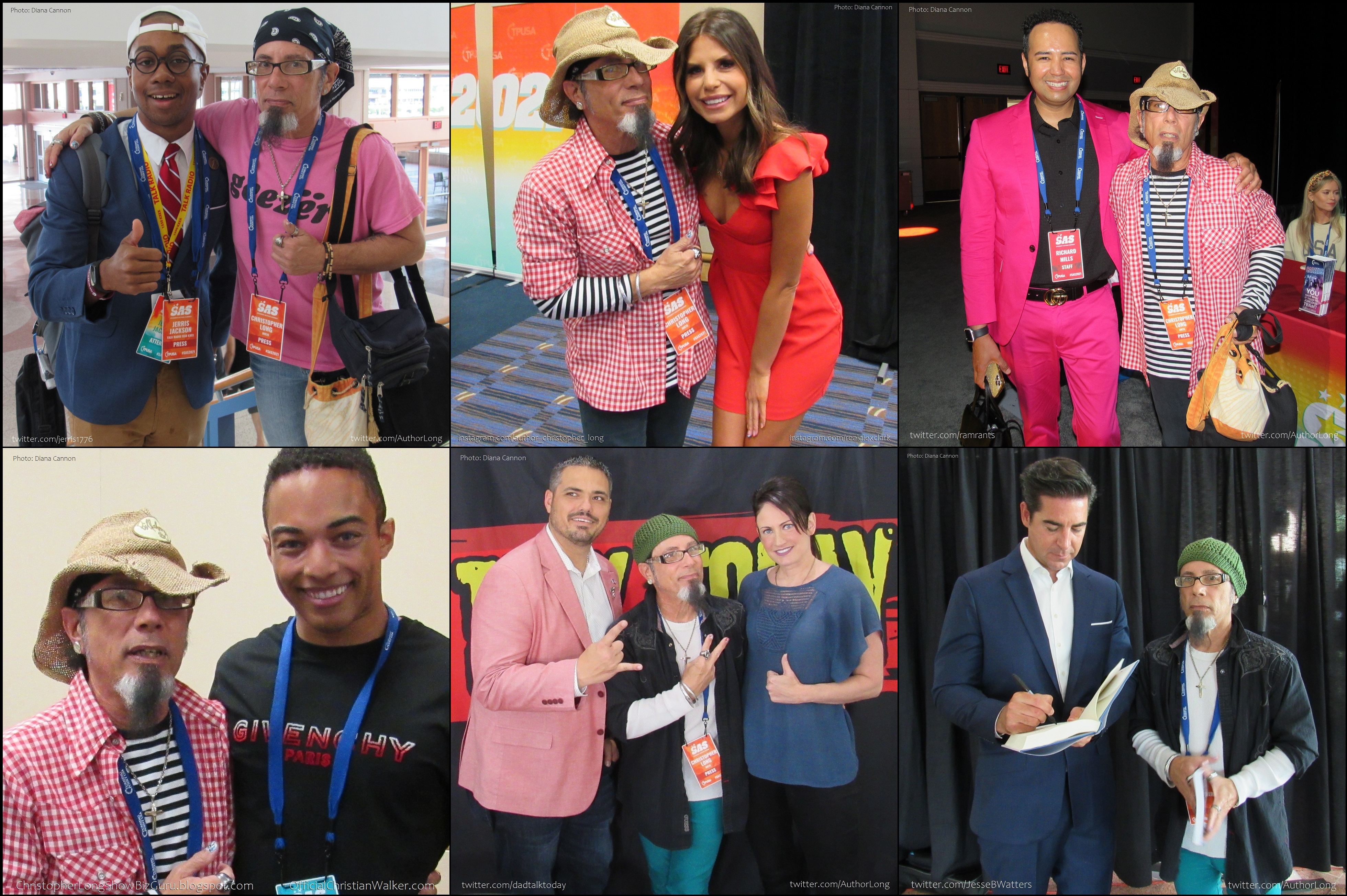 I connected one-on-one with many prominent politicians and media personalities at SAS. FOX News “golden boy” and current bestselling author of How I Saved the World, Jesse Watters was a champ, as was FOX News libertarian princess, Kat Timpf. Arizona congressmen Andy Biggs and Florida state representative Byron Donalds also were a couple of straight-up dudes. In fact, only one well-known legislator refused to engage with me. Honestly, I found her fearful reaction to me to be more hilarious than insulting. And all along, I thought everybody from Colorado was cool. I stand corrected. As for Jesse Watters, during our interview, he offered a couple of slices of personal advice to the SAS audience. “Work hard,” he said. Regarding achieving success in one’s desired field he added, “Do what you’re told.” 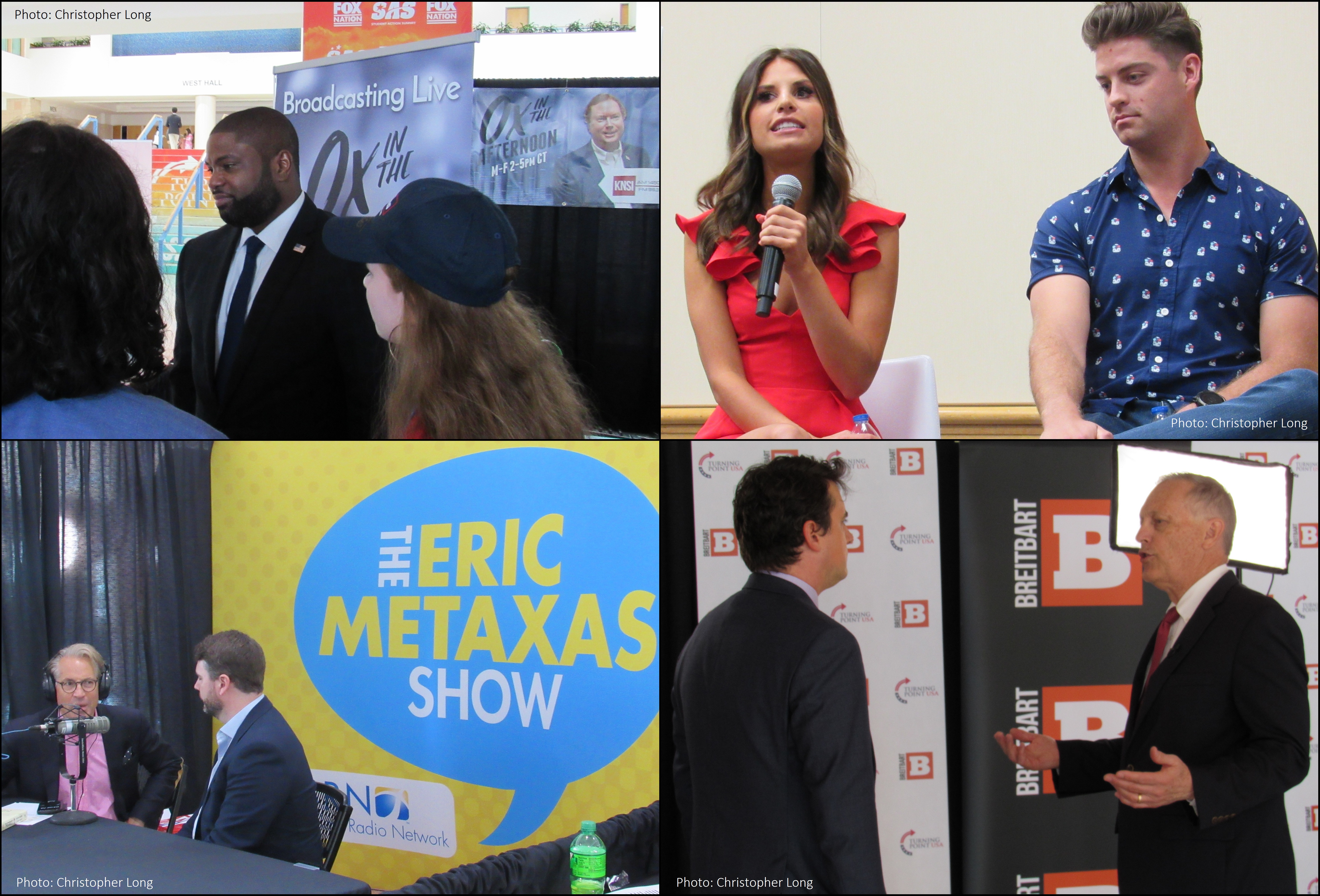 Oh sure, power players were plentiful. However, one fella proved particularly impressive. Ever heard of Charles Tippett? I hadn’t either. But he became my personal MVP of SAS. As a decrepit little old man, I now struggle frequently to pull off even life’s most menial tasks, including (apparently) controlling my shaking hands, especially while trying to steady a camera, first thing in the morning. Seated in the front row of the West Hall, Charles noticed my pathetic dilemma. Snatching up my camera posthaste, he got some “must get” shots of Monday’s marquee speakers. Many of his pics are featured and credited in this piece. If I ever run into Charles Tippett again, I owe him a bear hug and a bag of Skittles. 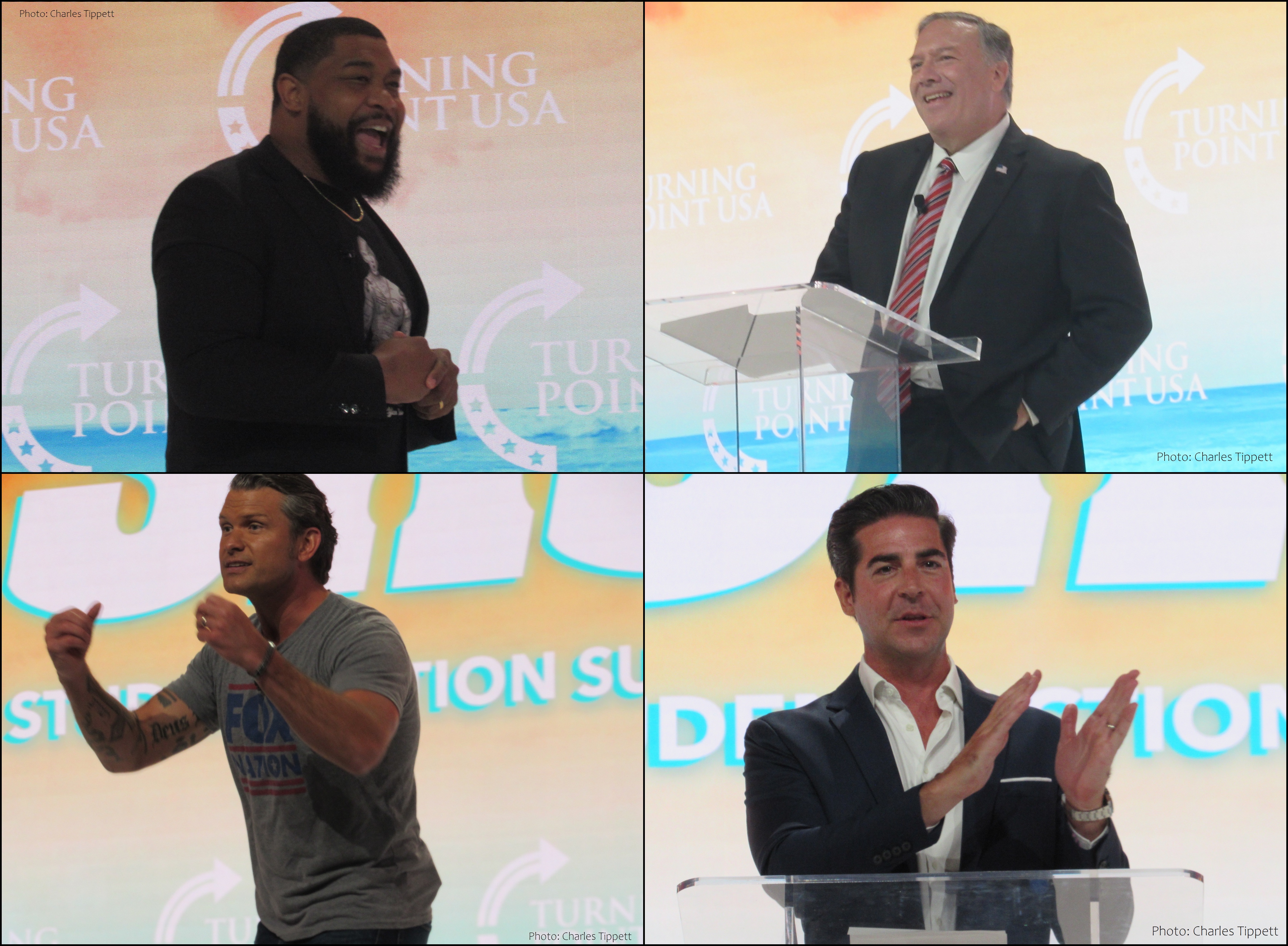 And then there was Ava, a young woman who was accompanied by her grandmother (who was younger than me). Truly awesome, Ava seemingly knew more about the current political landscape than even former Secretary of State Mike Pompeo, who also spoke at SAS. Noticing her amazing fashion sense that included an absolutely marvelous pair of blue suede boots accented by silver stars, I had to approach the 15-year-old for an impromptu interview—a lively conversation in which she told me how she first visited Capitol Hill at age eight and already had attended a Mike Pence speaking engagement. As a result, her revealed future plan to run for political office came as no surprise.

While interviewing various attendees throughout the weekend, I conducted an informal poll in which I asked each young person who their favorite FOX News personality was. Unanimously, much to the likely chagrin of the FBI, they ALL said, Tucker Carlson, who was NOT at SAS. 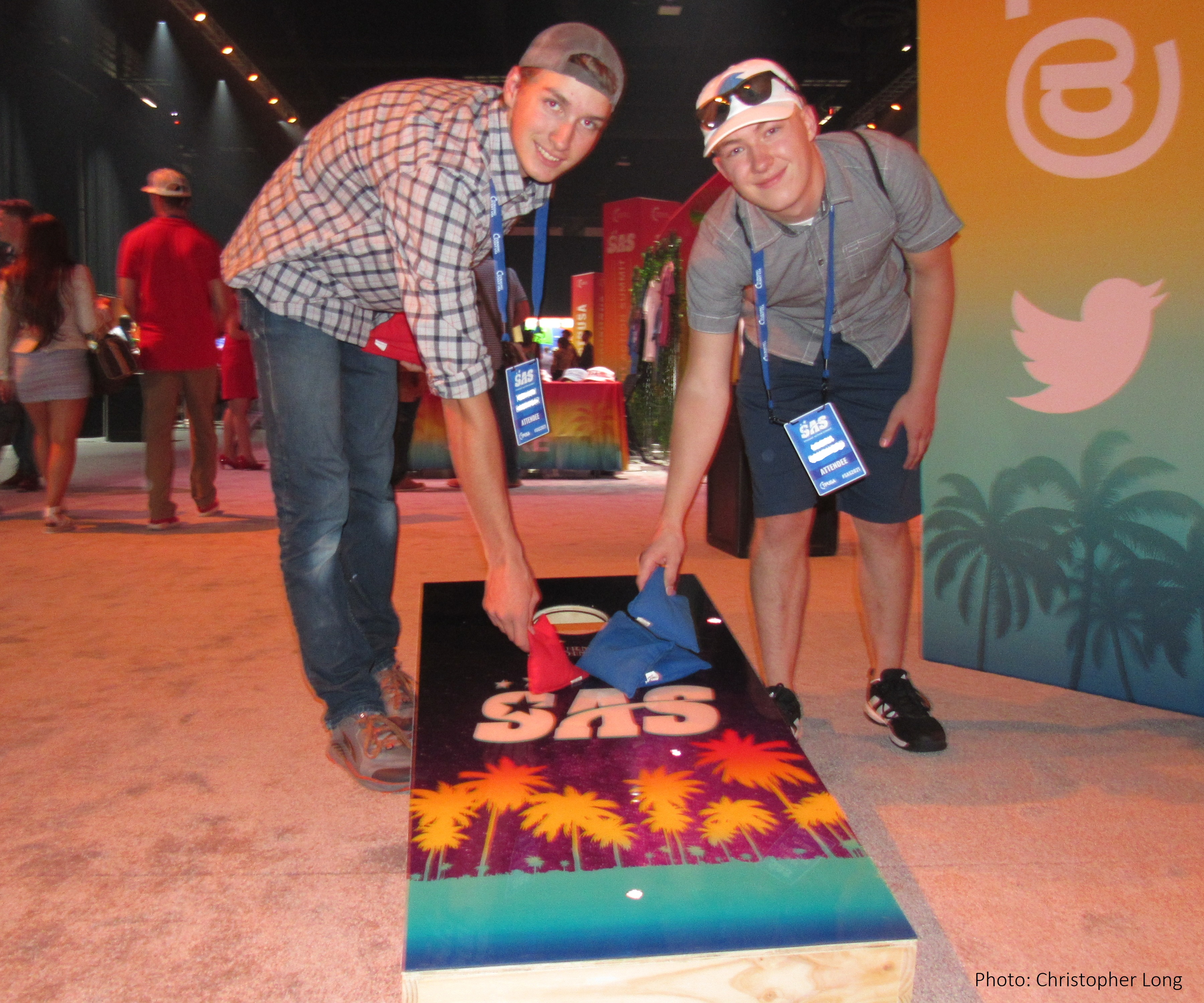 Christopher Long
There never was a dull moment at Exhibitor Hall.

But I was in pursuit of a definitive answer to a specific question. Is America’s youth culture actually repulsed by America? Well, you certainly wouldn’t have found that sentiment anywhere at SAS. Attendees all were conscientious young people who clearly LOVE America, warts and all. They love and value their freedom—the freedom to pray and the freedom to carry. They understand the importance of secure borders and they crave capitalism. God bless ‘em! They also want less government, and they demand that said government stay the hell out of their bedrooms, doctors’ offices, and after-hours parties (especially while in Tampa).

In sum, SAS was a sensory overload scene, and it took me a few days to decompress and process the experience. My takeaway: not all of today’s young Americans despise their country. The students I encountered weren’t dangerous radicals. They weren’t criminal extremists. And they weren’t wacko insurgents. They merely were passionate patriots—fired-up and just a lil’ bit “SASsy.”