Who the ‘F’ Is Jenny Lewis?

Who the ‘F’ Is Jenny Lewis?

Truth be told, I had to suppress a snicker as she tried to blend in, hoping I wouldn’t recognize her. However, I spotted the guilty-as-shit-looking redhead easily in that police lineup peeking out from behind Donna Fargo and Gram Parsons. “THAT’S HER,” I shouted, standing behind the two-way mirror. Not even her goggle-sized, circa ‘72 “Crocodile Rock” shades could throw me off. “IT WASN’T ME—I WASN’T THERE,” she cried out, fiddling nervously with the gold belt wrapped around the waist of her black satin boxing robe. But she definitely was the one I’d seen the night before, heisting the cotton candy factory across the tracks from the methadone clinic.

Making a speedy getaway from the crime scene, her driving had been erratic. Known to some within certain underworld circles as the “Chevrolet Angel,” she refused to pick a lane. The authorities soon were hot on her tail. She attempted to give ‘em the slip, but couldn’t outrun ‘em. Reportedly, she’d swerved to miss hitting a pedestrian as her ‘64 Malibu bolted up Austin Avenue, jumping the curb and crashing onto a Hollywood lawn just before the cops finally nabbed her. Noticing the mugshot in the next morning’s paper, I contacted the local authorities and was summoned to the station house downtown as a reliable eyewitness to the cotton candy caper.

“I’m not surprised,” the lead detective replied as I made my positive I.D. “She’s got a rap sheet a mile long,” he added with a sneer, swirling a Styrofoam cup of stale coffee. Being new in town, I was unfamiliar with this unusual, yet alluring suspect and her extensive record. Fortunately, I’m a quick study.

In short order, I realized I’d fallen into a bottomless rabbit hole. My super sleuth instincts first led me to an old abandoned Blockbuster warehouse just outside Denver in which I discovered a stockpile of discarded VHS tapes—endless hours of ironclad evidence documenting the woman’s reputation for assuming the identities of random strangers.

Internet surveillance footage of the singing / songwriting suspect performing with various partners prompted me to reach out to my vast music biz contacts. They ALL knew this gal—quite well. In fact, they each admitted to possessing deep personal affection for her, confessing further to a decades-long industry cover-up, one that dated back to the beginning of her longtime romantic involvement with a cat by the name of Rilo Kiley in ‘98, a non-monogamous relationship in which she apparently was afforded the freedom to “see other people.”

Subsequently, she was linked to such side lovers as The Postal Service and Nice As Fuck. Additional exploits involved trysts with the likes of Elvis Costello, She & Him, and Vampire Weekend. She’d engaged in somewhat indiscreet, televised, late-night rendezvous with several distinguished gentlemen courters, including Letterman, Colbert, Kimmel and Fallon. She’d also been seen frolicking with Beck and Benmont. She’d even bagged a Beatle during a recent job.

In a preliminary arraignment she claimed, “I ain’t got no kids. I ain’t got no roots.” But it was verified later that she does, in fact, have long-standing ties to the Los Angeles community and has birthed four consecutive bouncing baby Billboard-busters, two sets of rebellious twins. Rabbit Fur Coat and Acid Tongue both possessed Sybil-like personality traits: Emmylou by day, Courtney by night. Fetching blue-eyed blonds, The Voyager and On the Line each won hometown beauty pageants and were known to be loads of fun in the sack. However, double-bagging definitely was recommended. Highly.

The detective had been spot-on. This woman’s “rap sheet” was “a mile long.” Yet, despite the avalanche of available (and irrefutable) stats, ONE major question still loomed large with the general public: “WHO THE ‘F’ IS JENNY LEWIS?” 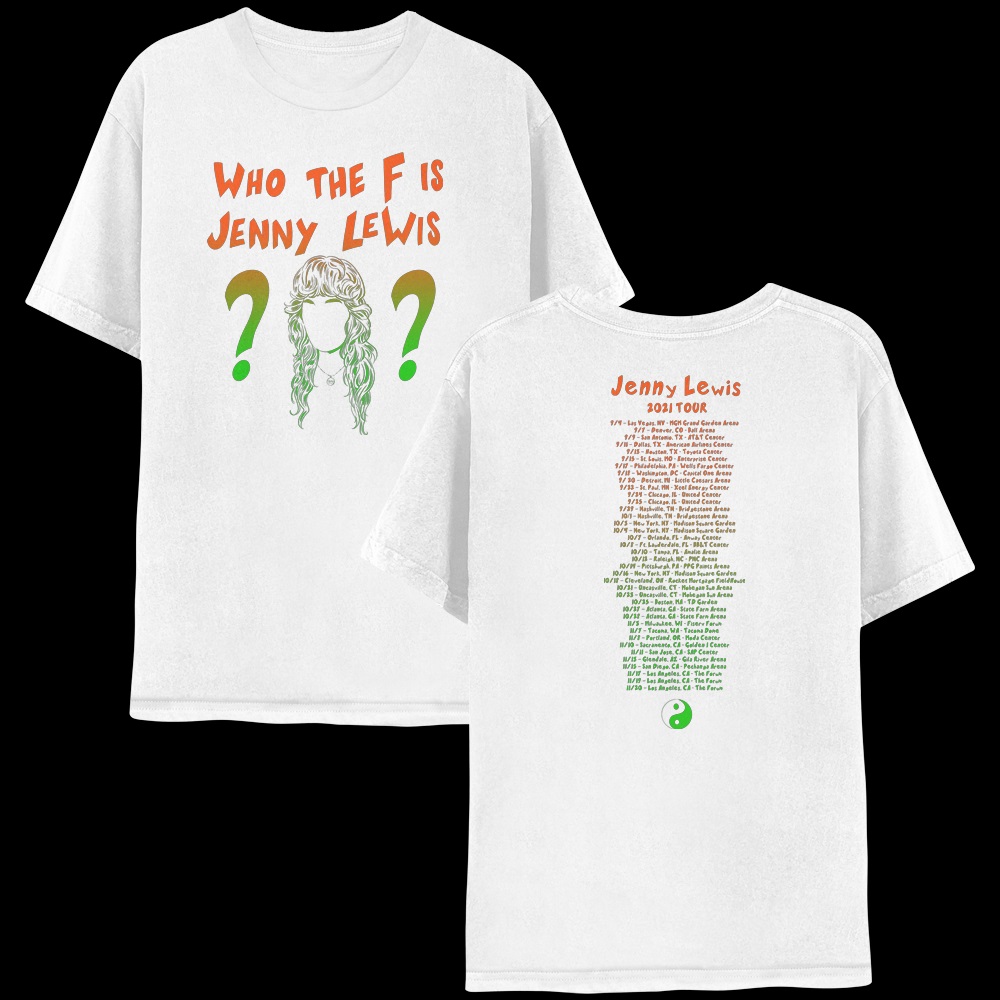 But recently, while released on bail, the brazen beauty finally blew her cover. In the process of pulling off her biggest and bravest job to date, she was spotted nightly by thousands (and thousands) of innocent bystanders, all eyewitnesses to her role as an accomplice alongside notorious mob boss Harry Styles on his Love on Tour mission. And after nearly 40 individual incidents, the word was out. The burning question had been answered. And seemingly EVERYBODY now knew “Who the ‘F’” Jenny Lewis was.

Fortunately, this story does have a silver lining. In the aftermath of her conviction in the cotton candy caper, Lewis currently is spending her 24-month probation period walking the straight and narrow, spreading her unique brand of puppy love across the land, rolling along like just one of the guys with her longtime road crew: Jack, the three Johns, a Spanish bottled suds distributor named Fernando, and a narcoleptic poet from Duluth. 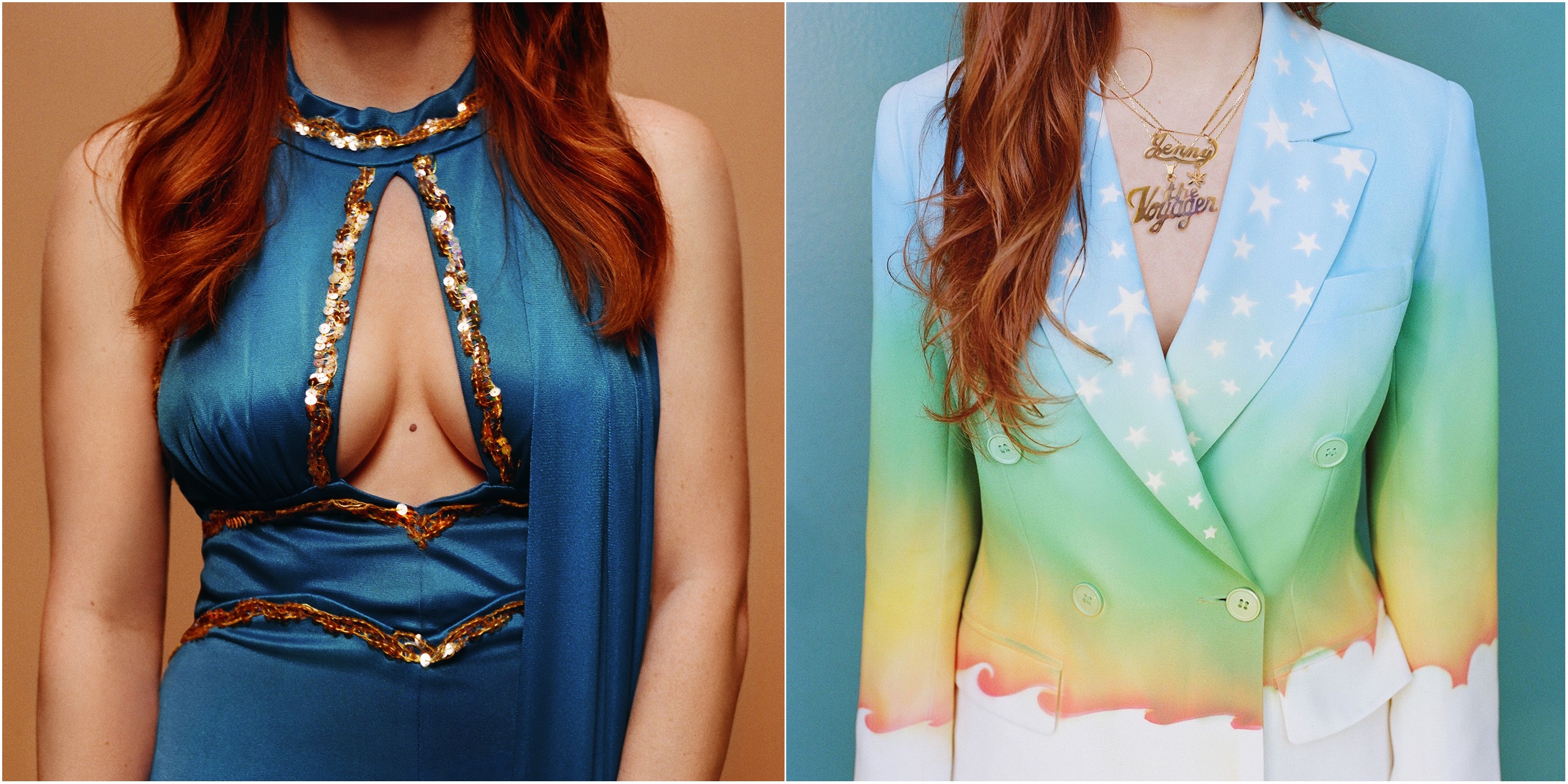 On the Line and The Voyager — loads of fun in the sack. However, double-bagging definitely is recommended.

In January 2022, Lewis will be sharing her personal testimony at the annual 30A Songwriters Festival in Walton County, Florida. Entitled Everybody, her highly-anticipated collab with The Cactus Blossoms drops in February. From there, perhaps a NEW baby Billboard-buster. Or maybe a book. A salacious tell-all in which she recounts how she almost got away with the perfect crime: the Great Cotton Candy Caper!