Yokai is a curious concept that doesn’t have a great analogue in western culture, but it is basically a collection of monsters and spirits that are generally benign to humans and are largely held to blame for an unusual occurrence in everyday life. A picture falls off the wall? A Yokai did it. Can’t find your keys? Yokai. And if you aren’t troubled by malevolent spirits? A Yokai is probably protecting you. The Yokai exist somewhere in between the giant monsters of Kaiju (Godzilla, Gamera, Rodan) and the ghosts and evil spirits of J-Horror (Ringu, Kawidan, Tomie). 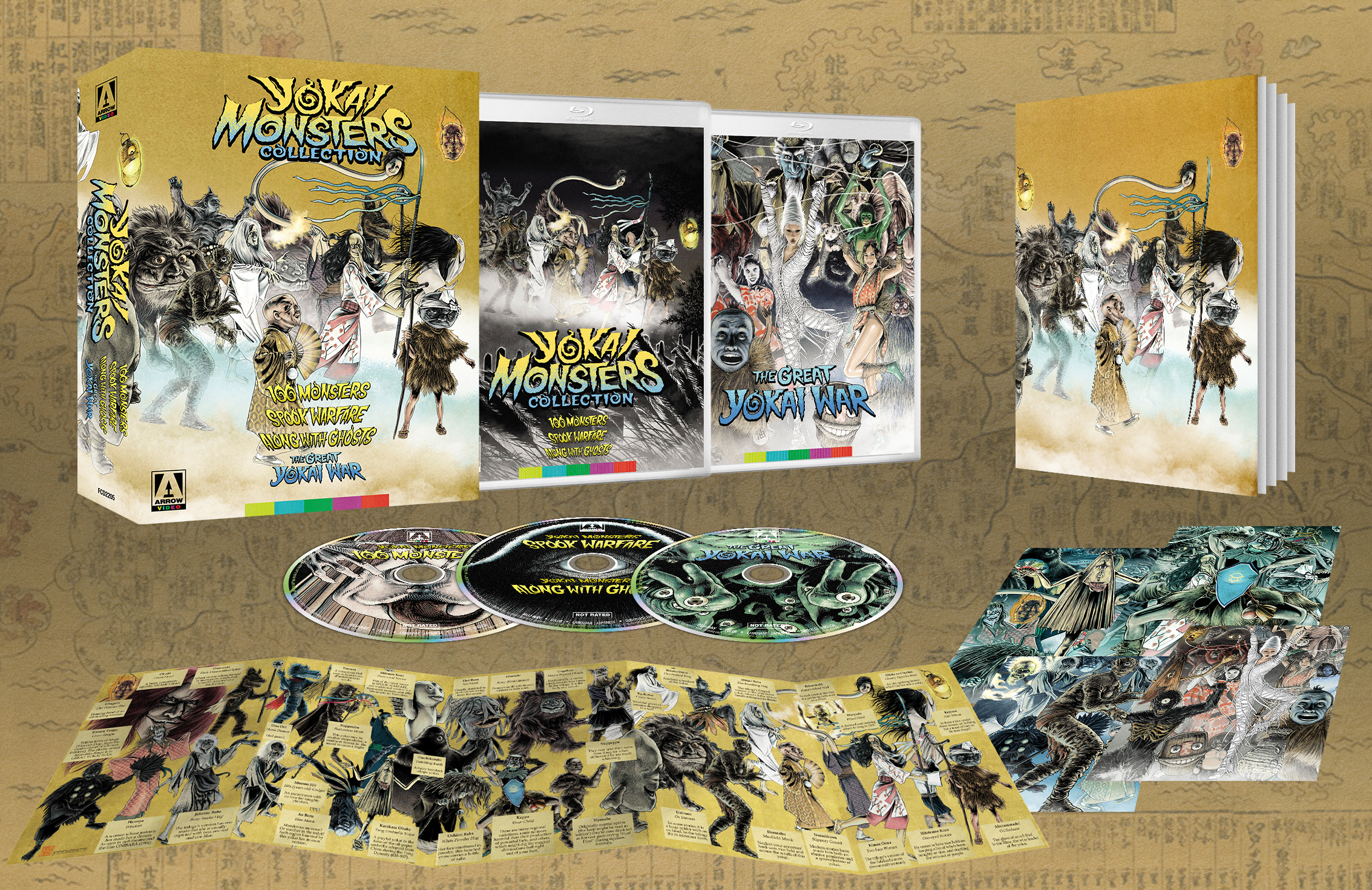 Arrow Video has gathered 4 classic Yokai films for the 3 Blu-ray Yokai Monsters Collection. This handsome set has the three Daiei Film Showa era films from directors Tetsuro Yoshida and Yoshiyuki Kuroda, as well as the 2005 reimagining from cult director Takashi Miike. The Yokai films are uniquely Japanese, even if many of the creatures populating the menagerie are appropriated from many cultures. The closest analogue for American audiences is probably the world of Sid and Marty Kroft who also combined creature suits and puppets to create spooky, yet mostly friendly, supernatural worlds for children. The denizens H.R. Pufnstuff’s magic island would feel right at home alongside the Kappa, Slit Mouthed Woman, Rokurokubi (Long Neck Woman), and Kasa-obake (umbrella monster).

The Yokai films basically follow one of two plot structures. 100 Monsters and Along with Ghosts follow the Daimajin trilogy where an evil samurai lord oppresses the village until the monsters arrive to right the wrongs and vanquish the evil. The other plot, used by Spook Warfare and The Great Yokai War involve a super powerful and decidedly non-Japanese demon whose arrival threatens to overpower the spirit world and wreak havoc on the human population. The peaceful if mischievous Yokai must band together to fight this invader and save both the human and spirit worlds of Japan. The films do have a sameness to them that make them a bit difficult to differentiate, but that is generally true of all program filmmaking and the familiarity of the plots and themes make them so effortlessly watchable and rewatchable.

Although these films have all had some previous level of release and presence in the west it has been with precious little context for non-Japanese audiences leading them to be disnessed as kitschy, kiddie fare the likes of Gamera or the more juvenile Godzilla movies (Godzilla’s Revenge, Godzilla Vs Gigan, or Godzilla Vs. Megalon). When viewed in Japanese and as folk tales rather than misguided attempts at horror or giant monster films their natural charms become evident. The context the Yokai stories need is provided in this set by the extensive liner notes and essays in the booklet with contributions from by Raffael Coronelli, Jolyon Yates, and Stuart Galbraith IV, who is always a welcome guide through the world of Japanese monsters, and from the essential documentary Hiding in Plain Sight. My advice is to watch this doc first and let Zack Davisson, Matt Alt, Lynda E. Rucker, Hiroko Yoda, and Kim Newman, introduce this magical world and all the spectral creatures who inhabit it. It will make the actual movies feel more magical when you aren’t trying to figure out what is happening, because the filmmakers have assumed a certain level of cultural literacy much in the same way that American audiences are assumed to know about zombies or vampires.